All you need to know about Chromecast

Chromecast is Google’s ingenious streaming media player device that lets you transmit what you see from your phone, tablet, or Chrome browser to your big-screen HDTV. This $35 device that plugs into your TV via HDMI port makes life convenient as ever, providing you with a simple way to cast your favorite TV shows, music, and movies from a mobile device or computer to the big screen.

Google’s first streaming device was innovated in July 2013 – Chromecast (1st generation). The Chromecast (2nd generation) and Chromecast audio – only version devices were introduced in Sep 2015 and now we have the latest version called Chromecast Ultra for 4K ultra HD support which was released on Oct 4th 2016.

While the Chromecast’s basic usage definition sounds interesting, it might arouse the curiosity of people to acquire more knowledge on how it works, what can it do and on what conditions and requirements will it work. This article can help you get what you are looking for and all that you need to know about Chromecast.

How this Stuff Works?

Chromecast devices run a simplified version of Google’s Chrome OS, and have a limited memory of 512 MB of RAM and 2 GB of storage. Take content that you were streaming on your phone/tablet and take it to the big screen.

In order to start using your Chromecast, just simply take it and plug it into your TV’s HDMI port. Now follow the simple instructions provided to connect it to an internet network. Now the device will start acting as a gateway to stream the media from the streaming apps on your mobile and cast it onto your TV.

After this set up is done, simply open up your favorite Chromecast compatible app on your phone. Now you will find the Supported apps display a Cast button, which you can press to connect with Chromecast as shown below for youtube app.

Just go ahead and tap that icon to select your Chromecast and start playing any media you want to be streamed to Chromecast. The Chromecast works by requesting the link to the content from the app on your device and streams it directly by using the internet. After this, you will only be able to see the content on the TV thereby making your device work like a remote to play/pause etc. This way, your phone or tablet’s resources aren’t hogged up with streaming tasks, and battery life doesn’t take a huge hit.

Which Apps can be Streamed?

The real utility of the device will always be tied to what you can actually see on the TV with it. It’s not just YouTube or Netflix that can do this but a wide collection of 300+ compatible apps allowing users to stream movies, play games etc.

What devices work with Chromecast?

Chromecast works well with both iOS and Android apps. It can run on with WiFi-enabled Android 4.1+ smartphones and tablets; iOS 8.0+ iPhone®, iPad®, and iPod®; Chrome for Mac® and Chrome for Windows®; and ChromeOS. However, it is a bad luck for the users with BlackBerry or Windows phones.

On the other hand, the Chromecast is compatible to televisions which have an HDMI input. Chromecast can work with most displays provided you have a converter, but it is designed to work with displays that have an HDMI port. Look at the back of your TV to identify which option(s) you have. You can find the details on the display port compatibility in this link.

How to Remote Control what you’re Streaming?

There is no physical remote for Chromecast. Most of the apps will have built-in volume controls for Chromecast which are however separate from the television’s master controls. If you have been using your phone as a remote control, there is a way to bypass the process of having to change the input to cast if your TV supports HDMI-CEC. They can automatically turn on the television and switch to the appropriate input when you start casting a video. But this is more of thumbs down since Chromecast doesn’t have a TV-based menu system; a proper remote wouldn’t do much good. 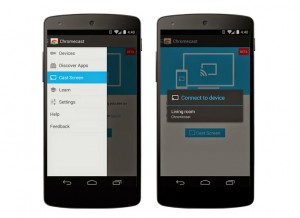 Mirroring is primarily used for watching content that doesn’t support Chromecast natively. It seems that the android users have the luck of screen mirroring on their phones and tablets running Android 4.4.2 or higher while the iOS users don’t seem to be. Laptops and desktop PCs can mirror any open browser tab in Chrome with the Google Cast extension . The quality of the stream can be unreliable, and it’s a major drain on battery life. Apple TV is great at mirroring your screen.

What can be played back Locally?

You can play back your locally stored photos, music or videos and even slide show presentations. To play music through your TV with Chromecast, download Google Play Music. Open the app, select the cast icon, choose Chromecast from the device list, and select what you want to play.

After the Google Photos are received in the Chromecast support, we can now be able to cast our pics from Google Photos on iOS, Android, and the PC to your TV. You can use third-party apps such as BubbleUPnP and AllCast which can play the locally stored photos, videos or music.

However, the quality of the picture will depend only on your device’s power, not on Chromecast. This is because the transcoding on the device is done by a server app when it comes to playing local content. Chromecast is a bit too underpowered to transcode HD media.

How is Chromecast Powered? 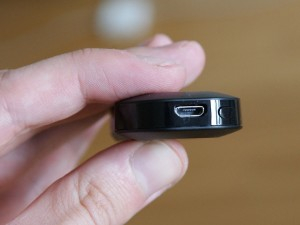 How can the Quality of streaming be Improved?

Chromecast requires a strong Wi-Fi connection to deliver streams that don’t buffer. You’ll need to be in or around the same room as the router to get the best streaming quality else you will experience slow connection issues. Not everyone has a super-fast Wi-Fi network but however there is a relatively better way to improve the quality of the streaming. 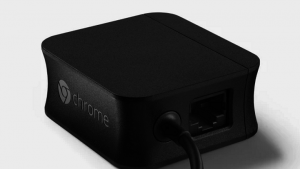 Google now has introduced an Ethernet adapter for Chromecast. The one end of the adapter includes a small Ethernet port. An Ethernet cable has to be connected to this port and the other end to a modem. The adapter will also have a USB port which has to be plugged into the Chromecast device. Then plug the Chromecast into the HDMI port and you are ready to do.

The quality of the streaming can be adjusted when casting from the Chrome browser according to our need. If Google Cast extension is installed then select the Cast icon on the top right side of your browser. Select Options and a new tab will open, allowing you to change settings. Choose from standard (480p), high (720p), and extreme (720p high bitrate). 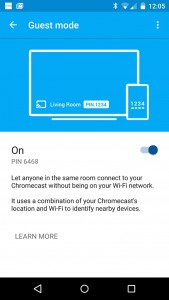 It is now easy to entertain your guests whenever you arrange for a social gathering. They get to decide what they want to watch without getting access to your Wi-Fi. Original the sharing model was such that once you attach a Chromecast to a given Wi-Fi network, then the Chromecast is available to all devices on that Wi-Fi network. Anyone who has the Wi-Fi password will be able to play what they want to from their device.

You no longer have to share your Wi-Fi password to enable guests to access the device. Turn on the guest mode and when your guest opens a Chromecast supported app in their Cast icon will be displayed in their application. One the Cast icon is clicked; casting to a ‘Nearby Device’ will be listed as an available option. If this option fails, the user can manually enter the four-digit PIN that will be displayed on the TV into the app’s settings on their device.

You can set up your favorite Chromecast background by using your own pictures or choose from google. In order to do these open the Google Cast app, go to the Devices tab and select the Chromecast you want to customize. In the top-right corner, tap the device card menu and select Backdrop Settings. Now you will manage what you choose to share by turning content categories on or off.

How to Play Games?

In addition to streaming video and audio, the appeal of being able to play games on a big screen is also made possible. You’ll first need to install some games that are designed for the Chromecast. The first step is to find a game to play. To find games on your smartphone or tablet, open up the new Chromecast app — install the Google Cast app for iPhone or Android. About 100 games for Chromecast can be found in Google Play store alone. 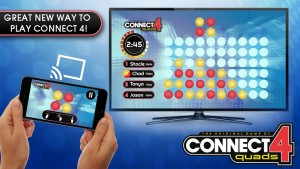 Users have a lot of choices these days to pick on the streaming devices they wish to buy. But so far, none was able to deliver a device better than Chromecast for the ease of use and the cross-platform compatibility at such an affordable price. If you are a person who always like to stay in your room and watch content on a big screen then, Chromecast may be the gadget for you.