Transmission of Light Through Fiber

In fiber optic communication, signals are transmitted through an optical fiber. This is based upon certain characteristics of light, namely refraction and total internal reflection.

When a light ray goes from a denser transmission medium to a rarer one or vice versa, then its direction changes at the interface of the two medium. This phenomenon is called refraction of light. 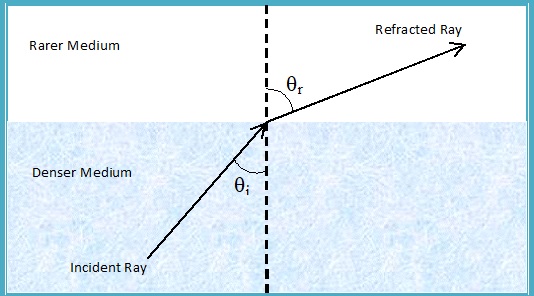 For light propagating from denser medium to rarer medium, if the angle of refraction is 〖90〗^0, the corresponding angle of incidence is called critical angleΘc.

If a light ray is an incident at the interface of two media with an angle greater than the critical angle, it is completely reflected back to the denser medium. This phenomenon is called total internal reflection.

Optical fibers use total internal reflection to transmit light. It has a solid core of dense glass surrounded by a less dense cladding. The light ray passing through the inner core is reflected back instead of being refracted to the rarer cladding.

Theoretically, there should not be any loss of light waves due to total internal reflection. However, attenuation of light occurs depending upon the wavelength of light waves and the properties of the glasses. The three commonly used wavelength bands for propagation are 0.85 microns, 1.30 microns, and 1.55 microns.

There are two modes of propagation of light −