A hierarchical model represents the data in a tree-like structure in which there is a single parent for each record. To maintain order there is a sort field which keeps sibling nodes into a recorded manner. These types of models are designed basically for the early mainframe database management systems, like the Information Management System (IMS) by IBM.

This model structure allows the one-to-one and a one-to-many relationship between two/ various types of data. This structure is very helpful in describing many relationships in the real world; table of contents, any nested and sorted information.

Data in this type of database is structured hierarchically and is typically developed as an inverted tree. The "root" in the structure is a single table in the database and other tables act as the branches flowing from the root. The diagram below shows a typical hierarchical database structure. 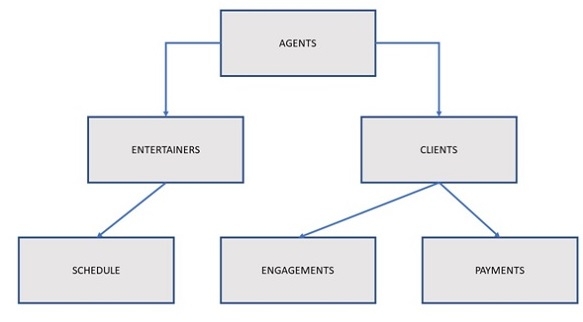 In the above diagram, an agent books several entertainers, and each entertainer, in return has his/her own schedule. It is the duty of an agent to maintain several clients whose entertainment needs are to be met. A client books engagement through the agent and makes payments to the agent for his services.

A relationship in this database model is represented by the term parent/child. A parent table can be linked with one or more child tables in this type of relationship, but a single child table can be linked with only one parent table. The tables are explicitly linked via a pointer/index or by the physical arrangement of the records within the tables.

A user can access the data by starting at the root table and working down through the tree to the target data. the user must be familiar with the structure of the database to access the data without any complexity.

Consider an example using the database diagram shown in the previous diagram. A user cannot enter a new record for the entertainer in the Entertainers table until the entertainer is assigned to a specific agent in the Agents table since a record in a child table (Entertainers) must be related to a record in the parent table (Agents). Therefore, this type of database suffers from the problem of redundant data. For example, if there is a many-to-many relationship between clients and entertainers; an entertainer will perform for many clients, and a client will hire many entertainers. This type of relationship in a hierarchical database cannot easily model, so developers must introduce redundant data into both the Schedule and Engagements tables.

The problem with this redundancy is that it can result in producing inaccurate information because it opens the possibility of allowing a user to enter a single piece of data inconsistently. 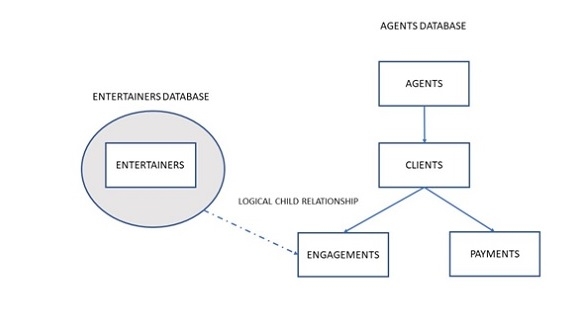 The hierarchical database suited well to the tape storage systems which is used by mainframes in the 1970s and was very popular in organizations whose database is based on those systems. But, even though the hierarchical database provided fast and direct access to data and was useful in several circumstances, it was clear that a new database model was needed to address the growing problems of data redundancy and complex relationships among data.

The idea behind this database model is useful for a certain type of data storage, but it is not extremely versatile and is confined to some specific uses.

For example, where each individual person in a company may report to a given department, the department can be used as a parent record and the individual employees will represent secondary records, each of which links back to that one parent record in a hierarchical structure.