1-persistent CSMA is an aggressive version of Carrier Sense Multiple Access (CMSA) protocol that operates in the Medium Access Control (MAC) layer. Using CMSA protocols, more than one users or nodes send and receive data through a shared medium that may be a single cable or optical fiber connecting multiple nodes, or a portion of the wireless spectrum.

In 1-persistent CSMA, when a transmitting station has a frame to send and it senses a busy channel, it waits for the end of the transmission, and transmits immediately. Since, it sends with a probability 1, the name 1 – persistent CSMA is given.

It is used in CSMA/CD (Carrier Sense Multiple Access with Collision Detection) systems including Ethernet.

The algorithm of 1-persistent CMSA is:

It has better throughput than ALOHA protocols.

There are chances of collisions in the following situations:

The throughput of a network system is defined as the number of successful transmissions per frame time. The following graph compares the throughput of 1-persistent CMSA with that of other MAC protocols: 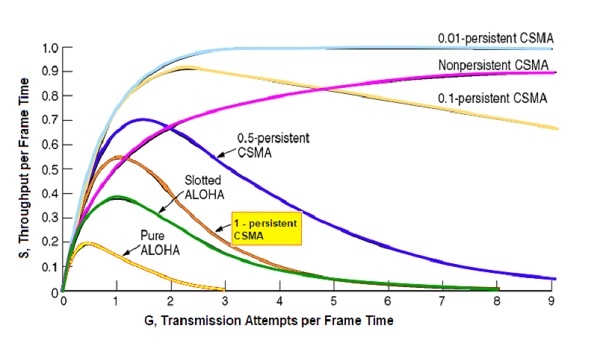