Learn about Hermeticism- the 4,000 year old secret occult teachings given to our ancestors by extraterrestrials

Hermeticism, also called Hermetism, is a religious and philosophical tradition based primarily upon writings attributed to Hermes Trismegistus ('Thrice Great'). These writings have greatly influenced the Western esoteric tradition and were considered to be of great importance during both the Renaissance and the Reformation. The tradition claims descent from a prisca theologia, a doctrine that affirms the existence of a single, true theology that is present in all religions and that was given by God to man in antiquity.

Much of the importance of Hermeticism arises from its connection with the development of science during the time from 1300 to 1600 AD. The prominence that it gave to the idea of influencing or controlling nature led many scientists to look to magic and its allied arts (e.g., alchemy, astrology) which, it was thought, could put Nature to the test by means of experiments. Consequently, it was the practical aspects of Hermetic writings that attracted the attention of scientists.

Isaac Newton placed great faith in the concept of an unadulterated, pure, ancient doctrine, which he studied vigorously to aid his understanding of the physical world. Many of Newton's manuscripts—most of which are still unpublished—detail his thorough study of the Corpus Hermeticum, writings said to have been transmitted from ancient times, in which the secrets and techniques of influencing the stars and the forces of nature were revealed.

In Hermeticism, the ultimate reality is referred to variously as God, the All, or the One. God in the Hermetica is unitary and transcendent: he is one and exists apart from the material cosmos. Hermetism is therefore profoundly monotheistic although in a deistic and unitarian understanding of the term. 'For it is a ridiculous thing to confess the World to be one, one Sun, one Moon, one Divinity, and yet to have, I know not how many gods.'

Its philosophy teaches that there is a transcendent God, or Absolute, in which we and the entire universe participate. It also subscribes to the idea that other beings, such as aeons,angels and elementals, exist within the universe.

Hermeticists believe in a prisca theologia, the doctrine that a single, true theology exists, that it exists in all religions, and that it was given by God to man in antiquity. In order to demonstrate the truth of the prisca theologia doctrine, Christians appropriated the Hermetic teachings for their own purposes. By this account, Hermes Trismegistus was (according to the fathers of the Christian church) either a contemporary of Moses or the third in a line of men named Hermes—Enoch, Noah, and the Egyptian priest-king who is known to us as Hermes Trismegistus.

The Magician displaying the Hermetic concept of 'As above, so below.'

These words circulate throughout occult and magical circles. 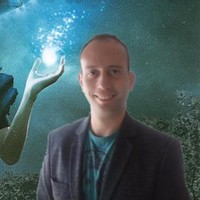 Hi :) I hope you'll let me share with you some wonderful teachings.

I hold a PhD in Mythology & Occultism from Bircham University. I've been researching different spiritual and religious teachings, ancient and modern texts and the occult for the past decade. I specialize in channeled teachings. These are teachings that were transmitted to people from beings on the other side!

I travelled the world in my quest to uncover hidden knowledge. I celebrated the new moon at a witch coven in New Zealand, I witnessed how a blind person begins to see in Mexico and helped ghosts complete their transition in Colombia. Research for me is not only about reading books, it's about people and culture.

I uncover hidden knowledge about different planes of existence, enhancing psychic abilities, manipulating energies, how to heal and perform miracles, what happens after death, how to initiate an out of body experience and even extraterrestrial teachings and philosophies.

These teachings are timeless and can help us find peace, tranquility and evolve spiritually. My goal in my courses is to help students find that inner peace and expand their consciousness.

I hope you'll let me become a friend and a guide to this crazy world of hidden and sacred knowledge.