In this chapter, we will explore how SED exactly works. To become an expert SED user, one needs to know its internals. SED follows a simple workflow: Read, Execute, and Display. The following diagram depicts the workflow. 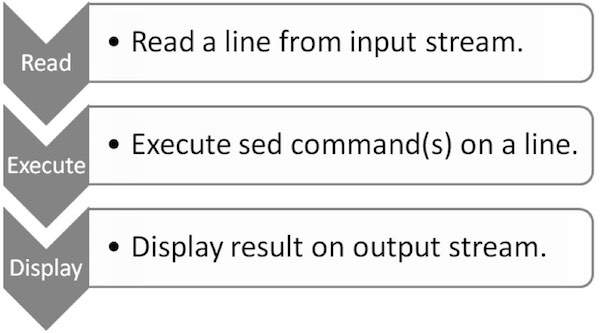 Let us create a text file quote.txt to contain a quote of the famous author Paulo Coelho.

To understand the workflow of SED, let us display the contents of the file quote.txt using SED. This example simulates the cat command.

When the above code is executed, it will produce the following result.

In the above example, quote.txt is the input file name and before that there is a pair of single quote that implies the SED command. Let us demystify this operation.

In the following example, SED accepts input from the standard input stream.

When the above code is executed, it will produce the following result.

Here, the first line is entered through keyboard and the second is the output generated by SED. To exit from the SED session, press ctrl-D (^D).