About the Prime Pack:

Welcome to our Python Premium Packs. It will grant complete & targeted education on one of the most up-to-date & most influential programming languages in the world. Python language has a trouble-free syntax that makes it very attractive to beginners and advanced levels. It’s additionally very bendy and scalable and has a very vibrant, international neighbourhood of users.

At Tutorials point, we have designed our premium pack in such a way that you can use python for just about anything - from beginner level to advanced level, Boot camp, understanding Statistics, and algorithms using python, machine learning, Pandas, Deep Learning with Python Interview & questions and much more.

The future of Python Programming:

Why Should you get this Prime Pack: 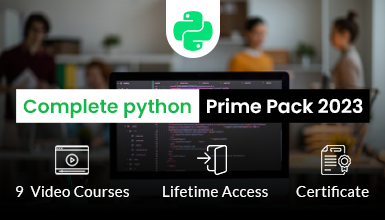 You Save
Gift this Prime Pack