Pool was originated in Great Britain. It is also formally known as pool billiards or pocket billiards. This is an indoor sport and played on a pool table. The table has six holes along the sides which are also called as receptacles or pockets. The main goal of the sport is to strike the balls into the receptacles. In this chapter we will discuss about the equipment of this sport.

The cue sports mainly depend on balls. There are normally three types of cue sports which are pool, snooker, and billiards. In each sport, different number of balls are used.

A rack is normally triangle in shape. It is used both in snooker and pool. If we are having an eight-ball pool, we can use a triangle rack and if we play a nine-ball pool, then the shape of rack will be of diamond shape. When the game starts, the rack is removed from the table.

Cue is a stick used to hit the ball. The length of the cue stick is around 55 inches. There is no fixed length as some cue sticks are around 58 inches. The taper down the tip is 0.5 inch. However, in case of snooker, the tip of the cue is normally smaller in comparison. 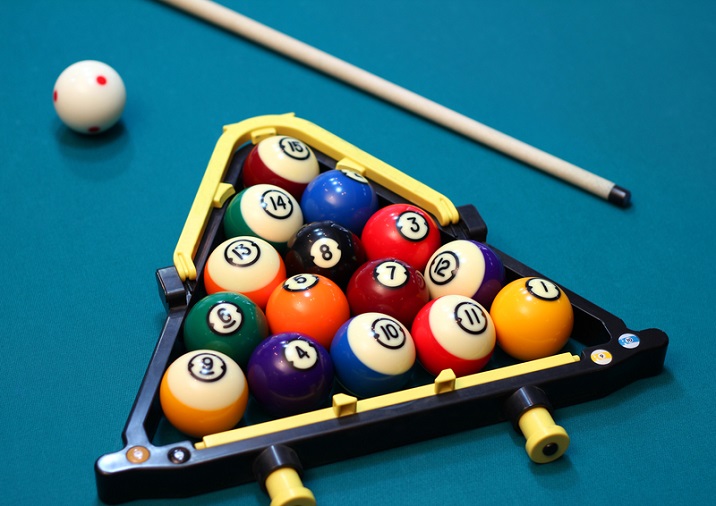 Bridge is also called a rake and is used sometimes as a supporting instrument for the cue stick. At some point of time during the match, the ball may be far away from the player to take a shot. At this time the player uses bridge as a support which makes it easier for him to play a shot.

Like the bridge, chalk is also not important equipment. It is optional for a player to use it. Chalk is rubbed on the tip of the cue stick. Normally, before every shot, a player rubs the tip with chalk to increase the friction between the tip and the ball in order to increase the hitting efficiency.

The table used for pool is a six pocket table, or we can say six hole table. The pockets are four in four corners and two pockets are in the middle of the two lengths of the table. The table is rectangular in shape having a length of 2.75 metres and breadth of 1.37 metres.