In the context of data storage, serialization is the process of translating data structures or object state into a format that can be stored (for example, in a file or memory buffer) or transmitted and reconstructed later.

In serialization, an object is transformed into a format that can be stored, so as to be able to deserialize it later and recreate the original object from the serialized format.

Pickle is operationally simplest way to store the object. The Python Pickle module is an object-oriented way to store objects directly in a special storage format.

What can it do?

What pickle can’t do?

In short we can say, pickling is a way to store and retrieve data variables into and out from files where variables can be lists, classes, etc.

To Pickle something you must −

where 3rd argument protocol is optional To unpickling something you must −

Based on above procedure, below is an example of “pickling”.

So, in the example above, we have created an instance of a Cat class and then we’ve pickled it, transforming our “Cat” instance into a simple array of bytes.

This way we can easily store the bytes array on a binary file or in a database field and restore it back to its original form from our storage support in a later time.

Also if you want to create a file with a pickled object, you can use the dump() method ( instead of the dumps*()* one) passing also an opened binary file and the pickling result will be stored in the file automatically.

The process that takes a binary array and converts it to an object hierarchy is called unpickling.

The unpickling process is done by using the load() function of the pickle module and returns a complete object hierarchy from a simple bytes array.

Let’s use the load function in our previous example.

JSON(JavaScript Object Notation) has been part of the Python standard library is a lightweight data-interchange format. It is easy for humans to read and write. It is easy to parse and generate.

Because of its simplicity, JSON is a way by which we store and exchange data, which is accomplished through its JSON syntax, and is used in many web applications. As it is in human readable format, and this may be one of the reasons for using it in data transmission, in addition to its effectiveness when working with APIs.

Python makes it simple to work with Json files. The module sused for this purpose is the JSON module. This module should be included (built-in) within your Python installation.

So let’s see how can we convert Python dictionary to JSON and write it to a text file.

Reading JSON means converting JSON into a Python value (object). The json library parses JSON into a dictionary or list in Python. In order to do that, we use the loads() function (load from a string), as follow −

Below is one sample json file,

Above content (Data1.json) looks like a conventional dictionary. We can use pickle to store this file but the output of it is not human readable form.

JSON(Java Script Object Notification) is a very simple format and that’s one of the reason for its popularity. Now let’s look into json output through below program. 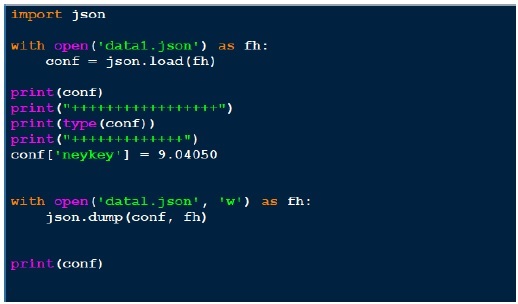 Above we open the json file (data1.json) for reading, obtain the file handler and pass on to json.load and getting back the object. When we try to print the output of the object, its same as the json file. Although the type of the object is dictionary, it comes out as a Python object. Writing to the json is simple as we saw this pickle. Above we load the json file, add another key value pair and writing it back to the same json file. Now if we see out data1.json, it looks different .i.e. not in the same format as we see previously.

To make our Output looks same (human readable format), add the couple of arguments into our last line of the program,

Similarly like pickle, we can print the string with dumps and load with loads. Below is an example of that, 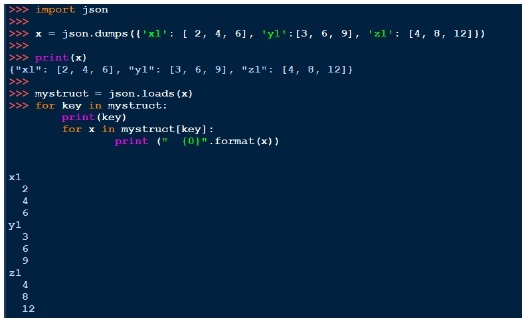 YAML may be the most human friendly data serialization standard for all programming languages.

YAML is an alternative to JSON −

As yaml is not a built-in module, we need to install it manually. Best way to install yaml on windows machine is through pip. Run below command on your windows terminal to install yaml,

On running above command, screen will display something like below based on what’s the current latest version.

To test it, go to the Python shell and import the yaml module, import yaml, if no error is found, then we can say installation is successful.

After installing pyaml, let’s look at below code,

Above we created three different data structure, dictionary, list and tuple. On each of the structure, we do yaml.dump. Important point is how the output is displayed on the screen. 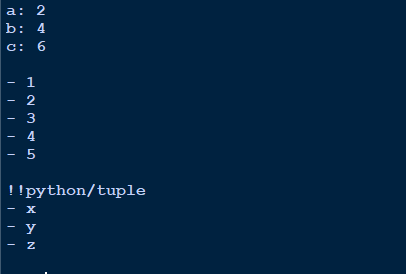 Tuple is indicated first with !!Python/tuple and then in the same format as lists.

So let’s say I have one yaml file, which contains,

Now let’s write a code to load this yaml file through yaml.load function. Below is code for the same.

As the output doesn’t looks that much readable, I prettify it by using json in the end. Compare the output we got and the actual yaml file we have. 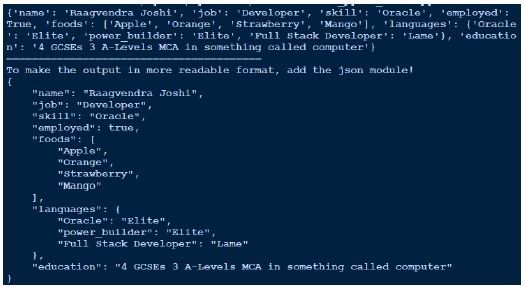 One of the most important aspect of software development is debugging. In this section we’ll see different ways of Python debugging either with built-in debugger or third party debuggers.

The module PDB supports setting breakpoints. A breakpoint is an intentional pause of the program, where you can get more information about the programs state.

To set a breakpoint, insert the line

We have inserted a few breakpoints in this program. The program will pause at each breakpoint (pdb.set_trace()). To view a variables contents simply type the variable name.

Press c or continue to go on with the programs execution until the next breakpoint.

Eventually, you will need to debug much bigger programs – programs that use subroutines. And sometimes, the problem that you’re trying to find will lie inside a subroutine. Consider the following program.

Now on running the above program,

We can use ? to get help, but the arrow indicates the line that’s about to be executed. At this point it’s helpful to hit s to s to step into that line.

This is a call to a function. If you want an overview of where you are in your code, try l −

You can hit n to advance to the next line. At this point you are inside the out_squared method and you have access to the variable declared inside the function .i.e. x and y.

So we can see the ^ operator is not what we wanted instead we need to use ** operator to do squares.

This way we can debug our program inside the functions/methods.

The logging module has been a part of Python’s Standard Library since Python version 2.3. As it’s a built-in module all Python module can participate in logging, so that our application log can include your own message integrated with messages from third party module. It provides a lot of flexibility and functionality.

Messages are written and logged at levels of “severity” &minu

Let’s looks into below simple program,

Above we are logging messages on severity level. First we import the module, call basicConfig and set the logging level. Level we set above is INFO. Then we have three different statement: debug statement, info statement and a warning statement.

And in the Output we can see,

Also the default behavior means if we don’t set any logging level is warning. Just comment out the second line from the above program and run the code.

We can also save the log messages into the file.

Now all log messages will go the file (logging.log) in your current working directory instead of the screen. This is a much better approach as it lets us to do post analysis of the messages we got.

We can also set the date stamp with our log message.

Benchmarking or profiling is basically to test how fast is your code executes and where the bottlenecks are? The main reason to do this is for optimization.

Python comes with a in-built module called timeit. You can use it to time small code snippets. The timeit module uses platform-specific time functions so that you will get the most accurate timings possible.

So, it allows us to compare two shipment of code taken by each and then optimize the scripts to given better performance.

The timeit module has a command line interface, but it can also be imported.

There are two ways to call a script. Let’s use the script first, for that run the below code and see the Output.

Above we use two different method .i.e. by subscript and get to access the dictionary key value. We execute statement 1 million times as it executes too fast for a very small data. Now we can see the index access much faster as compared to the get. We can run the code multiply times and there will be slight variation in the time execution to get the better understanding.

Another way is to run the above test in the command line. Let’s do it,

Above output may vary based on your system hardware and what all applications are running currently in your system.

Below we can use the timeit module, if we want to call to a function. As we can add multiple statement inside the function to test. 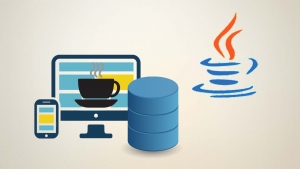 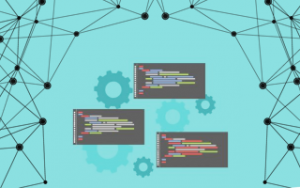 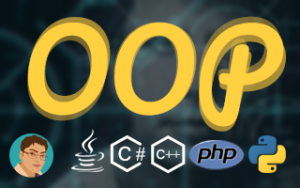 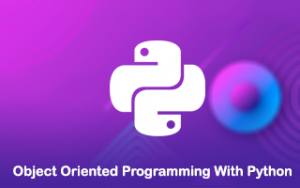 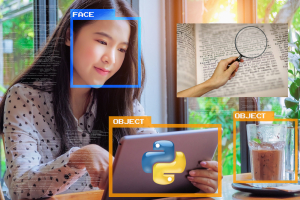