Mid-Level Managers - Evolution Of a Team

Teams tend to have a unique identity of their own and may vary across different sizes with respect to requirement. However, even the most diverse teams will end up having some common factors that can be generalized for all teams. These factors are the driving forces behind teams managing to work with one another, despite having a very different approach to work. The midlevel managers thrive on these similar grounds to use the workplace efficiently in delivering results.

Keeping this in mind, Dr. Bruce Tuckman came up with a theory explaining the process of development of teams when they start working together. He called it the Four Stages of Team Development. In 1970, he realized that all teams will have to end working on an assignment one time or the other. It may so happen that the assignment would continue, but the team dismantles to form a new team. Keeping this in mind, he later added a fifth step to it, “Adjourning”. According to him, the steps for team development are −

This stage includes introduction of team members to one another, learning about their areas of expertise and getting comfortable with their working style. Here, the information shared about the team members focuses mostly on skills acquired, strengths and weaknesses of members.

It is one of the most difficult stages among five stages. Using the information that the teammates had shared with one another in the Forming Stage; the feedback is collected and shared on the basis of their real behaviour in their workplace or in the vicinity of their work place.

In this step, all those members of the teams who have already been cleared through various challenges and objectives on their journey to this stage, will be given unique scenarios and they have to come up with new strategies and new ways to tackle challenges. A complete survey is then performed on how and when the challenges were faced and resolved.

By the end of this stage, different team members would have sorted out their interpersonal issues and finally started to perform as a team. They will be doing this with a collective focus on completing the tasks that they are responsible for. They start applying various strategies and tactics to achieve their collective goals and challenges. 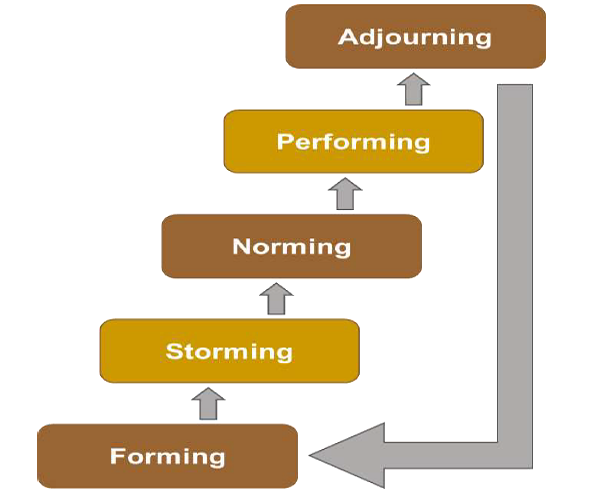 This is the last and final stage of the evolution of a team. Here, the teams will submit their outcomes for reviews and plan their upcoming steps on the basis of the feedback that the management provides. A team may take its next step by applying knowledge acquired from performing tasks with others. The outcomes of these teams are used by others as reference for any such similar work to be done in the future.

As mid-managers have a look at the aforementioned steps, they will see that these five steps can be collectively applied to any kind of team that works on any long-term or short-term assignments. However, the amount of time taken and the intensity of effort implemented may vary from one team to another.