Sensors and Actuators in IOT - Overview

Getting Started with Arduino UNO - the first microcontroller based generic board

Become an expert in IoT in shortest possible time.

Most IOT courses focuses on one IOT device, this is an ultimate bundled course focuses on with multiple devices (Arduino UNO, Node MCU - 8266/32 and Raspberry Pi) and would truly stand out in the crowd.  By this, learner would appreciate & able to choose the IOT device best suited for an application .

Few of the unique features of the course are:

All in one course

Once you have gone through the course, you would have a expert level understanding of not only IOT devices but also the some of the critical protocols used in IoT and its integration to cloud platform. More importantly, all this is explained through the widely used IoT language of Python.

Good luck on being early adopter of IOT and on your journey of exploring the next generation technology revolution! 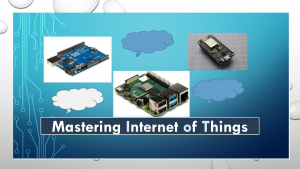