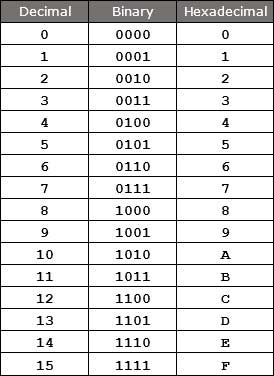 An IPv6 address is made of 128 bits divided into eight 16-bits blocks. Each block is then converted into 4-digit Hexadecimal numbers separated by colon symbols.

For example, given below is a 128 bit IPv6 address represented in binary format and divided into eight 16-bits blocks:

Each block is then converted into Hexadecimal and separated by ‘:’ symbol:

Even after converting into Hexadecimal format, IPv6 address remains long. IPv6 provides some rules to shorten the address. The rules are as follows:

Rule.2: If two of more blocks contain consecutive zeroes, omit them all and replace with double colon sign ::, such as (6th and 7th block):

IPv6 has three different types of Unicast Address scheme. The second half of the address (last 64 bits) is always used for Interface ID. The MAC address of a system is composed of 48-bits and represented in Hexadecimal. MAC addresses are considered to be uniquely assigned worldwide. Interface ID takes advantage of this uniqueness of MAC addresses. A host can auto-configure its Interface ID by using IEEE’s Extended Unique Identifier (EUI-64) format. First, a host divides its own MAC address into two 24-bits halves. Then 16-bit Hex value 0xFFFE is sandwiched into those two halves of MAC address, resulting in EUI-64 Interface ID. 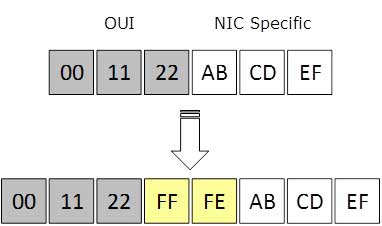 To convert EUI-64 ID into IPv6 Interface Identifier, the most significant 7th bit of EUI-64 ID is complemented. For example: 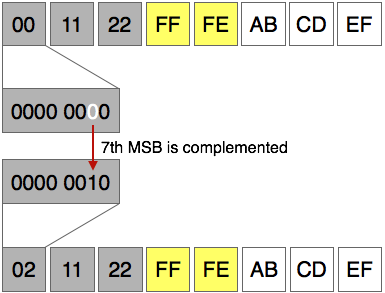 This address type is equivalent to IPv4’s public address. Global Unicast addresses in IPv6 are globally identifiable and uniquely addressable.

This type of IPv6 address is globally unique, but it should be used in local communication. The second half of this address contain Interface ID and the first half is divided among Prefix, Local Bit, Global ID and Subnet ID.

Prefix is always set to 1111 110. L bit, is set to 1 if the address is locally assigned. So far, the meaning of L bit to 0 is not defined. Therefore, Unique Local IPv6 address always starts with ‘FD’. 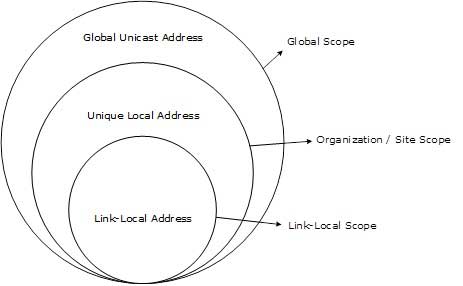 The scope of Link-local address is limited to the segment. Unique Local Address are locally global, but are not routed over the Internet, limiting their scope to an organization’s boundary. Global Unicast addresses are globally unique and recognizable. They shall make the essence of Internet v2 addressing.