Horse racing is one of the ancient sports in the history of mankind. It was able to register its name in the list of those few games, who have managed to gain popularity across the globe. From three quarters of a mile to 22-mile thoroughbred, horse racing is the most popular form of racing today. 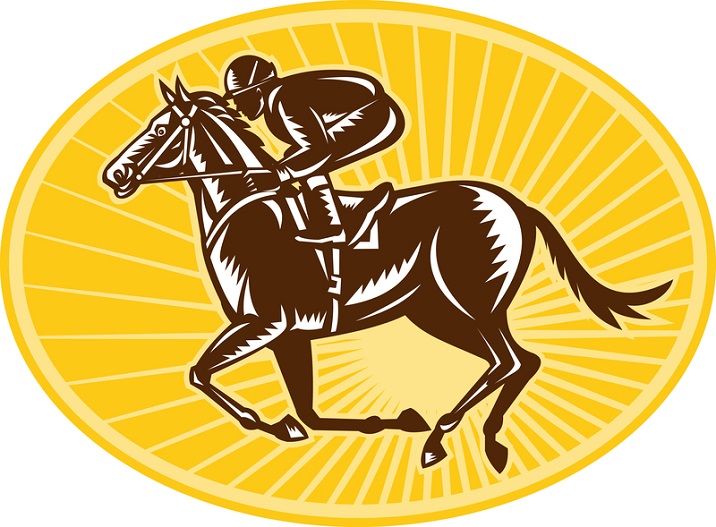 In this game several jockeys try their luck with their horses. Their aim is to win the race by making your horse ride efficiently and as fast as they can. Winning only one match does not get you fame. Consistency does matter. So, the more number of continuous wins will fetch that jockey a lot of respect in his fraternity.

Making a connection with the mythological facts regarding horses, it is believed that the game was played between Odin the god and giant Hrungnir. Archeological facts suggest that by 648 BC, Greeks had introduced horse racing in their Olympic games. From this fact, one can easily guess the history and the popularity of this game. Not only Greece but also Syria, Babylon and Egypt had admired this game since that era. They used to compete horse racing by attaching chariots to them. 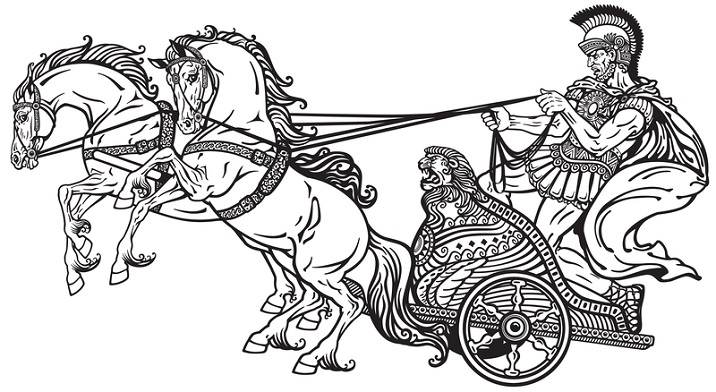 There were grievous injuries and death in some cases, which were the major risks that the rider and their horse were facing in chariot racing. Then, Romans who along with chariot races, popularized mounted horse racing. As the popularity rose the demand of more skilful horses came into the picture, which in turn brought hybrid horses into the market.

Horse racing is widely admired all over the world. It has so much charisma that people of all ages cannot stop themselves from watching the powerful bodies racing to their maximum potential. United Kingdom followed by United States of America are the trending countries, where this game has a tremendous fan following. 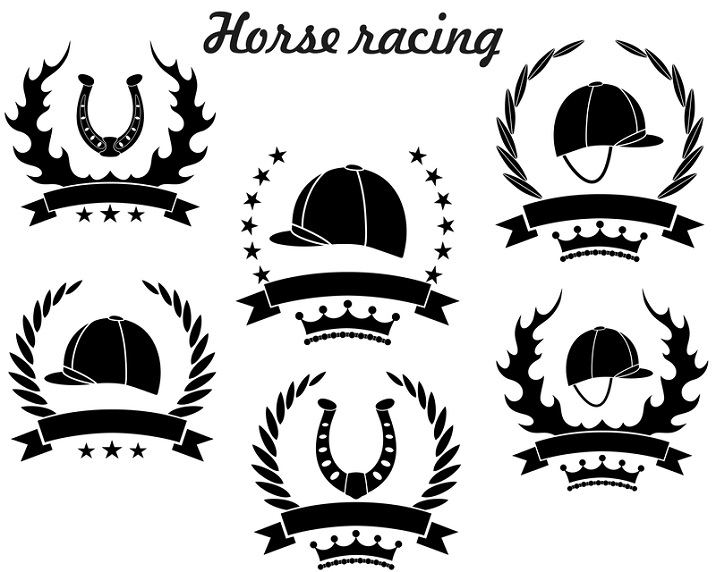 Similarly, Canada is also popular for this game. The famous horse of Canada is called as the “Northern dancer”. There are several European countries like Belgium, France, Great Britain, Hungary, Ireland, Italy, who are active participants. Some of the first races in Hungary can be dated back to 1827 and France has the biggest racing industry than any other countries in Europe.

Asian countries like China, India, Singapore and UAE are also known for their keen interest in organizing this game throughout the calendar year. India is known to be the oldest country in Asia, where horse racing is believed to be conducted under rules since almost two centuries. In 1977, the first race course was set up in Madras (now Chennai).

Adding to the list, Dubai is famous for organizing the prestigious Dubai World Cup, with a prized purse of 10 million dollars, making it the costliest race in the world. South Africa is not quite far in this. The history of horse racing in Africa can be traced back to year 1797. Durban July Handicap is the most premier event that is running in South Africa, since 1897.

South America too has its active participation in this game since so many years. In Argentina, this game is known as Turf. Most of the horses for these races are imported from South Africa, Australia, United Kingdom and France. New Zealand’s bloodstock industry generates 120 million dollars a year by exporting horses to Asia and Australia.

The best life experiences are those in which you enjoy your moments and at the same time, gain popularity. Horse racing can prove best to you, if you have a keen interest in it. To get started with horse racing one should be aware of the equipment and terms that will be encountered most often. 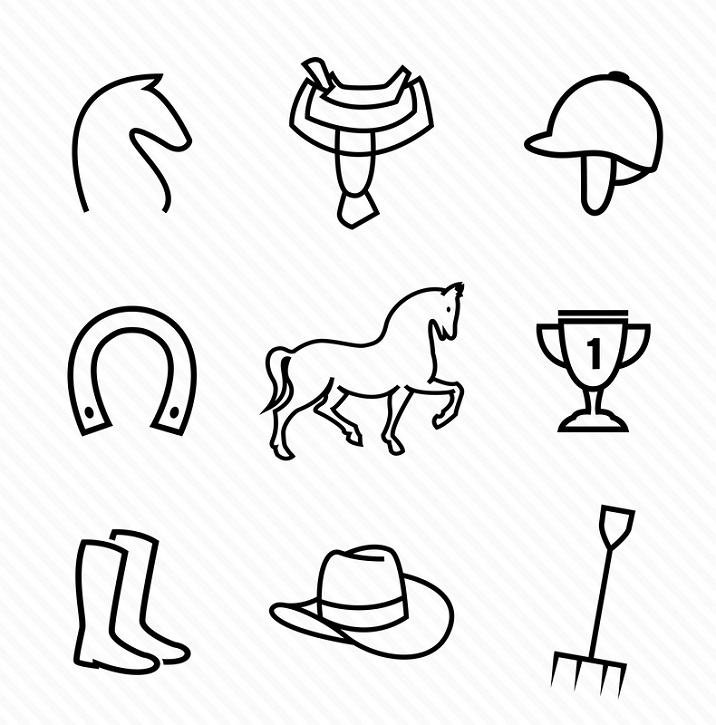 The equipment used in horse racing are listed below −

Horse Racing - How to Ride?

To ride a horse, you should be able to make a strong bond with them. Because they are animals and they tend to carry out your orders only if you are kind to them. So first you should learn how to tame them. Always give a gentle pat on their neck while riding them; it will make them sure that they are doing right. 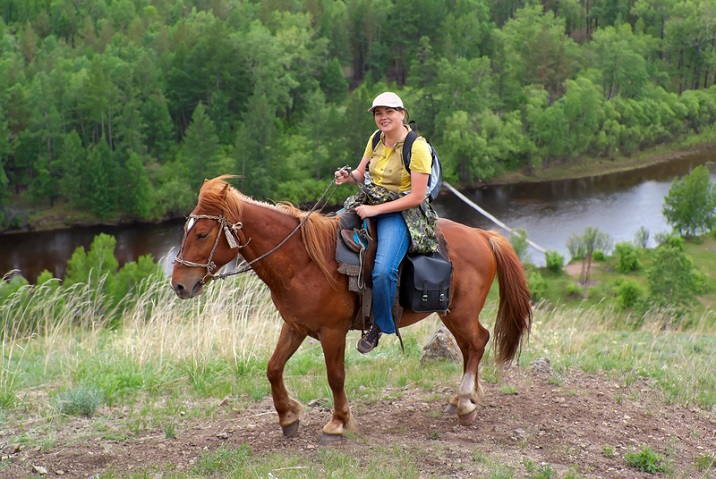 To understand them better, try to see the world through their perspective. This will help you a lot in understanding them. Upon completion of a task, reward them with a healthy treat. This will make a mark in their mind, so that they will try to perform better always.

How to Ride a Horse?

Stand at the left side of the horse and mark the stirrup. Now put your left leg on the stirrup. With one hand hold the reins properly making a firm grip on the front side of the saddle and put one hand behind the saddle. Now gently mount on the horse without kneeling on him. Make sure that the girth is tightened. 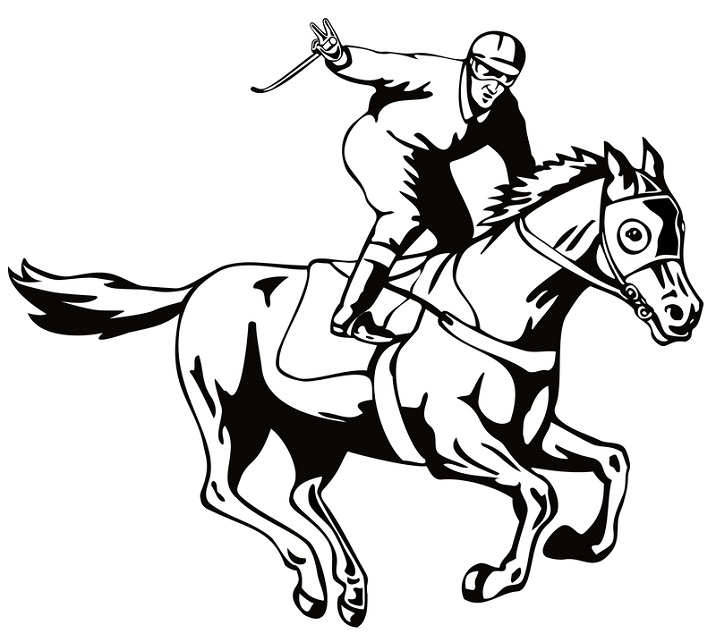 Stirrups should be of even size on the both sides. To balance yourself properly sit exactly at the middle of the saddle. Heels should be pushed downwards and most importantly make a straight erect body posture with the chin being up. This will give you level of confidence. Don’t keep long reins as this may put you in difficulty in controlling the horses. Instead keep them short.

How to Run a Horse?

Now it’s time for a walk. A gentle squeeze with your legs is enough to make your horse understand your order. In case your horse is a bit lazy, just give a small kick. Don’t ever try to rest your hand ever on the neck of the horse. Try to have a control on the rein by not moving your hands much, because this may accidentally move the horse towards right or left. 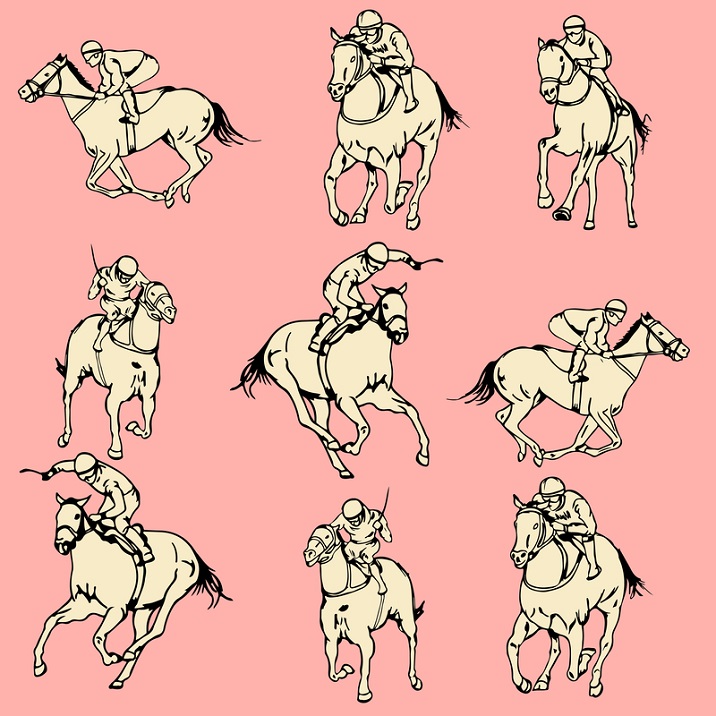 Once your horse starts to walk gradually, increase the speed by further squeezing, whipping or with small kicks. Same is the process while you go down. Do not pound yourself completely while slowing down. Another important aspect that every horse rider should follow every time after changing the reins is; checking for the diagonals, failing to which the rider would have difficult time while riding.

In this chapter, we will discuss in detail about the different types of horse racing. There are mainly four types of racing, which have been explained below

Most common form of horse racing is flat racing. Excluding some areas like Great Britain and Ireland where figure of eight tracks are followed, almost all flat racing tracks are oval in shape. Some use polytrack or Tapeta on their surface whereas some use dirt. The running off distance varies in between 400 meters to a maximum two and a half mile long. 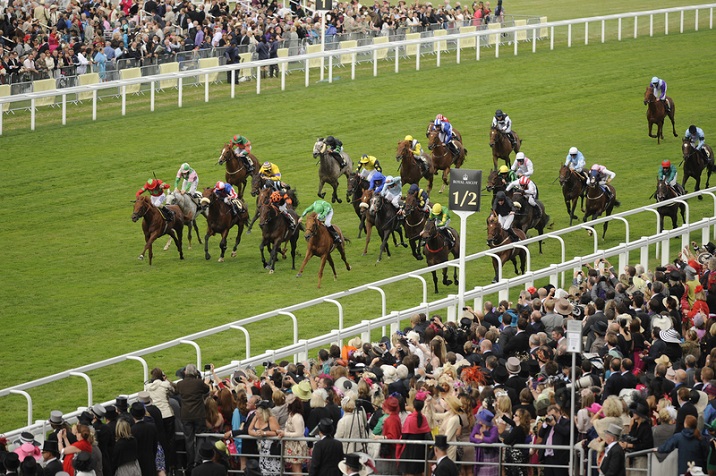 Same weight is given to all the horses in terms of fairness. The younger and female horses are also given allowances. These type of races where the weight distribution is similar are also called as conditional races. On the other hand, in some races different weights are allocated to different horses, known as handicap races.

As the name suggests the horse has to jump bigger obstacles in this race. Jump racing can be divided into two categories −

Between these two, Steeple Chasing is slightly more difficult. In Great Britain, Jump Racing is also popularly known as the National Hunt Racing. 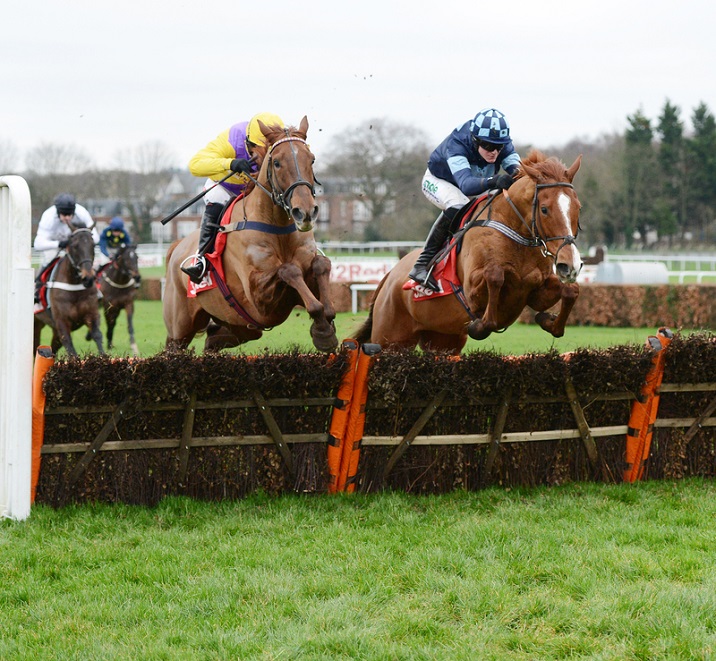 Initially, when a horse starts riding, it is put through flat racing. Gradually, the horse gets enough potential to jump bigger obstacles. At this time, he does hurdle racing. If the horse is believed to have more potential, then only it will be put through steeple chasing.

This is a type of racing in which the horse has to pull a sulky and needs to move in a particular gait. Two different types of gaits are usually employed, which are Trotting and Pacing. 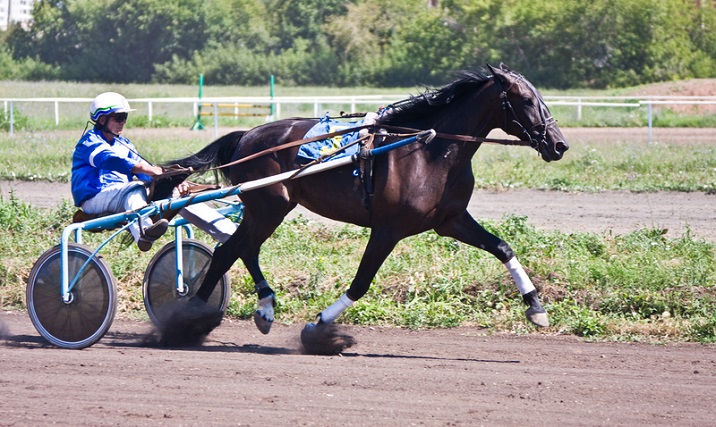 In Trotting, the horse moves his leg forward in diagonal pairs. Striking the ground continuously, the horse first tries to move the right leg to front and left leg to the hind and vice versa in the second step. On the other hand, in Pacing, the horse uses just the opposite diagonal pairs as compared to a trotter.

Unlike horse racing, here the distance is not small. The horse travels across the country ranging from a distance of 40-160 Kms. As it is a long way of travelling, veterinarians are posted at every successive distance to check the health status of these horses, which gives them further permit to continue their journey. 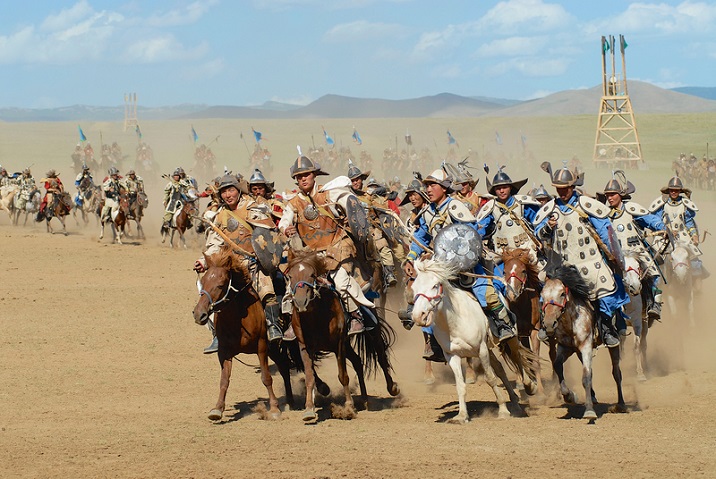 This massive distance is further subdivided into various categories depending on the length of travel. These are marked as stars and noted as CEI. Following are the CEI notations approved by the FEI.

The first horse that crosses the vet check line having fitness certificate through periodical check up from the veterinarian is declared as the winner. There is a particular speed limit for the horses to ride in a particular day. The key factors to determine a wining horse also includes its speed and the rate of recovery from periodical checkups.

To ensure proper conditioning of your horse, you should plan a good training schedule. Starting from a low session, gradually you have to train them from higher sessions, ensuring their good health in mind. The stages of training can go like −

Foals − Soon after getting birth, foals are handed over to their respective advocates. They use the method of imprinting, in which soon after their birth they are exposed to an atmosphere in which they have to lead rest of their life. They are exposed to human touch and voice. This type of nursing method ensures that the foals will learn the fact that humans are not harmful to them and they must be respected. 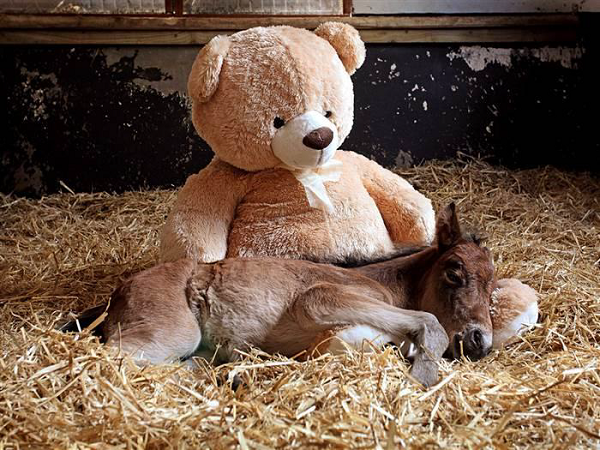 After 1-2 years of their birth, they are introduced to do some ground training. It makes their bones stronger. However, till the end of this training, it is advised not to ride them.

Following are the various training schedules for training −

The last stage is Backing which is the process of riding a horse. In this process, the horse is made comfortable, so that a human can ride on it. Firstly, they are given to pull a cart at the early age of 2 or 3 years. By the time they gain enough human trust and love, they are introduced to human riding.

There are a lot of injuries that can happen, if the rider is not careful. The list includes Bowed tendon, Splints, Osselets, neck fracture, and broken hips are some of the common injuries that both the jockey and the horse go through. According to recent study report made by Equine Injury Database, the fatal injury cases have increased by 20% in the year 2014 as compared to 2013. According to New York Times, every year out of 1000 horse riders, 600 face medical injury out of which 20% are very critical. 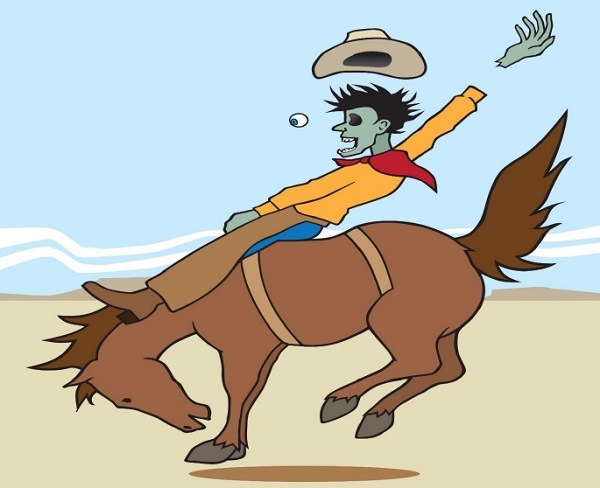 Nowadays, all the horse riding associations are advised to follow a certain set of check points to reduce the injury rates as far as possible.

After dogs, horses are known to be the most loyal animal to mankind. Horse racing, which has been started with an aim of game spirit, now has become the market of gambling and animal torture. This torture has many definitions pertaining to horses. For some, cruelty may be the way a rider rides his horse. Whereas, for some others it may be the poor environment and lack of quality nutrition in which the horses are made to train.

Some major criticisms being meted out on horses are −

For better future of horses, the industry needs to accept criticism positively. Every governing body should make sure that no horses are tortured during their training. Proper quality nutritious food should be provided and strict action should be taken against those who gamble at the market.

Among numerous races, the Flat racing and Steeple Chases are the most common and widely observed racing tournaments. Almost every nation has their own horse riding clubs and federations to govern them. Some major countries and tournaments are listed below.