Hadoop is an Apache open source framework written in java that allows distributed processing of large datasets across clusters of computers using simple programming models. The Hadoop framework application works in an environment that provides distributed storage and computation across clusters of computers. Hadoop is designed to scale up from single server to thousands of machines, each offering local computation and storage.

At its core, Hadoop has two major layers namely − 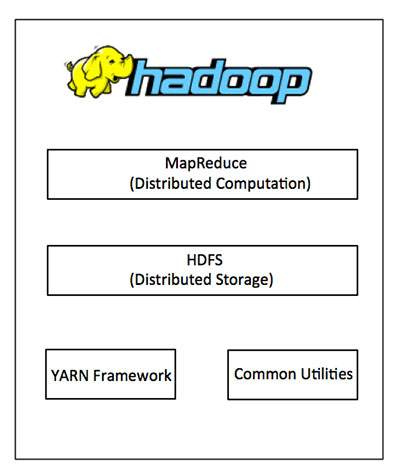 MapReduce is a parallel programming model for writing distributed applications devised at Google for efficient processing of large amounts of data (multi-terabyte data-sets), on large clusters (thousands of nodes) of commodity hardware in a reliable, fault-tolerant manner. The MapReduce program runs on Hadoop which is an Apache open-source framework.

How Does Hadoop Work?

It is quite expensive to build bigger servers with heavy configurations that handle large scale processing, but as an alternative, you can tie together many commodity computers with single-CPU, as a single functional distributed system and practically, the clustered machines can read the dataset in parallel and provide a much higher throughput. Moreover, it is cheaper than one high-end server. So this is the first motivational factor behind using Hadoop that it runs across clustered and low-cost machines.

Hadoop runs code across a cluster of computers. This process includes the following core tasks that Hadoop performs −