A GSM network comprises of many functional units. These functions and interfaces are explained in this chapter. The GSM network can be broadly divided into −

The MS consists of the physical equipment, such as the radio transceiver, display and digital signal processors, and the SIM card. It provides the air interface to the user in GSM networks. As such, other services are also provided, which include − 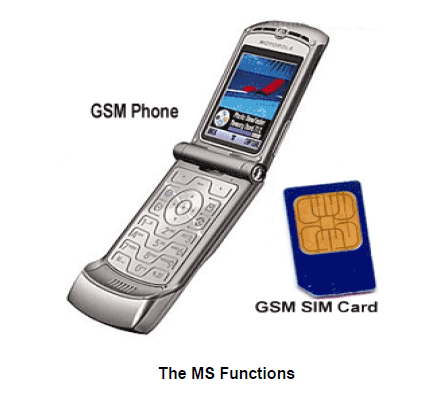 We will discuss more about GMS services in GSM - User Services.

The SIM provides personal mobility so that the user can have access to all subscribed services irrespective of both the location of the terminal and the use of a specific terminal. You need to insert the SIM card into another GSM cellular phone to receive calls at that phone, make calls from that phone, or receive other subscribed services.

GSM - The Base Station Subsystem (BSS)

The BSS is composed of two parts −

The BTS and the BSC communicate across the specified Abis interface, enabling operations between components that are made by different suppliers. The radio components of a BSS may consist of four to seven or nine cells. A BSS may have one or more base stations. The BSS uses the Abis interface between the BTS and the BSC. A separate high-speed line (T1 or E1) is then connected from the BSS to the Mobile MSC. 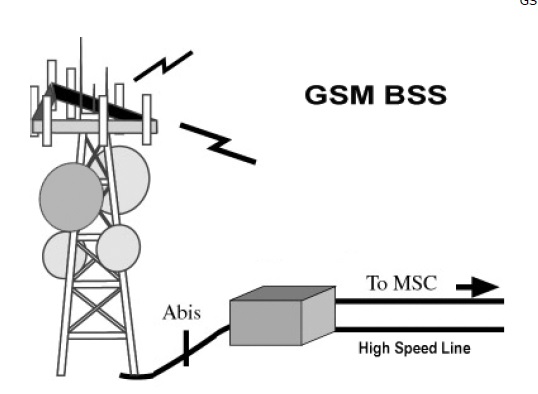 The Base Transceiver Station (BTS)

The BTS houses the radio transceivers that define a cell and handles the radio link protocols with the MS. In a large urban area, a large number of BTSs may be deployed. 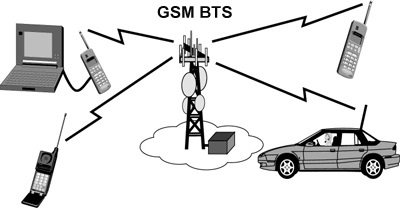 The BTS corresponds to the transceivers and antennas used in each cell of the network. A BTS is usually placed in the center of a cell. Its transmitting power defines the size of a cell. Each BTS has between 1 and 16 transceivers, depending on the density of users in the cell. Each BTS serves as a single cell. It also includes the following functions −

The Base Station Controller (BSC)

The BSC manages the radio resources for one or more BTSs. It handles radio channel setup, frequency hopping, and handovers. The BSC is the connection between the mobile and the MSC. The BSC also translates the 13 Kbps voice channel used over the radio link to the standard 64 Kbps channel used by the Public Switched Telephone Network (PSDN) or ISDN.

It assigns and releases frequencies and time slots for the MS. The BSC also handles intercell handover. It controls the power transmission of the BSS and MS in its area. The function of the BSC is to allocate the necessary time slots between the BTS and the MSC. It is a switching device that handles the radio resources.

The additional functions include−

The Network switching system (NSS), the main part of which is the Mobile Switching Center (MSC), performs the switching of calls between the mobile and other fixed or mobile network users, as well as the management of mobile services such as authentication. 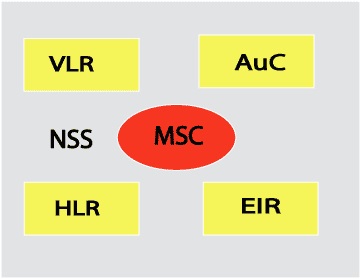 The HLR is a database used for storage and management of subscriptions. The HLR is considered the most important database, as it stores permanent data about subscribers, including a subscriber's service profile, location information, and activity status. When an individual buys a subscription in the form of SIM, then all the information about this subscription is registered in the HLR of that operator.

The central component of the Network Subsystem is the MSC. The MSC performs the switching of calls between the mobile and other fixed or mobile network users, as well as the management of mobile services such as registration, authentication, location updating, handovers, and call routing to a roaming subscriber. It also performs such functions as toll ticketing, network interfacing, common channel signaling, and others. Every MSC is identified by a unique ID.

The Authentication Center is a protected database that stores a copy of the secret key stored in each subscriber's SIM card, which is used for authentication and ciphering of the radio channel. The AUC protects network operators from different types of fraud found in today's cellular world.

The Equipment Identity Register (EIR) is a database that contains a list of all valid mobile equipment on the network, where its International Mobile Equipment Identity (IMEI) identifies each MS. An IMEI is marked as invalid if it has been reported stolen or is not type approved.

The operations and maintenance center (OMC) is connected to all equipment in the switching system and to the BSC. The implementation of OMC is called the operation and support system (OSS).

Here are some of the OMC functions−

The operation and Maintenance functions are based on the concepts of the Telecommunication Management Network (TMN), which is standardized in the ITU-T series M.30.

Following is the figure, which shows how OMC system covers all the GSM elements.

The OSS is the functional entity from which the network operator monitors and controls the system. The purpose of OSS is to offer the customer cost-effective support for centralized, regional, and local operational and maintenance activities that are required for a GSM network. An important function of OSS is to provide a network overview and support the maintenance activities of different operation and maintenance organizations.

A simple pictorial view of the GSM architecture is given below − 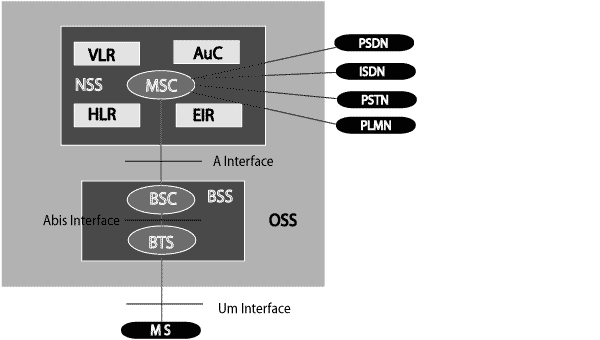 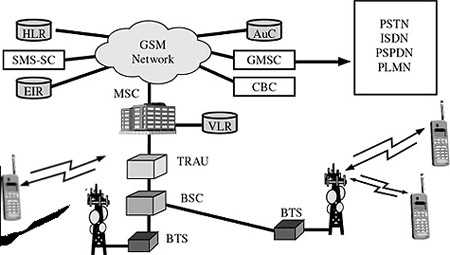 In a GSM network, the following areas are defined −