Diving is a water sport in which the strength, flexibility, and acrobatic skills of an individual get exercised. In this sport, the diver has to jump from a springboard that is situated at a certain height. When the player is in the air, he has to perform some acrobatic skill before diving in the swimming pool. As it requires acrobatic skill performance with a touch of gymnastic dance, hence often the diving players are dancers too.

The objective here is to jump from a prescribed height into the swimming pool from a springboard. While being in the air, you have to perform various acrobatic body movements. More the movements of the body done, more points you can fetch. This sport is played under men and women category.

A Brief History of Diving

Most of the traces of this sport were found to be in England during 1880’s. Apart from sport category, it was a favourite pass time for the ancient people. It is the English Armature swimming association which started the plunging championship in 1883. During the early 19th century, Sweden and Germany used to play this sport as a popular gymnasium category.

With the slow evolution and popularity of this sport, many variants such as Fancy diving and Plain diving started to evolve. Gradually jumping from height also gets popularity and first of such type of event was organised in 1893 in Highgate ponds. In 1904, plain diving was introduced into the Olympics whereas fancy diving was introduced in 1908’s London Olympic Games. 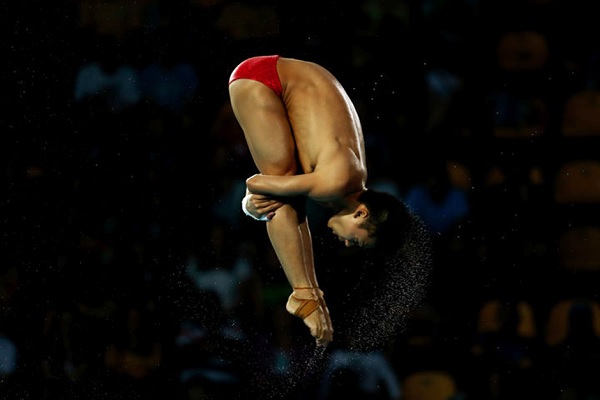 Diving comes under jumping and falling event. Since its introduction to Olympic Games, the popularity and demand of this sport grew exponentially in different nations. Many Asian and non-Asian countries have their active participation in this sport.

Similarly, many non-Asian countries have shown their talents in events like Summer Olympics. Countries like Mexico, Australia, and Canada dominate most of the diving competitions. In 2012 Summer Olympics, Llya Zakharov of Russia bagged the gold medal in men’s category while Wu Minxia of China bagged gold in women’s category in 3m springboard.

Diving is a process of jumping from a springboard into a pool of water by performing some twists and turns in the air. But it requires heavy control over body to perform this. Let’s first learn the basics of diving and then we will proceed to various techniques.

Variety of dives is performed by the athletes in the competition. However; there are four basic body positions, as explained below.

These positions are referred to by the letters A, B, C and D respectively. 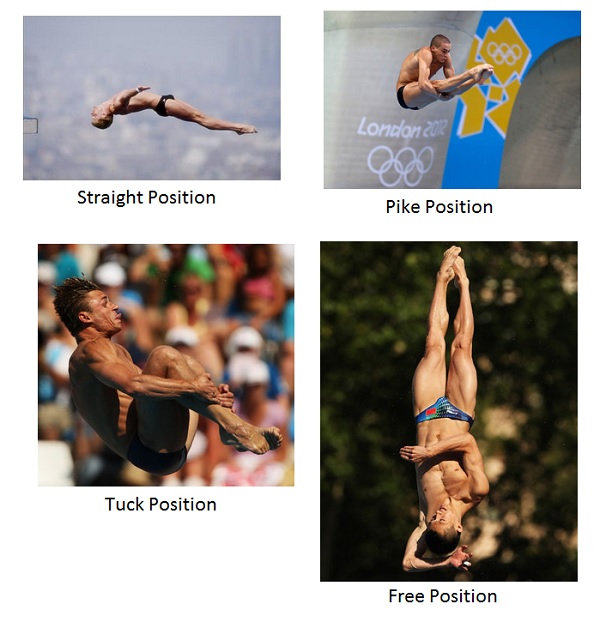 There are basically six types of diving groups related to springboard and platform diving. Among the six basic approaches, four are somersaulting towards or away from the springboard or platform. A forward approach and a backward press are also included in this. In the fifth approach, you can perform any of the above four approaches with twisting action and then finally with some more somersaults and twists, armstand is performed. 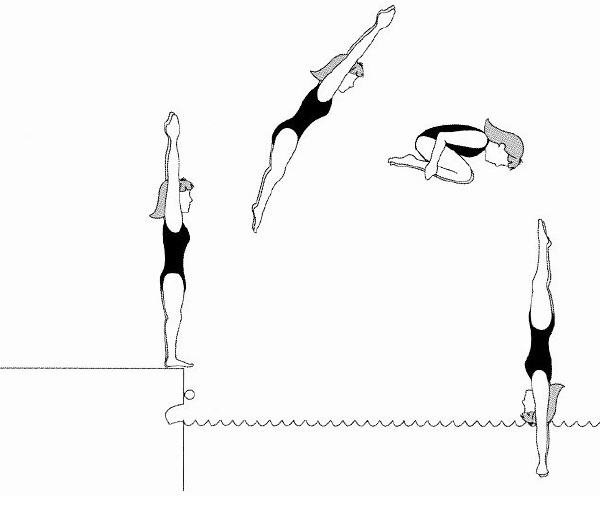 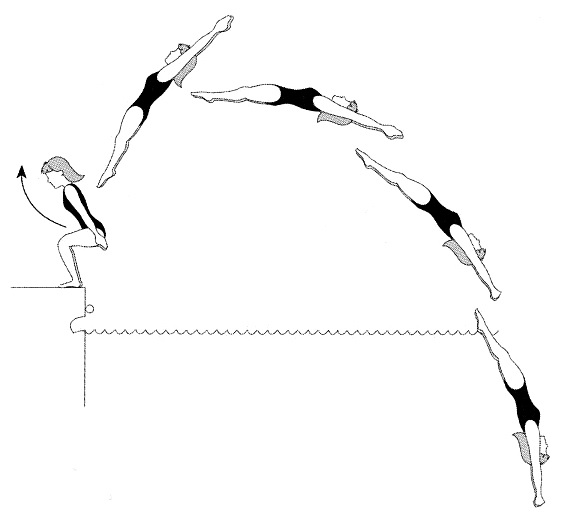 In this type of dive, a diver has to stand on the springboard with his back towards the water. After doing a backward press, the diver needs to take off. He has to perform half or three and a half somersaults after take-off. Some examples of the dives in backward group are −

In this type of dive, the diver faces the end of the board and water after doing a forward approach. He has to rotate back towards the board while moving forward. Some of the dives in this group are − 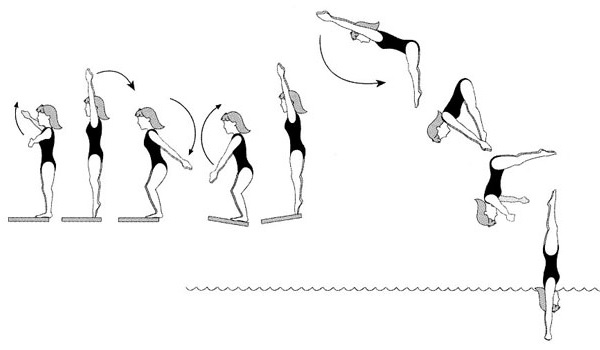 In this type of dive, the diver should face the water backwards but should rotate in forward direction. While moving away from the board, he has to perform three and a half somersaults. Some of the dives in this group are − 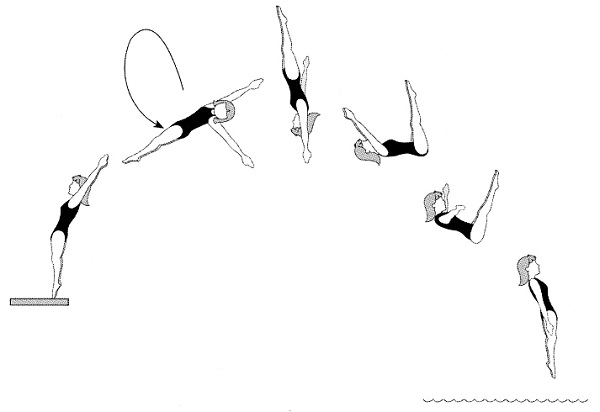 If a dive introduces twists in it then it is called as twist dive. This type of dive can be performed in forward, back, inward and in reverse direction. Twisting dives are also performed from an armstand. Example of dives in twisting category are − 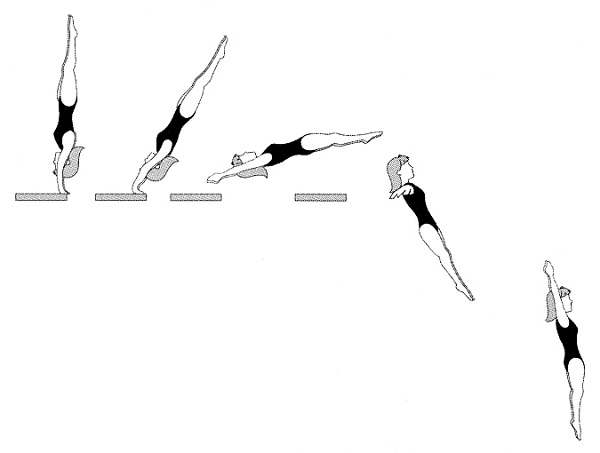 The level for performing armstand at platform is either 7.5 meters or 5 meters or 10 meters. In this type of dive, handstand can be performed at the edge of the platform in two ways

When both the feet of the diver leaves the ground, the dive is said to begin. Some of the examples of dives from this group are −

All the competitions organised under this category in Olympic Games should be played in 3-meter springboard. Minimum six dives should be completed by men and five by women. You can increase the level of difficulty in this sport as there is no limit for this. There are different types of categories under this such as-backward, forward, reverse and twisting. At least one dive should come from each category. Repetition of one dive is allowed for men in the sixth attempt but not in case of women. 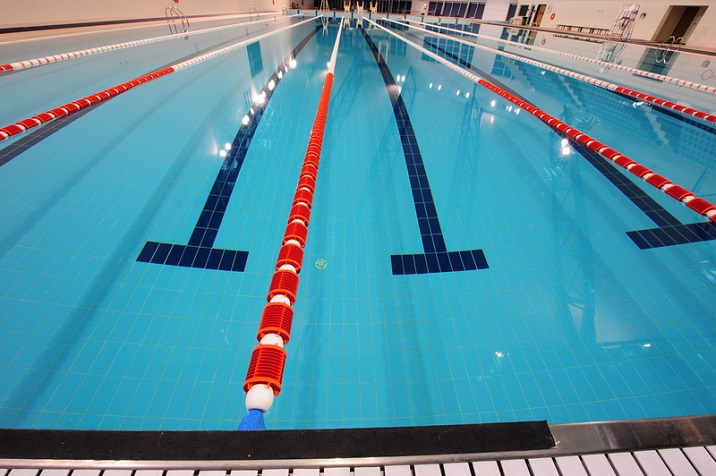 In this type of diving, minimum dives to be performed by men are six and five by women. There is no limit for the degree of difficulty over here. In a list of dives, no category can be repeated. The height of the platform to complete all the dives is 10 meters.

In this type of diving, men have to perform six dives while women have to perform five. A degree of difficulty is 2.0 which is assigned for first two dives in both men and women category. However the last three dives for women and last four dives for men have no limit on degree of difficulty. Both men and women need to perform one dive from each of the four categories. Among them, one dive should be made in forward direction and that too not by standing on the springboard. Among the six dives assigned to men, one dive can be repeated maximum twice.

This is because in accordance with law of conservation of energy, by changing the body angle with sufficient speed, the total amount of rotation can be varied. 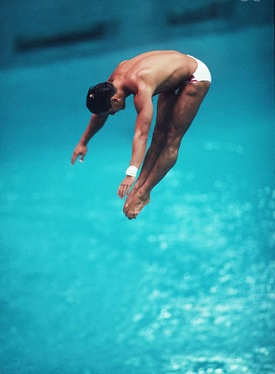 Trajectory is a path on which a diver travels from the springboard to the swimming pool. For safety purpose, it is good to maintain some distance from the diving board.

The athletes are penalized if there is much distance between him and the board. If you want to achieve highest height, then you must show your concern over these −

The Effect of Angular Momentum

FINA (Federation International de Nation) is the governing body of Diving. Every participating country has its own governing body to organize the sport successfully throughout the calendar.

Here is a list of some major events held in diving −

Let us now discuss briefly about some of the champions of diving and their career highlights. 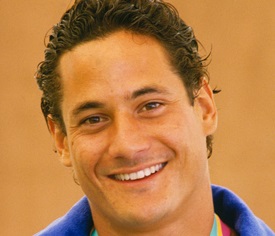 Greg Louganis is a competitor from United States. He is the only male to win two consecutive diving events in Olympic Games.

In his diving career, he has won 17 gold medals in various sub categories out of which four are in Olympics and five are in World Championships.

He has also won six golds in Pan American Games. Being one of the most proficient athletes, he received James E Sullivan award from the Armature Athletic Union. 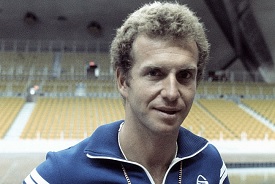 Klaus Dibiasi is a diver from Italy who is the winner of three golds in Olympics.

He also won one silver medal in 1968 Olympics in springboard. Along with this, he has won two golds and two silvers in World Championships and two golds in Summer Universiade. 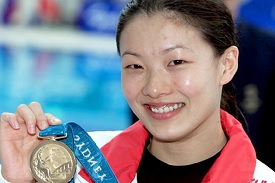 Fu Mingxia is a diver from China. She has won multiple gold medals in Olympics. With four Olympic golds and one silver, she is one of the best divers China has ever produced.

She became the youngest diving champion of all time when she won the platform-diving world championship in 1991 at the age of 12. She earned a gold at the 1992 Barcelona Games, when she was just 13 years old.

Fu dominated the diving arena throughout the 1990s with her stunning and extremely difficult dives. During the 2000 Olympics, Fu won her fourth gold. 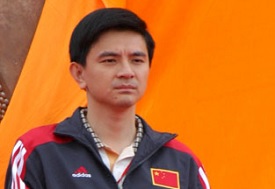 Xiong Ni is a diver from China. He won his first medal just at the age of 14 in 1988 Summer Olympics. In his journey in diving till now, he has bagged six gold medals, three silver medals and one bronze medal in various championships.

He has also won two golds in Summer Universiade. After winning 3-meter springboard in National Athletic meet in 2001, he announced his retirement.