Those who play Curling admire it as one of the most fascinating sports invented ever. The craziness of this sport can be seen much in the ice countries. It is often played by all age groups because the best thing about this sport is that it requires no strong physique; rather it requires only good strategy. But before moving to the playing strategies involved in Curling, let us have a look upon the equipment that we are going to require while playing this sport.

In addition to the above equipment, the list includes shoes, gloves, and protection equipment.

Curling needs a flat and smooth surface to provide good friction. The surface is a rectangular sheet having dimensions 45m×5m, as decided by the World Curling Federation. Due to the elongated shape, multiple matches can be played simultaneously by laying more than one surface.

A back line of 1.83m is drawn at the back of the house. It is parallel to tee line which is drawn bearing a length of 4.3-4.75 m. A line that passes exactly through the center of the sheet is known as center line. Target house is present at the intersection of this tee line and center line. Apart from the central circle, three other circles are also printed with different colors. 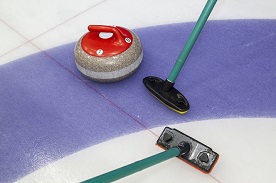 Nowadays, the curling brooms have the structure of a hollow tube which are made up with fiber glass or carbon fiber.

The reason of using hollow tubes is that they are lighter than wooden brooms and they provide a good downward force to the handle of the stone but some are accusing the modern brooms giving an unfair advantage to the players in the match.

It is nothing but a granite stone bearing a weight of 38-44 pounds with a maximum circumference of 36 inches. The height is maintained usually at 4.5 inches. All these standards are maintained under the guidance of world curling federation. 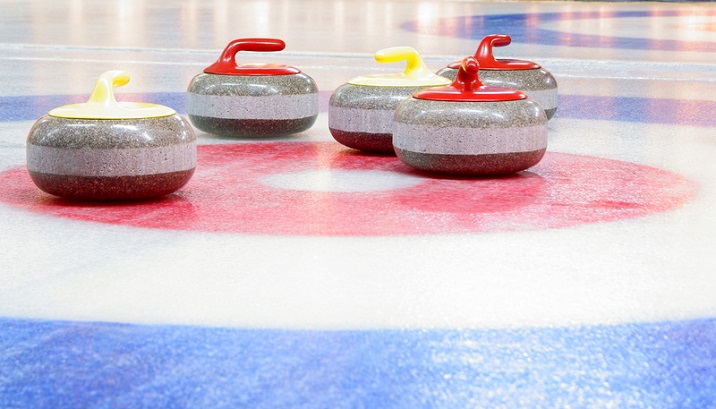 The lower part of the ring only comes in contact with the surface and it is called as running surface. The inner part of the ring is having a shape of concave and is hollow. The purpose is to clear the ice while sailing on the surface. From the figure above we can clearly see a handle attached to it. This is bolted at the center of the stone and is used for gripping purpose. 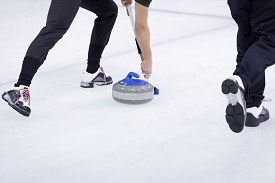 Curling shoes is different in the construction because of having dissimilar soles on both. One is known as slider shoe, whereas; other is known as gripper shoe.

Curling shoes also have a rubber coating to protect them from wear and tear while moving on rough ice surface.