Cricket is a team sport that is played outdoors. Cricket originated in England and gradually became popular across the globe. This sport requires complete physical fitness and athleticism to play. The sport is played between two teams of 11 players each. 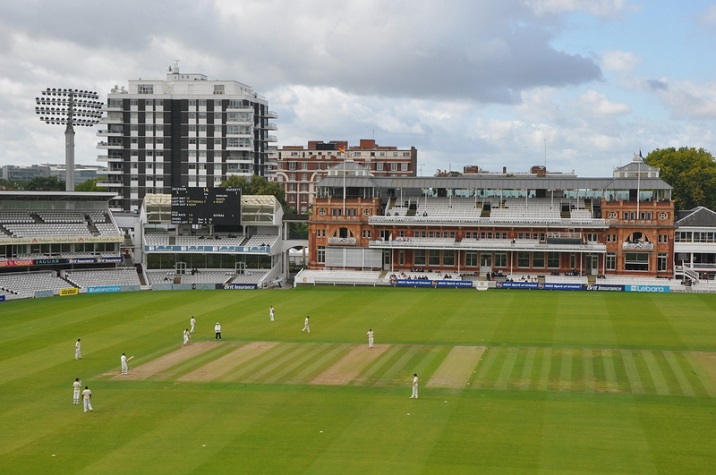 In cricket, each playing side has 11 players and one of them is appointed as captain. Apart from these 11 players, there are a few more players on each side who can only field as substitute for an injured team member. The fielding team should have 11 players and the opposition can send only two batsmen on the ground at the time of play.

A 15-member squad is a must for all international tournaments conducted by the cricket’s governing body, International Cricket Council (ICC).

Cricket as a sport began in England. The evidences available lead us to believe in south-east England in the beginning of 1900s. During those days, Australia, South Africa, and West Indies were the other countries where the sport was played. Gradually, the sport picked up popularity in the Asian continent as well. India, Pakistan, Sri Lanka, Bangladesh also started playing the sport.

In late 1900s, Asian countries like India, Sri Lanka, and Pakistan have made a mark in world cricket with each winning World Cup once. It led to the founding of Asian Cricket Conference in 1983 that took charge of developing the sport in rest of Asia. By 21st century, Bangladesh had become a new force in Asian cricket. Nepal, Malaysia, and Afghanistan also play competitive cricket now. Amongst these three nations, Afghanistan made headlines by qualifying for the World Cup in 2014.

The Asian Cricket Conference was renamed as Asian Cricket Council in 2003, headquartered in Kuala Lumpur. The council is subordinate to ICC and has an association of 25 countries.

England, Australia, West Indies, and South Africa started playing cricket from early 20th century. It was the brain of Abe Bailey, the then President of South Africa Cricket Association, to form an international council. Imperial Cricket Conference was formed in 1906 that was later renamed as International Cricket Council. Zimbabwe, Kenya, Ireland, Netherlands, Canada, Scotland, and UAE have all been part of international tournaments over two decades. United States also adopted the game since last few years. Currently, there are more than 100 countries playing this sport and associated with ICC.

Cricket is a team sport and is played on a big ground. The pitch in the center and ground is prepared for any format of the match. Later, stumps are rooted along the breadth of the pitch and players are called on to the ground to start the play. The team fielding will have 11 players guarding the boundary and two batsmen from opposition will come to bat. There will be two umpires on the field to monitor the match proceedings.

The sport is played on presumably a circular leveled ground with pitch as the center. The pitch is 24-yards in length and 4-yards in breadth. A rope is placed around the ground at a distance of 80 yards from the pitch. This rope is observed as boundary. The stumps are rooted at both ends with distance of 22-yards between them. Two carved small pieces of wood are placed on stumps, called bails. White parallel lines are drawn on both ends of stumps, called batting/bowling crease. It is 1.2 meters from stumps. Another set of parallel lines are drawn perpendicular to batting crease, called return crease. This is at a distance of half-meter from the length of pitch. 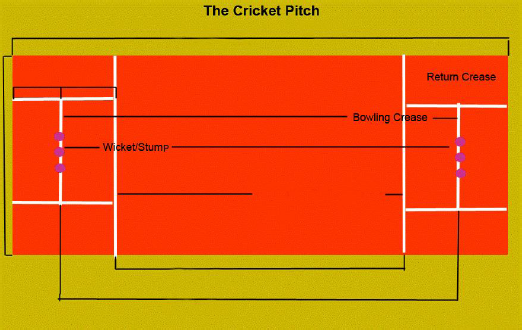 Rest of the equipment are all used to protect body parts, hence there aren’t any specific measures or design standards, with safety as priority.

As cricket is a game of bat and ball, the players are subjected to wear protective gear from not getting hurt. In this chapter, we will discuss about all the important gear and equipment that the players use while playing the game.

Bails − Bails are the smallest equipment placed on stumps. It helps in giving easy decisions by umpires to dismiss the batsman when the wicket is broken.

How to Play Cricket?

Cricket is a game that requires physical agility to bat, bowl, and field. Two teams of 11 players each play at one time. A set of rules were designed for the game by ICC. These are same for both men and women players. The game begins with captains of both teams and match referee gathering for toss. The toss winning captain is allowed to elect to bat/field first. This process is same across all formats. However, the dress code and fielding restrictions vary by format. It is mandatory for players to wear all white for a Test match, and colored tees and trousers for ODI and T20.

Umpires have a key role in the game as they monitor the proceedings. They decide whether the batsman is out, decide on no-ball, wide, and ensure both teams are playing according to the rules.

In this section, we will understand few laws of the game and how a cricket match is played. The cricket game begins with the on-field umpire’s signal “Let’s play!”

Let’s play! A Glimpse of the Game

In the golden era, cricket was played for days as each team almost played more than 100 overs a day. We can relate that to the current format of Test cricket. In the early days of cricket, an over involved eight legal deliveries. Gradually, new formats and rules came into existence and an over was reduced to six legal deliveries across all formats. We’re going to discuss the different formats of professional cricket in this chapter and few rules about them.

Test cricket is considered the format of highest level as it required both mental and physical strength to excel. All players wear white tees and trousers for this format. A red cricket ball is used to play. The earliest format of test cricket was played for six days with a day as reserve. The field restrictions are quite different compared to limited overs cricket.

Teams A and B have to play two innings each, if necessary. 90 overs are to be bowled every day. Team A batting first scores X runs. Team B gets to bat if team A declares their innings or is all-out. Team B should score X or more runs to stand a good chance of winning the match. Then, team A gets to bat for second time and set target for team B. Now, Team B has to achieve target in the time left and overs to be bowled.

In case team B gets all-out during the chase in second innings, team A is declared winner, else the match is drawn between the teams.

One-day international (ODI) is a limited over format of cricket. It was introduced in 1980s and 60 over a side were bowled. The dress code was same to that of test cricket. Over the years, this format also went through drastic changes in rules and it was reduced to 50 over a side and colored uniform. The red-ball was replaced with white-ball.

Team A batting first had to set a target for team B in 50 overs. Batting second, team B had to chase down the target in same number of overs. If they fail to do so, team A is declared as the winner irrespective of team A bowling out team B or not.

T20 is the latest and the most successful format of cricket. It has attracted lot of spectators to the ground and witness the match. Cricket became a widespread game in this format and new countries like United States, Malaysia, Canada, and Netherlands adapted to it swiftly. It originated in Caribbean islands, West Indies. Each team gets to play 20-over a side. Since it is the shortest format of the game, it is played under flood lights.

Batting first, team A sets a target for team B in 20 overs. Team B has to achieve the target in their stipulated number of overs while batting second.

Currently, there are 10 test playing nations that are eligible for all three formats. Rest of the countries have to play qualification rounds for entry into international events like ODI World Cup and T20 World Cup. The World Cup is conducted at senior and under-19 levels.

Test status is given to a national team depending on the performance at domestic level and global events. We will look at champions of different formats in the last chapter. Here is a list of all the global events organized recently by ICC and multiple nations participate for the ultimate trophy.

The venue for all the international events are finalized by ICC based on its facilities, playing area standards, and security measures.

All the cricket playing nations have their individual bodies that manage cricket events at the domestic level. The domestic level matches are also played as one-day and five-day games. The one-day games at domestic level are called List-A and five-day format is called First-class. Best players are picked from the domestic tournaments to represent country at the highest level. These national cricket boards also manage venues when another national team is touring their country. They are responsible for visiting player’s facilities and security.

The following table illustrates the domestic tournaments with respect to country and format.

Though cricket has its origins in England and are one of the best teams in the world, they have never been champions of the game. The winner of ODI World Cup finals is considered Champion of Champions. It is conducted once in four years. T20 World Cup is conducted yearly. The champion of Test cricket is decided based on the points in a calendar year. ICC has a ranking system for individual players that is similar to team rankings.

Cricket has its legacy with the way it is played across the globe and the members involved in the game. Players and umpires are key to popularize the sport over generations. Hence, the players with illustrious careers are regarded and admitted into the Hall of Fame category by ICC. Let’s take a brief look at these players and their stats.