The characteristics of the computer system are as follows − 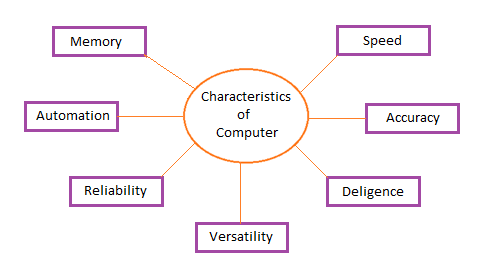 A computer works with much higher speed and accuracy compared to humans while performing mathematical calculations. Computers can process millions (1,000,000) of instructions per second. The time taken by computers for their operations is microseconds and nanoseconds.

Computers perform calculations with 100% accuracy. Errors may occur due to data inconsistency or inaccuracy.

A computer can perform millions of tasks or calculations with the same consistency and accuracy. It doesn’t feel any fatigue or lack of concentration. Its memory also makes it superior to that of human beings.

Versatility refers to the capability of a computer to perform different kinds of works with same accuracy and efficiency.

A computer is reliable as it gives consistent result for similar set of data i.e., if we give same set of input any number of times, we will get the same result.

Computer performs all the tasks automatically i.e. it performs tasks without manual intervention.

A computer has built-in memory called primary memory where it stores data. Secondary storage are removable devices such as CDs, pen drives, etc., which are also used to store data.