The concept of files in COBOL is different from that in C/C++. While learning the basics of 'File' in COBOL, the concepts of both languages should not be corelated. Simple text files cannot be used in COBOL, instead PS (Physical Sequential) and VSAM files are used. PS files will be discussed in this module. 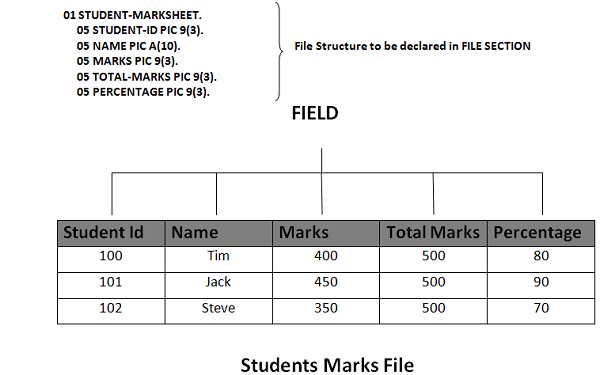 Field is used to indicate the data stored about an element. It represents a single element as shown in the above example such as student id, name, marks, total marks, and percentage. The number of characters in any field is known as field size, for example, student name can have 10 characters. Fields can have the following attributes −

Record is a collection of fields that is used to describe an entity. One or more fields together form a record. For example, in students marks file, student id, name, marks, total marks, and percentage form one record. The cumulative size of all the fields in a record is known as the record size. The records present in a file may be of fixed length or variable length.

Physical record is the information that exists on the external device. It is also known as a block.

Logical record is the information used by the program. In COBOL programs, only one record can be handled at any point of time and it is called as logical record.

File is a collection of related records. For example, the students marks file consists of records of all the students.