Learn in detail about Apache Kafka platform, which is used by giants such as Netflix and LinkedIn. A hands-on approach to build Kafka consumer applications using Java to reinforce your learning.

Getting Started with the Course

2 Lectures
Getting Started with Kafka

This course will walk you through the Kafka concepts step by step. We will explore the Kafka internals from a theoretical perspective followed by hands-on exploring the Kafka internals. Then we will learn about building the Kafka Producer to produce messages into Kafka using the producer API. This is followed by learning the different configurations that guarantee message delivery into Kafka and building Kafka Consumer to read messages from Kafka using the consumer API.

In the next section, we will learn about consumer groups and consumer rebalance, consumer offsets, and the different strategies that are available for the consumer to commit the offsets.

Next, we will learn about consumer rebalance listeners to perform some clean-up before partition revocation or some initialization tasks during partition assignment. Then learn about the different techniques from the consumer to seek a different offset.

And finally, we will code and learn how to build custom Serializer/Deserializer and integrate it into our Kafka Producer/Consumer.

By the end of the course, you will have a complete understanding of Apache Kafka and will be able to build Kafka Consumer applications using Java.

The complete code bundle for this course is available at https://github.com/PacktPublishing/Apache-Kafka-for-Beginners---Learn-Kafka-by-Hands-On 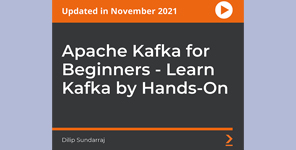