(i) absorption of food - Large Intestine 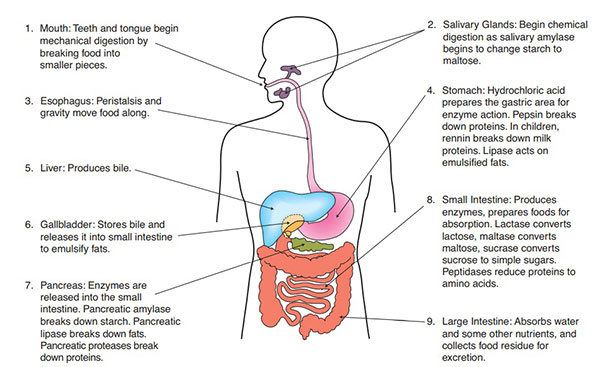 Digestion of Food in Humans:
1. Digestion begins when food enters the mouth (oral cavity). Teeth are used to grind and break up food. This is called physical or mechanical digestion.
2. An enzyme in saliva called amylase begins to break down into maltose sugar. This is called chemical digestion.
3. After it is swallowed, the chewed food moves down the esophagus. The esophagus acts as a connection between the mouth and the stomach.
4. The bolus (the chewed food coming from the mouth) then reaches the stomach, where mechanical and chemical digestion takes place further. The muscles in the stomach walls churn the bolus allowing it to mix with digestive enzymes and gastric acids like HCl. This process converts the bolus into a liquid called chyme.
The digestion in the stomach continues for several hours. During this process, an enzyme called pepsin breaks down most of the protein in the food. The chyme is slowly transported into the small intestine, where most chemical digestion takes place.
5. Liver produces bile juice which is stored in the gall bladder.
6. Bile juice is released from the gallbladder to help digest fats.
7. Enzymes from the pancreas and intestinal walls combine with the chyme.
8. Most of the nutrient absorption occurs in the small intestine. Nutrients are absorbed through its walls into the circulatory system and by the time the chyme exits the small intestine, only water, and indigestible substances are left behind.
9. The chyme then enters the large intestine, where water is removed and bacterias break down some indigestible materials, producing important compounds (such as vitamin K). The concentrated waste material that remains is called feces, which is passed into the rectum and eliminated from the body through the anus.