The Taj is constructed on the banks of River Yamuna and it is said that more than 22,000 workers were involved in the construction. Artisans and materials from all over India came for its construction. The Taj is a combination of Islamic, Persian, and Indian architecture. Other structures included in the Taj are garden, mosque, main gateway, and tomb. Taj Mahal is constructed in an area of 42 acres. The main building stands on a platform having a height of 50 meters. The four minars have the height of 137 feet each while the height of the tomb is 58 meters.

There is a mosque in the west and a naqqar khana or guest house in the east. The mosque and the guest house are made up of red sandstone. There is a garden covering the area of 580 meters by 300 meters. The construction of the garden is of Islamic style. It is wellwatered and green.

The main gateway of Taj Mahal is 30 meters high and its construction was completed in 1648. The topmost part of the gateway includes chhatris. The gateway is decorated with the verses of the Holy Quran. The door of the gateway is made up of silver with letters engraved on it. After entering the gateway, there is a courtyard. In Mughal period, during and after the reign of Shah Jahan, a huge amount of charity was given on the death anniversary of Mumtaz Mahal. The poor were also given food on that day.

There is a mosque on the west side of the Taj Mahal that faces the holy city of Mecca. Historians believe that the mosque was constructed by Isa Muhammad. There are two small arches on both sides of the mosque and a portal on its exterior known as Iwan. The three domes and four kiosks are coated with marble.

The interiors of the mosque are also well-designed as 569 prayer mats have been designed on the floor and the walls are engraved with the names of Allah and the verses of the Holy Quran. There is a mihrab in the mosque that tells the direction of Mecca. Along with it, there is a minbar from where a maulana delivers his speech. The minbar has three steps that leads to a flat platform on which the maulana sits and deliver the speech. There is a stone of the size of 19feet by 6.5 ft that denotes the temporary grave of Mumtaz Mahal. There is a pool in front of the mosque where the Muslims perform ablution before prayers. 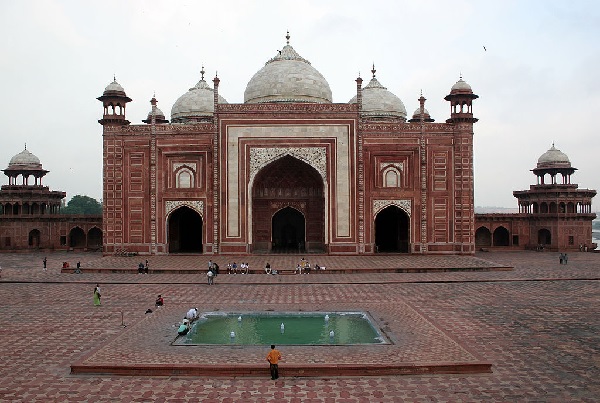 The floor of the mosque consists of 539 prayer carpets made up of black marble. Name of Allah and verses of the Holy Quran are also inscribed on the walls. There two towers, one is in north and other is in south.

The garden in which the Taj Mahal is situated has spiritual symbol as the greenery symbolizes paradise mentioned in the Holy Quran. People can reach the garden after the main entrance. The garden is spread in the area of 580 into 300 meters. The garden is divided into sixteen flower beds and is separated by water courses. 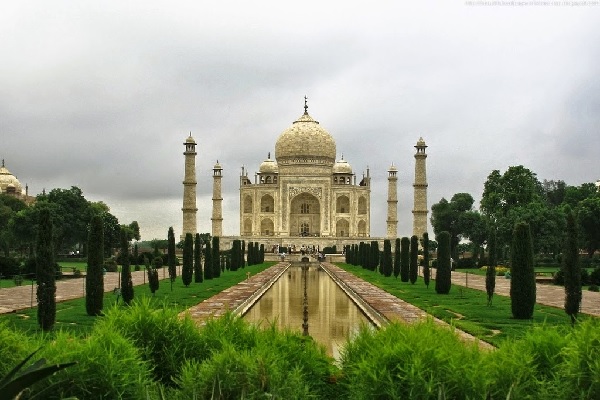 After crossing the garden, people reach the tomb which covers the area of 95 square meter. People can enter the tomb through a double staircase. There are four minarets each of 137 feet. They are made in such a way that they will not fall on the main tomb during a mishap or a natural calamity. One letter is engraved on each minar and on combining we get the name Ar-Rahman which is one of the many names of Allah.

There is a central chamber having four rooms below it for the graves of other family members. Aurangzeb replaced the original screen with octagonal screen which was made up of marble and precious stones.

The tomb of the Taj Mahal is one of the beauties of the monument. The dome has the circumference of 110 yards and height is 107 yards. The tomb is based on Islamic structure which symbolizes the unification of heaven and earth. The square on which the tomb stands symbolizes the universe. 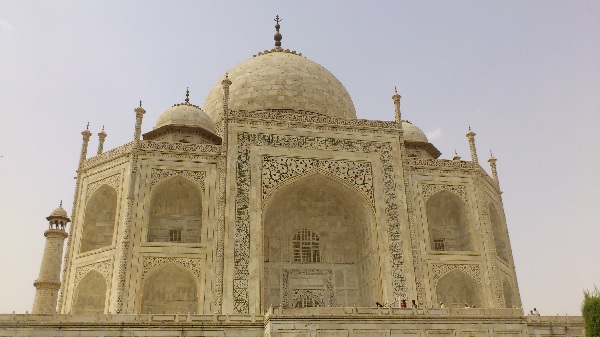 In total, the whole dome symbolizes the throne of Allah as it is supported by pillars at four corners which symbolizes the flow of grace. The tomb also includes the verses from the Holy Quran. The tomb is well-furnished with carpets, lamps, silver doors and others.