Uplatz provides this comprehensive training on DevOps covering four of the most important and popular elements constituting an integrated DevOps system. This DevOps course focuses on the detailed understanding and implementation of:

Maven is an automation and management tool developed by Apache Software Foundation. It is written in Java Language to build projects written in C#, Ruby, Scala, and other languages. It allows developers to create projects, dependency, and documentation using Project Object Model and plugins. It has a similar development process as ANT, but it is more advanced than ANT. Maven can also build any number of projects into desired output such as jar, war, metadata.

Maven is a powerful software project management and comprehension tool that is based on POM (Project Object Model). It is used for projects build, dependency and documentation. It simplifies the build process like ANT. But it is too much advanced than ANT. In summary, we can say that maven is a tool that can be used for building and managing any Java-based project. maven make the day-to-day work of Java developers easier and generally help with the comprehension of any Java-based project.

No matter how small or large, all applications must undergo a specific series of processes, such as generating and compiling source code. Developers can manually configure these processes, but it’s a time-consuming burden. To solve this issue, we use Apache Maven, which automates the entire process and makes Java developers’ daily work easier. 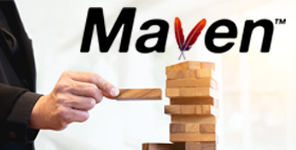