The tomb of Salim Chishti was built during the reign of Akbar between 1580 and 1581. It is a place where Sufi Saint Salim Chishti is buried. Akbar built it in order to respect the saint as the saint prayed for him for having a male son to become his heir.

The platform on which the tomb is constructed has the height of 1m. Tourists can enter the tomb through five steps. The tomb is surrounded by marble screens. The location of the tomb is in the center of the hall having semi-circular dome. 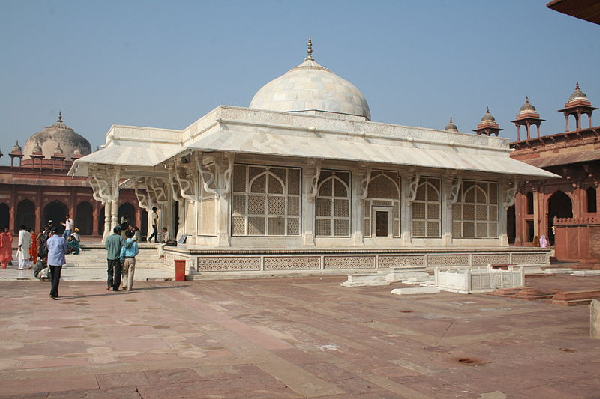 The platform is built by using black and yellow marble. A marble cenotaph is surrounded by chhaparkhat which is mostly covered by a green-colored cloth. The door of the main chamber has inscriptions from the Holy Quran. People come here to ask for blessings to fulfil their wishes.

The entrance of Zanana Rouza or the women’s tomb lies between Jamat Khana and tomb of Salim Chishti. The entrance is made up of marble and red sandstone. There is a central arch with a square opening and this arch consists of floral design. This tomb was connected by an underground pathway to Sheikh Salim Chishti house during his life time.