Jodha Bai Palace is also known as Raniwas and Zenani Dyodhi. The palace is massive and is double-storeyed. There is a rectangular block in the palace whose dimension is 231.8 × 215 feet. The gateway of the palace is situated on the east side and is very magnificent. The Hindu motifs used in the construction of the palace shows that the palace was built for a Hindu lady. 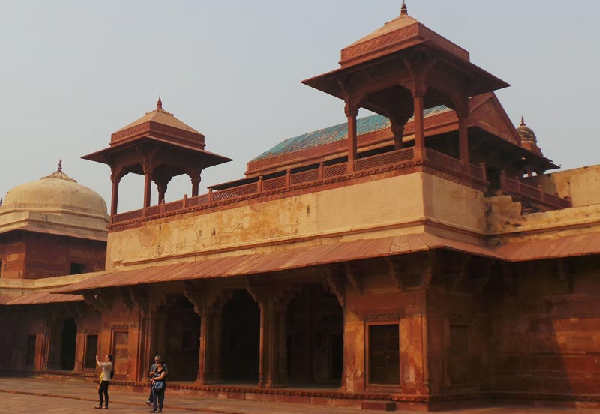 Many motifs can be found in the interior like swans, elephants, parrots, srivastsa mark etc. There is a suite in the palace which served as a temple. It contains vedikas and other Hindu motifs. The suite has pillars with brackets. The palace is built with red sandstone which also makes it very beautiful.

Panch Mahal was built by Akbar. The palace was near the harem of the women and is built in such a way that it provides relaxation during summer. Going from bottom to top each floor is smaller than the other. There are 84 pillars on the first floor. Each pillar had a jali from where women can view the happenings in the city. The second floor has 56, third has 20 and the fourth floor has 12 pillars. The topmost floor has a chhatri with a copula 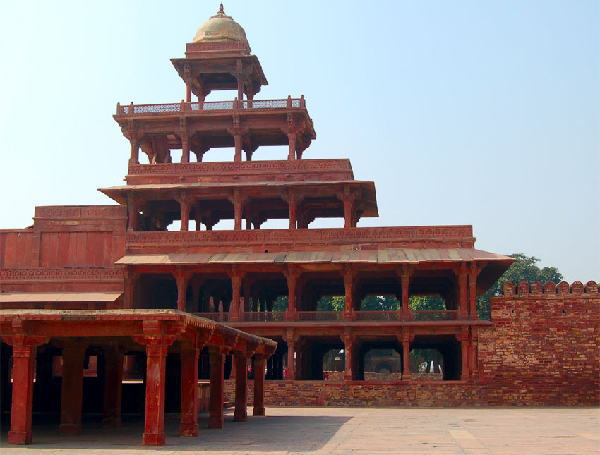 Birbal was a very close friend, one of the nine gems, and the prime minister of Akbar’s empire. So emperor Akbar thought of making a palace for him. Though the palace was used by the queens Ruqaiyya Begum and Salima Begum. The palace was built on the basis of Mughal and Persian architecture and is of two storeys.

There are four rooms on the ground floor each having the dimensions of 16.10 feet. The rooms are interconnected by two doors one at the southwest and other at the northwest. The interior design of the palace is also beautiful.

Khas Mahal was the palace of Mughal Emperor Akbar. The ground floor has two rooms and first floor has khwabgah. One of the rooms at the ground floor was used as a dining hall and the other was used as a library. There is a jharokha from where Akbar used to contact with general public. Khwabgah was connected to ladies harem and was covered by jaalis.