Mughal Emperor Akbar founded the city in 1569 and made it his capital from 1571 to 1585. The construction of the city took around 15 years where courts, palaces, mosques and other structures were built. Previously, it was named Fatehabad where fateh means victory. Later the name was changed to Fatehpur Sikri. Nine gems from his courtiers were selected here. 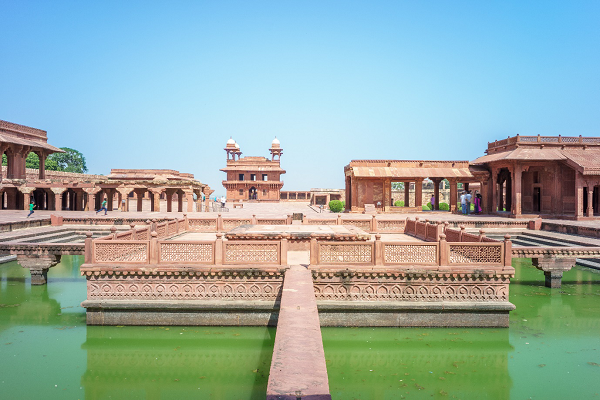 Fatehpur Sikri is opened for people from 6:00am to 7:30pm and it takes around one hour to visit the city. It is opened on all days even on public holidays. Tourists can also visit a museum near Diwan-i-Aam booking counter. The museum is opened from 9:00am to 5:00pm.

In order to visit the city, tourists have to buy tickets which can be collected from the ticket counter. The price of ticket for Indian visitors, visitors from SAARC and BIMSTEC countries have to pay Rs. 40 in which Rs. 30 are charged by AIS and Rs. 10 by ADA. There is no entry fees for the children up to 15 years.

Foreign tourists, who do not belong to SAARC or BIMSTEC, have to pay Rs. 510 in which Rs. 500 is charged by ASI and Rs. 10 by ADA. On Friday, no ADA toll tax is levied. If a foreign tourist buys ADA toll tax ticket for Taj Mahal, he need not have to pay the toll tax for Agra Fort, Fatehpur Sikri, Akbar’s Tomb, and Itmadud-Daulah tomb but they have to visit all these places in one day. If the miss then they will again have to buy the toll tax ticket.

Tourists who need accommodation can stay in hotels in or nearby the city. Bharatpur, Agra, and Mathura are the nearby places where people can stay and can go to Fatehpur Sikri through road or rail transport. The hotels in Agra and Mathura can be categorized from inexpensive budget hotels to expensive 5-star hotels.

Fatehpur Sikri can be visited between February and April and between July and November as the climate is very pleasant. In the rest of the months, the climate is either very hot or very cold which can cause discomfort to the visitors.