Cave 1 is a monastery having a hall with 14 cells. The hall also have sanctuary and a verandah whose dimension is 10.5 x 2.82 x 4.1m. There is a courtyard with two cells, one on each side. There is a statue of Buddha that is seated in the mudra of dharma chakra parivartana 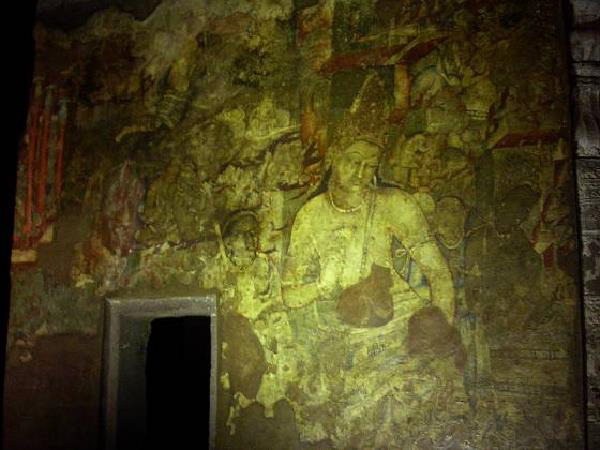 Cave 2 has the dimensions of 35.7 x 21.6. The cave includes cells, sanctuary, and subshrines. There is a statue of Buddha who is seated in the mudra of dharma chakra parivartan. Each sub-shrine has a painting of Yaksha known as Sankhanidhi and Padmanidhi. Along with it, the figures of Panchika and Hariti can also be found. The ceiling is painted with Jataka tales. 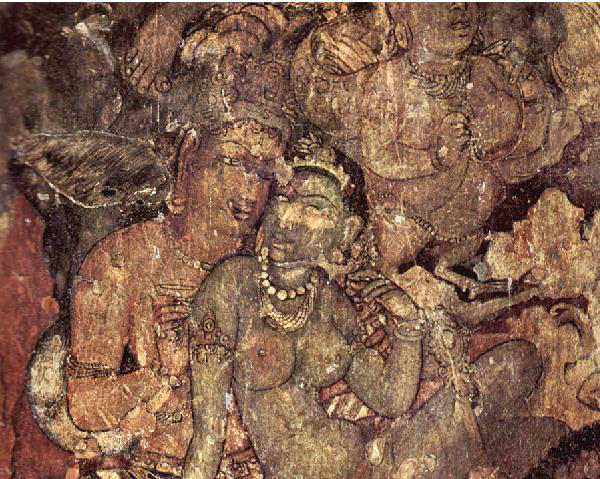 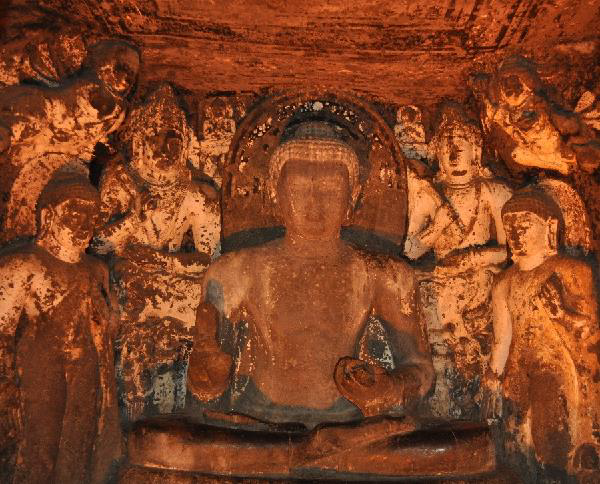 Cave 6 is a monastery having double storey and has the dimension of 16.85 x 18.07m. A sanctuary and a hall can be found on the first floor. The second floor has a hall with cells, sub-cells and sanctuary. 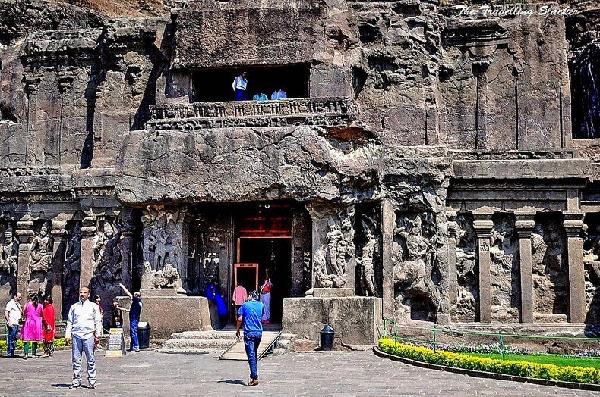 Along with these, there is a statue of Buddha installed in both sanctuaries. The statue shows that Buddha is teaching his disciples and followers. Paintings of Sravasti and Mara’s Temptation can also be found here.

Cave 7 has the dimensions of 15.55 x 31.25m. The cave has a sanctuary along with a hall with two small verandahs. The ceiling of the hall is supported by pillars having octagonal shape and has eight cells. The sanctuary has a statue of Buddha preaching to his disciples. Paintings of Buddha under the presence and protection of Nagamuchanda is also there.

Cave 8 has the dimensions of 15.24 x 24.64m. It is an incomplete monastery and is considered as one of the earliest caves. Some portions of the cave were ruined due to a landslide.

Cave 9 is a chaitya griha having the dimensions of 18.24 x 8.04m and belongs to Hinayana sect of Buddhism. The cave has a door with two side windows, and a central hall. The aisles in the hall are separated by 23 pillars. The hall also has a stupa for worshipping. 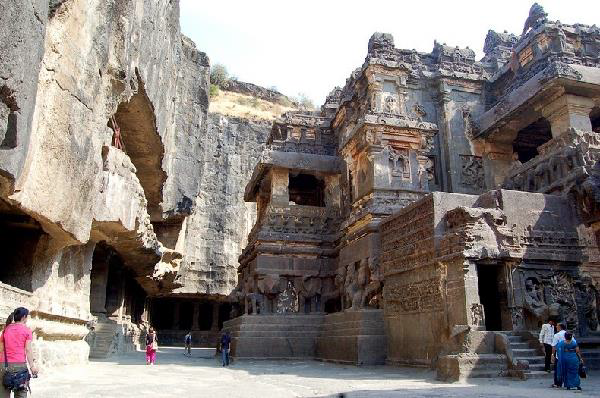 Cave 10 has the dimensions of 30.5 x 12.2m having two aisles on each side which are divided by 39 octagonal pillars. There is also a stupa where the followers used to worship. The paintings in the caves depict the stories of Sama Jataka and Chhaddanta Jataka. One of the paintings belong to 2nd century BC while the other belongs to 4th to 8th century.

Cave 12 is a Hinayana monastery having the dimensions of 14.9 x 17.82m. The hall has twelve cells arranged on its side. The first wall of the hall has collapsed. An inscription on the wall tells that a merchant named Ghanamadada gifted this cave during the period of 2nd century BC to 1st century BC.

Cave 13 is a Hinayana monastery having a collapsed façade and a square hall. Rock-cut beds can be found in the three cells. These cells are located on each side of the hall. Cave 13 is one of the earliest caves that was found during excavation.

Cave 14 can be found above cave 13 and is a monastery whose dimensions is 13.43 x 19.28m. It is an early Mahayana Vihara which has sala bhanjikas on the corners of the doorway.

Cave 15 is a monastery that belongs to Hinayana sect of Buddhism and was built in 5th century AD. The dimensions of the cave is 19.62 x 15.98m. The cave has a verandah, a hall and a shrine having many images of Buddha.

Cave 15A is the smallest cave in Ajanta. It has a central hall with three cells, one on each side. There was an inscription on the front wall. The chaitya window in the hall is built according to vedica pattern.

Cave 16 is a monastery of Mahayana sect of Buddhism. There is a painting in which it is shown that Princess Sundari is very happy when she came to know that her husband, Nanda, is going to become a monk. Nanda was the half-brother of Buddha.

Cave 17 is a monastery that belongs to Mahayana sect. The caves has many paintings on the doors, walls, and ceiling. The ceiling has the paintings of musicians and maidens while paintings of Buddha, lotus petals, goddesses and other paintings were made on the door.

One painting shows King Simhala fighting with ogresses who ate humans. Another painting shows the flying gods with their apsaras. There are seven statues of Buddha seating with the future Buddha. Each statue is seated under a Bodhi tree.

Cave 18 is rectangular in shape having the dimensions of 3.88 x 11.66m. The hall has two pillars having moulded bases and octagonal shaft. Cave 19 is a chaitya griha whose dimensions is 16.05 x 7.09m. 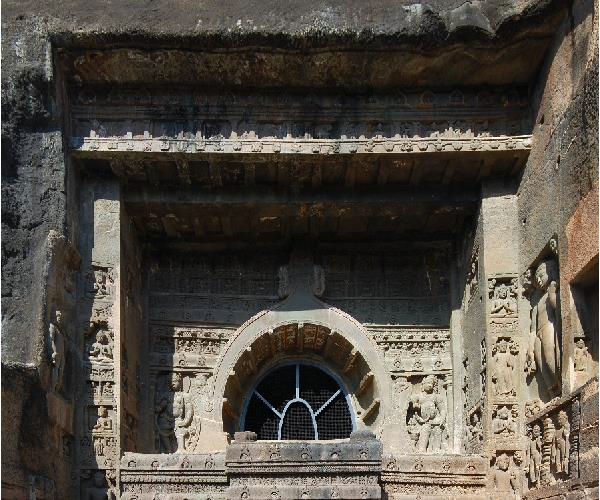 The stupa in the cave has a large statue of Buddha. There are two images of Yakshas that and each lies on either side of the arch. The walls in the hall are painted with the images of Buddha sitting in different postures.

Cave 20 is a monastery that belongs to Hinayana sect of Buddhism. The verandah of the cave has carved columns and bracket figures. There is a hall in the cave having no columns. People can go to the shrine through an antechamber attached to the hall. The antechamber has two chambers one on each side.

Cave 21 is a monastery whose dimensions is 28.56 x 28.3m. There is a hall with twelve cells out of which four cells have pillared porches. Another feature in the hall is the twelve pillars. Along with this, the cave has sanctuary and a pillared verandah. The sanctuary has a statue of Buddha which depicts that he is preaching to his disciples.

Cave 22 is located on the left side of cave 21. The cave is a vihara having a collapsed verandah and a hall. The hall has two incomplete cells on left and right side. A Buddha figure can be found inside the shrine.

Cave 23 is a monastery having the dimensions of 28.32 x 22.52m. The monastery has a hall with cells on its sides. Other structures found in the cave are a sanctuary, antechambers and a verandah. 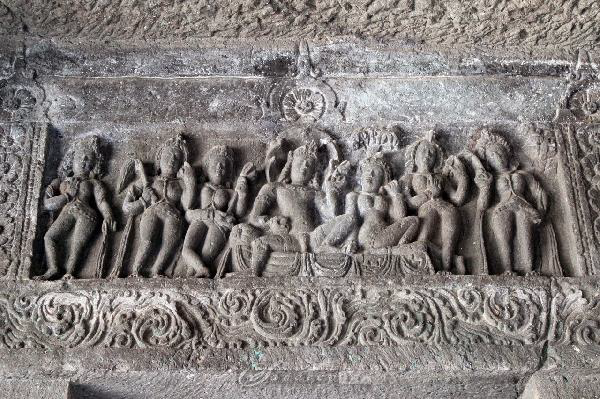 The construction of the cave could not be finished but still the pillars inside are welldecorated. The cave also has images of naga depicted as doorkeepers. Along with this, pilasters or rectangular columns can also be found in the cave.

Cave 24 is a monastery having the dimensions of 29.3 x 29.3m. The cave has a hall with a pillared verandah and a sanctuary. There is a chapel outside the verandah which is also pillared. There is a statue of Buddha having the posture of pralamba-padasana.

Cave 25 is a monastery having the dimensions of 11.37 x 12.24m. The cave has a courtyard, a hall, and a pillared verandah. There are two cells on the left of the verandah but no cells are there in the hall. Another feature of the cave is that there is no shrine in the cave.

Cave 27 has two storeys out of which one is partially collapsed. The cave is a monastery having a hall with four cells. Other structures in the cave are a sanctuary and an antechamber. There is a statue of Buddha in the sanctuary. The statue depicts that Buddha is teaching his disciples.

Cave 28 is a monastery and has only a pillared verandah. Nothing much is excavated in this cave and also it is not fully constructed. Cave 29 is a chaitya griha having the dimensions of 22.8 x 12.84m. The cave is located between cave 20 and cave 21.