Ajanta Caves were built from the Basalt accumulated in the form of igneous rocks. These rocks were accumulated due to the volcanic eruptions occurred long back. The workers carved the rock with proper planning as cracks also occurred during the process.

The workers carved pillars, roofs, and idols out of the rocks. Along with this, painting work was also done. Tourists can enter the site through a gateway built between cave 15 and cave 16. The gateway is decorated with elephant and snake.

Most of the caves are in the form of Viharas having dormitories attached to them. At the back side of the caves, a sanctuary was built and each sanctuary has a statue of Lord Buddha in the center. Many other deities are also carved on the pillars and near the large statue of Buddha. 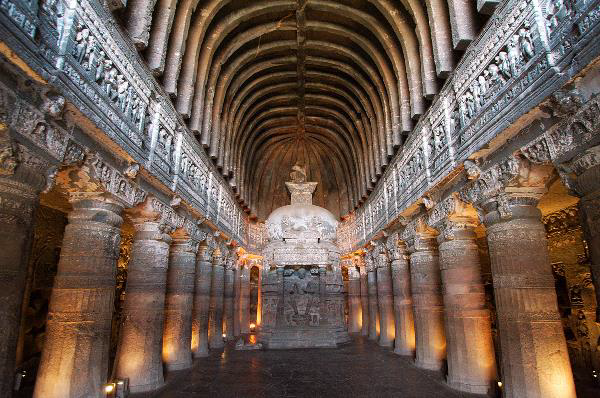 These caves were built during the second phase and were shifted from Hinayana sect to Mahayana sect. Due to all these features, they came to be known as monasteries. The center of the viharas are in the form of a square having rectangular aisles on each side. There are number of small cells which can be entered through the doors made up of wood.

The worship halls, also known as Chaitya Grihas, was built in the form a rectangle. The halls are divided into a naïve and two aisles. The hall consists of a stupa and an aspe. A stupa is a hemispherical structure having the remains of Buddhist monks and nuns while apse is a semi-circular structure having a vault or semi-dome. 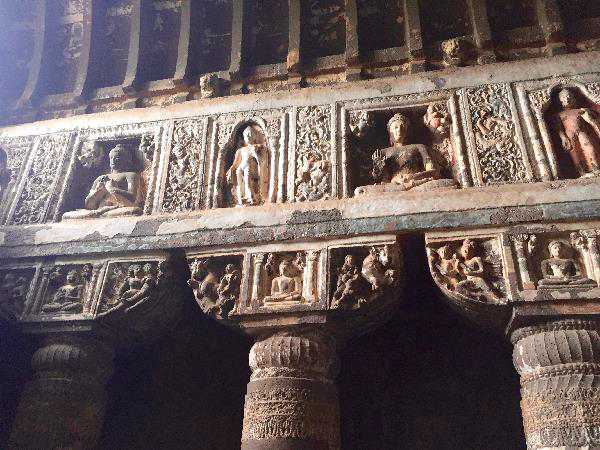 People performed circumambulation around the stupa which is surrounded by pillars. Some caves have large entrances having windows through which light entered the caves. The construction of the worship halls depicted the architecture of Christian church but they didn’t have any chapel.