Many palaces were built by the kings of Lodi and Mughal dynasty. Most of them have been ruined and few are left. The description of some of them is as follows −

Sheesh Mahal or glass palace was built in 1631 by Shah Jahan below Diwan-e-Khas. The palace is extra thick walled as it is said that it was used for taking baths. Mirrors have been fixed on the walls which enhances the beauty of the palace. As many numbers of mirrors have been placed in the walls and ceiling, the palace is called Sheesh mahal. The artificial lights inside the palace were used to illuminate it.

There are two chambers in the palace which have two passages. The chambers are connected with a broad arch that is placed in the center. Each chamber has a marble tank and has fountains for taking bath. The doors of the chambers are also built with marble in order to take steam bath. There are two inlets for water and two niches for lightening the candles.

Akbari mahal is ruined now but legends say that it was a big palace built between 1565 and 1569. The palace was built between Jahangiri Mahal and Musamman Burj. It had a large courtyard and many rooms for accommodation were built around it. Some rooms can still be seen and tourists can enter them through the gate which was designed in such a way that women can be completely veiled and secured.

There were two halls in the palace out of which one hall has three openings towards the river. The palace has Bengali Burj having a large hall with a dome. Near the burj, there is Akbari Baoli to provide water to the rooms surrounding it. The palace was built with red sandstone with flat ceilings and brackets.

Jahangiri Mahal was built between 1565 and 1569 AD. The arched portal of the palace has two windows along with towers on both sides. The palace includes rooms, corridors, verandas and many other structures which surrounded a courtyard. The entrance hall had tibara dalans and side rooms. It is said that the Rajput wives of Akbar lived in the palace. After that, the palace was used by Nur Jahan, the wife of Jahangir. 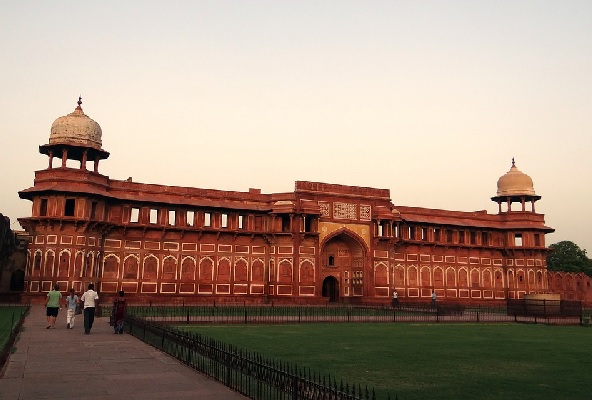 The palace also had a Peacock Hall or Mayura Mandapa which was a red sandstone apartment. The peacock hall had a courtyard and brackets each having a peacock with a serpent in its beak. The building includes chhajjas, brackets, and screens which enhances the beauty of the building.

Jahangirā€™s Hauz was constructed by Jahangir in 1610. The height of the tank is 5 feet while the diameter is 8 feet. The circumference pf the rim is 25 feet. The tank was movable and so it could be used inside the palace and during the camping period. There is a Persian inscription which tells that the tank was built in 1610 by Jahangir.

Shah Jahan built the Khas Mahal between 1631 and 1640. It is also known as Aramgah-i-Muqaddar and was built between the Yamuna River and the Anguri Bagh. The pavilions of the palace were made up of white marbles. 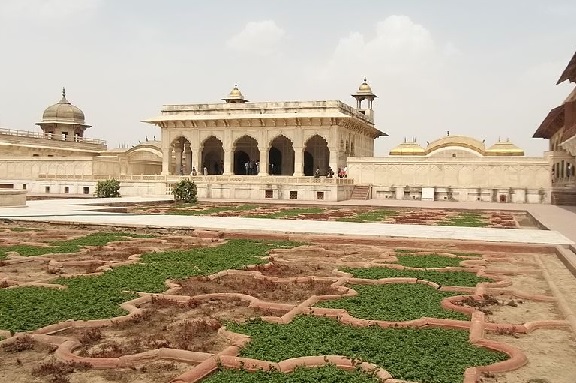 Along with this, there is a tank in front of the palace which had fountains. The main hall of the palace, called baradari, was connected to the living rooms. The ceilings were beautifully carved while the walls had the pictures of the Mughal emperors. 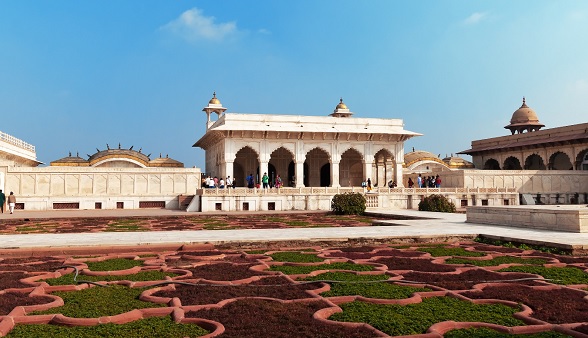 Bengali Mahal was built by Akbar having curved chhajas or Banglauar chhajjas. Two-storeyed underground apartments can be found under the table. On the northern side of this palace, Shah Jahan made other palaces which divided the Bengali palace in two parts called Akbari Mahal and Jahangiri Mahal.

Shah Jahani Mahal is situated between Jahangiri Mahal and Khas Mahal. The palace consists of a large hall surrounded by living rooms. The palace was built with red sandstone plastered with a thick white plaster. The walls are painted with a colourful design of flowers. There is a marble dalan with five arches that are cusped. The double pillars support the arches which are externally protected by a chhajja.

Musamman Burj, also known as Saman Burj and Shah Burj, is a tower in octagon shape. The structure was built near Diwan-e-Khas and it was built by Shah Jahan. During the reign of Akbar, he built a palace which was demolished by Jahangir to build other buildings. Then Shah Jahan chose this place to build Musamman Burj for his beloved wife Mumtaz Mahal. The building was built between 1631 and 1640. 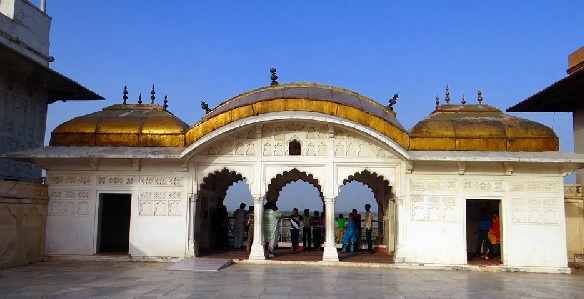 The dome of the building is crowned with copper while the floor resembled the board of a game called pachchisi though nobody played the game here. It was made only to cover the drains. There is a beautiful window or jharokha made up of marble. Along with it a chhajja was there on the support of brackets.