There are four gates to enter the fort which are located on four sides.

Khizri gate, also known as water gate, is in front of the river. The gate has a drawbridge over the moat. On both sides of the gate, there are octagonal towers one on each side. The gate also has Naubat Khana which has pillared pavilions around it. The bastions on the gate are topped with chhatris along with inverted lotus.

Akbar built the Delhi Gate between 1568 and 1569. Delhi Gate is on the western side and is the most sophisticated in comparison to other gates. This was the main entrance during the time of Akbar so for the security purpose, a draw bridge was made to cross the moat. The draw bridge can turn to 90 degree between outer and inner gates. There were sharp curves at the entrance to prevent invasions. 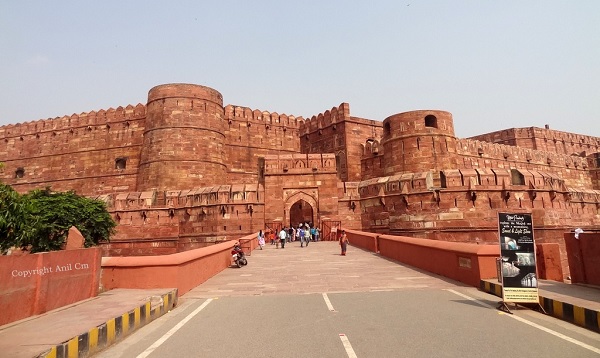 Hathi Pol is the inner gateway having one stone elephant on each side for security. The fort has double ramparts with circular bastions which are placed at regular intervals. Besides these trap points, ramps were also made for preventing invasion. The bastions of the gate are also very high. 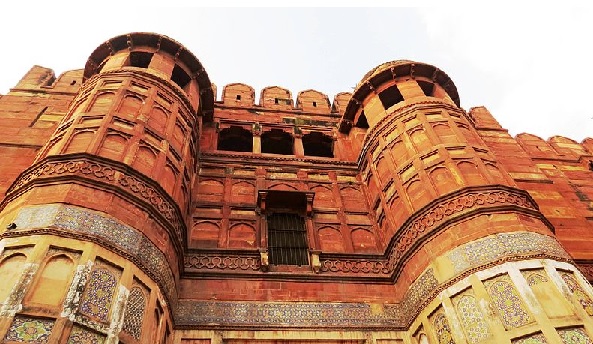 Ghazni Gate belonged to the tomb of Mahmud Ghaznavi. The tomb stands at Ghazni which was brought by the British in 1842. At that time the governor general was Ellenborough who said that this gate belonged to Somnath temple as it was constructed with sandalwood. But it was a false claim made by the governor to win the hearts of Indian people.

There was no resemblance of Indian architecture in the gate. An Arabic script on top of the gate also proves that the gate does not belong to Somnath. The dimensions of the gate is 16.5 by 13.5 feet and weight is around half a ton. It was not brought to Somnath temple and also it has no relationship with Mughal architecture.