Many congenital conditions can occur at birth. Some of them are common, while some are extremely rare. The rare conditions are also very tricky because doctors have not found any cure for many of them. It can be very difficult for the families and caretakers of a person with a rare condition, and this is because they feel confused and lost about how they can deal with the condition and help the suffering person. There is one such rare condition. This condition is on a congenital spectrum and has very dangerous effects on a person's life. It is called the Zellweger spectrum.

What is Zellweger syndrome?

This is a hereditary condition that is transferred from parents to offspring. Soon after birth, it disrupts cellular activity and leads to significant issues. A newborn may struggle to eat or move around and have brain, liver, and kidney issues. There is neither a remedy nor a cure; the sickness typically kills infants before they reach their first birthday. This is a multisystem disorder that affects many different parts of the body.

How does Zellweger syndrome occur?

In this metabolic disorder, the organelles called peroxisomes are affected, and these organelles are present in all body parts. An important function of peroxisomes organelle metabolic activity, Zellweger disease can negatively influence the body.

What is the Zellweger Spectrum?

The following is a list of disorders that are part of the Zellweger spectrum disorder. 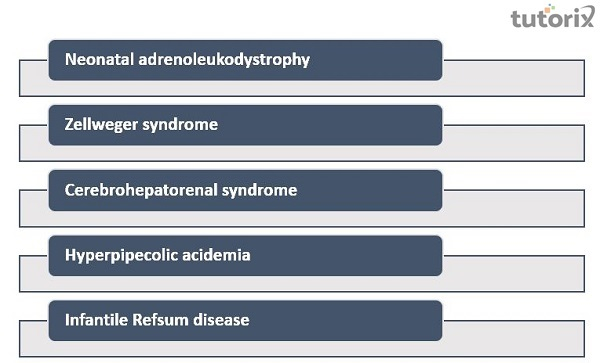 Zellweger is the most severe in its impact among all the other disorders in the spectrum. Many of the disorders mentioned above are similar.

What are the symptoms of the Zellweger Spectrum?

This condition affects many parts of the body, and it can affect anyone, regardless of gender. When both parents pass a mutated gene that causes this condition, the child gets this condition. Here is a list of common symptoms.

Other symptoms that are commonly observed include −

How is this condition diagnosed?

Physical features of the infant, such as a different shape of the head or the face, are an indication of this condition. In this condition, very-long-chain-fatty acids (VLCFA) buildup in the system, and a test for the same by the name of VLCFA can help detect this condition and confirm a diagnosis. This test is a specialized biochemical test, and along with this highly sophisticated genetic testing, it assists in arriving at a diagnosis. This condition can be diagnosed through blood and urine tests, too. High levels of substances such as fat molecules in the blood or urine indicate this disorder. Blood tests can also confirm the mutation in PEX genes.

So far, there is no cure for Zellweger syndrome. Unfortunately, babies diagnosed with this syndrome often do not live long enough. The treatment modalities only focus on easing the symptoms. For instance, feeding assistance via feeding tubes is provided to children with this condition. There are no treatments available that address the cause of Zellweger syndrome. Genetic counseling is by far the best way to prevent this condition.

Zellweger is a multisystem congenital condition that is most often found at birth. When babies have this, they display facial features that are dysmorphic. This involves a large forehead and fontanels. They can have abnormal ears, hypotonia, and a weak body. The eyebrow ridges are abnormal. They can have defects in several systems of the body. The kidneys, heart, and digestive systems are abnormal. Zellweger syndrome is the most severe of the other disorders in the Zellweger spectrum. There is no cure for this condition. So far, genetic testing and counselling are the most effective prevention methods. Doctors can counsel them during family planning if both parents have a defect that can lead to Zellweger syndrome.