A Chinese startup company namely called Ehang has unveiled the first passenger drone that can carry one person for about 20 minutes. The Guardian has a meaningful remark for it: “The cabin fits one person and a small backpack and is fitted with air conditioning and a reading light. It is designed to fit, with propellers folded, in a single parking spot.” The drone will be priced at a range of $200,000 to $300,000 (£140,000 to £200,000) and will be available later this year. 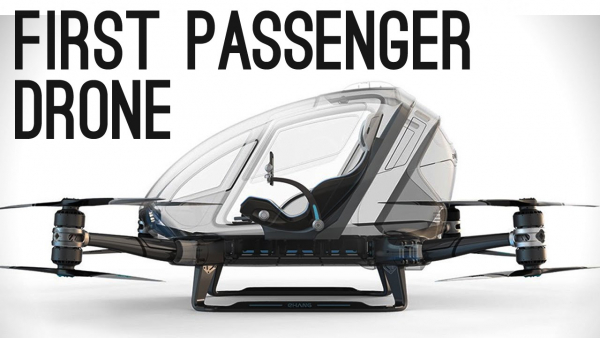 The drone is named Ehang 184 Autonomous Aerial Vehicle (AAV). It weighs nearly 200 kilograms (440lbs), and flies using four sets of paired electric motors. The company says that the batteries can be charged in just two to four hours for a full recharge. A tablet, which is used to set the flight path before take-off, controls the drone.

According to the company’s website: “Ehang 184 AAV flies in a inverted U shape. It takes off and lands vertically, point to point direct flight based on altitude and latitude of the origin and termination point. Take Off/Landing points are landing targets pre-set with Ehang Logo. The landing camera will position the landing targets automatically and accurately.”

The passenger of the drone, however, has no inflight control, so safety is a big concern. The company claims: “Even with one propeller malfunctions, it can still land in the nearest possible area safely.” In addition, if any other components malfunction or disconnect, “the aircraft will immediately land in the nearest possible area to ensure safety.”

According to The Guardian, the company is also planning to set up a remote control centre that would take over the charge of controlling the machine if there were a problem. In lab tests, the vehicle has flown for more than 100 times at low altitudes in a considerably forested area in Guangzhou, several times with a person in it.

Ehang was started in 2014, and it has already raised over $50 million (£34 million) in capital from investors. The company has created some popular products such as the Ghostdrone product. The Ehang 184 is a natural and more commercially-inspired extension of the company’s activities beyond the smaller, compact and traditional drones.

The company’s website also reveals that the single-seat Ehang 184 is capable of flying for 23 minutes at an average speed of 60mph. It needs at least two hours for a single charge of its batteries between trips.

The maximum cruising altitude is in the range of 1,000 and 1,650 feet. However, the drone can reach a maximum height of 11,500 feet; which is about one-third of a typical commercial airliner’s altitude.

The passionate-players’ six-figure dream machine buys an equipment list that includes… air conditioner and a reading light. Just like a commercial airliner seat, then, however, it doesn’t compare quite naturally with a £8,000 supermini’s kit list.

There are some drawbacks as well. The drone is capable of carrying 100kg of cargo, so if you are heavy, the quantity of luggage you can bring will be limited.

The ‘controls’ are not quite detailed too. After setting a point-to-point route on the on-board tablet device, the passenger can only ‘take-off’ and ‘land’. So, the mid-air story is not quite sure in the case of this super mini-drone.

There is quite a lack of hardware and basic electronic inputs. The problem is that in the event of an emergency, the rider’s safety will entirely depend on drone’s automated systems. It is surely a big concern to potential customers. Then there are few regulatory authorities who will assess the usability and safety standards.

Ehang’s invention surely breaks new ground in personal aviation. However, it will take some time to see whether the device really enjoys the respect it wants to acclaim.

Another One from Drone Operators

Meanwhile, a Jetstream aircraft had the first to fly ‘unmanned’ across UK shared airspace in 2013. The pioneering flight which was controlled by a pilot on the ground, started from Warton, near Preston in Lancashire, and landed in Inverness. It was described as ‘a new chapter in aviation history,’ which can pave the way for passenger planes controlled from the ground by ‘drone’ operators.

The system works using a series of cameras in the cockpit and underneath the plane to beam high definition images to operators on the ground.

The sensors also capture the key information for the aircraft and the atmosphere around it, giving the operators exactly the same data they would have if they were sat in the cockpit.

The system will now undergo a rigorous series of tests of its safety system, to ensure it can avoid bad weather, sense and avoid nearby planes and make emergency landings without assistance.

Ehang is surely paving the path in personal aviation to a new limit. The drone may be quite at a nascent stage and more perfection would follow, but once and for long, Ehang will stay the ground-breaker in personal flying-drones history. This is a big reputation for the startup and it understands the responsibility it has in future.

At a time when the world is debating about the use of unmanned drones, it is not quite sure how a drone that carries passengers inside will be received. For self-driving cars, which are gaining wider acceptance, autonomous flying vehicles are far more susceptible to errors. Hence, the criticism is in a way good for the company itself.

There is no surety whether this passenger drone will create a dent in personal aviation history. Moreover, it is also not obvious who might want to buy and use such a passenger drone. The price range is too high and the returns offered by the device are too limited. However, a new chapter has really begin and it won’t be too late until we see a perfect option that can really change our commuting habits altogether.

Till then, we must thank Ehang for carving out a niche.