Why is a black cat crossing your path while going out consider as a bad sign?

Black cats have been popular in folklore. How different myths treat them, varies from culture to culture. What is the origin of such a superstition that a black cat is a bad omen and if it happens to cross your path, you are going to having a bad day?

Western myths look upon black cats as the bearers of bad will and as symbols of evil omens. Black cats are often taken as the equivalent of evil witches practicing malicious black magic. This again originates from the belief that witches were shapeshifters and that they often assumed the shape of black cats to suit their evil purposes.

Moreover, the black cat in folklore is popularly believed to be changing forms to human shapes to serve as spies of evil witches and demons. It is also found in the Bible. Following such biblical notions, pilgrims carrying black cats with them would be severely punished or even killed in early days in Plymouth.

The black cats were viewed not only as mysterious but also demonic. This belief led people to kill all the black cats. They were burned up in large-scale massacres known as mid-summer bonfires for being considered Satanic. In most parts of Europe it is believed that if a black cat crosses one’s path, it leads to that person’s death or misfortune. 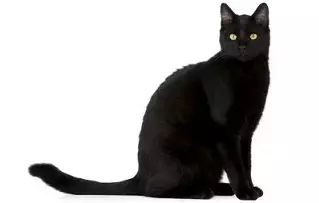 In Germany, the same superstition narrows to the fact that a black cat has to cross one's path from right to left to be considered an unlucky sign. On the other hand, 18th-century pirates considered that black cats stood for different types of luck. A black cat walking towards someone would mean bad luck, and one walking away from him would mean good luck.

They Signify Good Omens Too

Interestingly, UK holds exactly the opposite view of this superstition among the pirates. However, tracing the origin of this particular superstition creates a lot of confusion. This is because, in some parts of UK, black cats have been considered good omens and bearers of good fortune as well.