What is Vestigial side band modulation? Why is it used?

Among the modulation systems in the communication field, the DSBSC and SSB are the mostly used once till the VSB was invented. If the carrier is suppressed and the power saved is distributed to the two sidebands, such a process is called as Double Side Band Suppressed Carrier system, or simply DSBSC.

The process of suppressing one of the sidebands, along with the carrier and transmitting a single sideband is called as Single Side Band Suppressed Carrier system, or simply SSBSC or SSB. In the case of Single Sideband modulation, when a sideband is passed through the filters, the bandpass filter may not work perfectly in practice. As a result of which, some of the information may get lost. But in DSBSC two of the sidebands that are transmitted carry the same information, which is a waste.

Hence to avoid this loss, a technique is chosen, which is a comprise between Double Sideband single carrier modulation and Single Sideband modulation, called Vestigial Sideband technique. The word vestige which means “apart” from which the name is derived.

Vestigial Sideband Modulation or VSB Modulation is the process where a part of the signal called as vestige is modulated, along with one sideband. 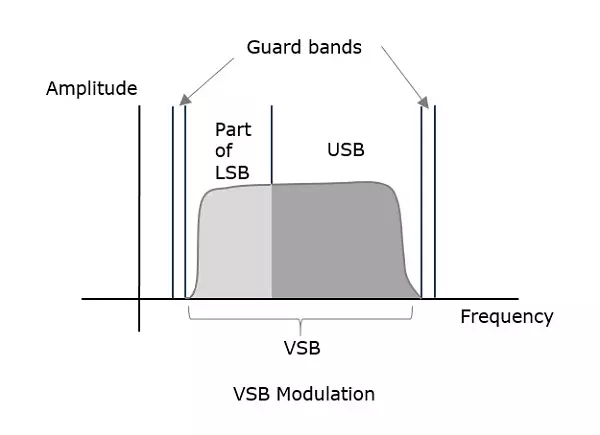 Along with the upper sideband, a part of the lower sideband is also being transmitted in this technique. A guard band of very small width is laid on either side of VSB in order to avoid the interferences. This VSB modulation is mostly used in television transmissions.

The transmission bandwidth of VSB modulated wave will be the total of message bandwidth and the width of vestigial sideband. Two guard bands are laid on both the sides of this VSB signal so as to avoid the interference of signals.

The most prominent and standard application of VSB is for the transmission of television signals. Also, this is most convenient and efficient technique when bandwidth usage is considered.