What is the principle involved in the flight of an aircraft?

All things that fly using wings need air. Moving air has a force that will lift kites, airplanes, and balloons up and down. An aircraft experiences four basic forces, they are 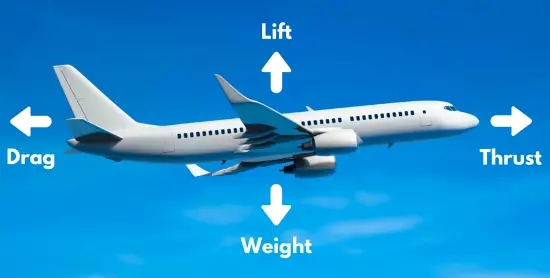 The wing is slightly inclined with the plane of the flight path. This allows the lower surface to face more air molecules than the upper surface. When stationary, the wing experiences an equal amount of pressure on the top and bottom surfaces.

For this reason, the air is stretched out into a larger volume and the same number of air molecules forced to occupy more space when compared with the air molecules at the bottom surface and this is what lowers the pressure. This condition lifts the aircraft up from the ground.

As the F(lift) is more than F(gravity), where "F" represents the force, the aircraft moves upward. The wings are installed with various control surfaces like flaps, slats, ailerons etc. which change the shape of the aerofoil, thus aiding the change of lift forces. After reaching the required height, the wing shapes are adjusted and speed of the aircraft is maintained such that the lift and weight of the aircraft are balanced which enables in cruising at constant altitudes.