What happened to the Saraswati River?

Saraswati River is an ancient river of India, which was considered auspicious as per the Vedas. Not only in the four Vedas, such as Rig Veda, Sama Veda, Yajur Veda, and Adharwana Veda, was the Saraswati river spoken about, but also in the Valmiki Ramayana, the Mahabharata, the 18 Puranas, Manusmrithi and many other scriptures have highlighted its importance.

This river which used to flow on the surface of the earth around 5,000 years ago, (around 6000 to 3000 BC), later on, became an underground river flowing 60 meters below the ground. Many of the modern Indians, didn’t believe it to have ever existed until the government recently confirmed the existence of this mighty Vedic river. 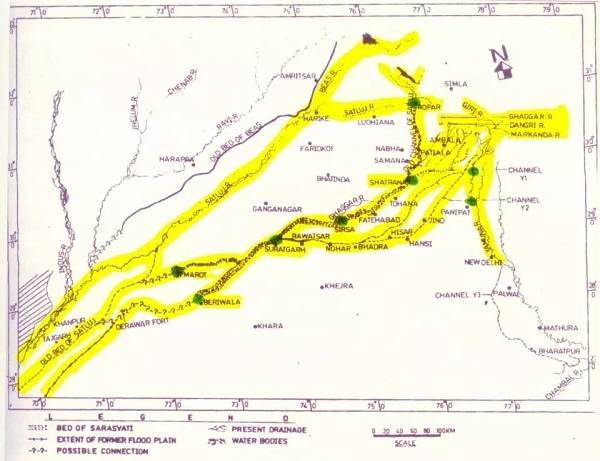 The Indian Space Research Organization (ISRO) which studied the palaeochannels, the remnants of some river, in North-West India has found them to be related to the channels of the Saraswati river.

After a four-year strenuous drilling exercise, the satellite images from an American satellite Landsat, the information obtained from ISRO and from the Vedic source, the efforts to trace the existence of Saraswati river was successful. Bandapunch of Uttarakhand is understood to be the same place of origin of this perennial river. All the conclusions that were drawn so far inform that Saraswati river was probably 1,500 meters long with a width of three to fifteen kilometers and about five meters deep, flowing at a rate of 20 meters a year at the sea. 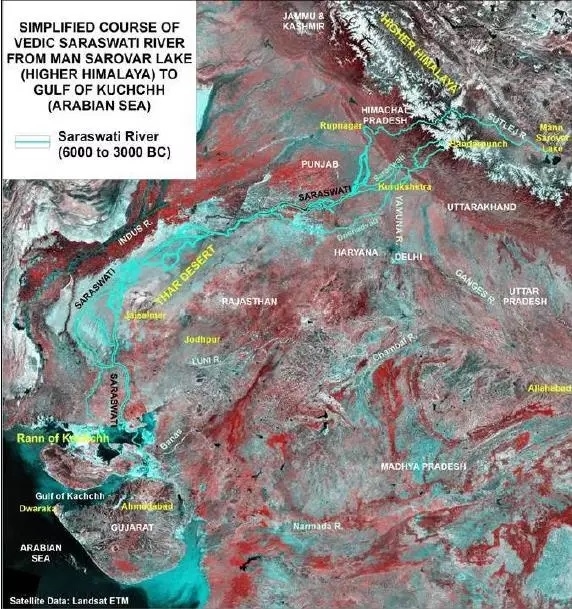 The Course of Flow of Saraswati River

With all the Archeological, hydro-geological surveys and glaciological evidence, substantial evidence has been found that the Saraswati river existed when the Indus valley civilization flourished and ran along the major Harappan sites such as Kalibangan of Rajasthan, Banawali, and Rakhigarhi of Haryana and Dholavira and Lothal of Gujarat. This river is estimated to have taken a rough course through these landscapes starting from somewhere near Uttarakhand and merging into the waters of Arabian sea at Rann of Kutch of Gujarat. 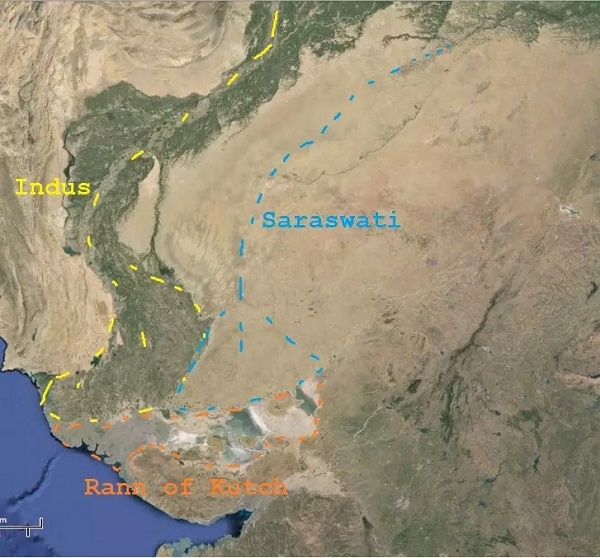 According to the Geologists, the Saraswati river once had three tributaries named as Shatadru, Drishadvati, and the old Yamuna. The Shatadru river was believed to be originated from the Mount Kailash and Drishadvati from Shiwalik hills. It has been found that even the eminent Mahabharata war was fought near the river Saraswati.