What causes the sailing stones to move?

The moving or Sailing stones are found in the Racetrack Playa, which is a dried lake bed, located in the Death Valley National Park of California where the Sailing stones move in a random fashion. Even the heaviest stones which weigh nearly 318 kilograms are moved.

The rock trails were as long as 250 meters, while some trails are straight lines and some of them even have sudden bends and curves which baffled the researchers. There are no logical explanations for believing the reason such as wind or dust devils. 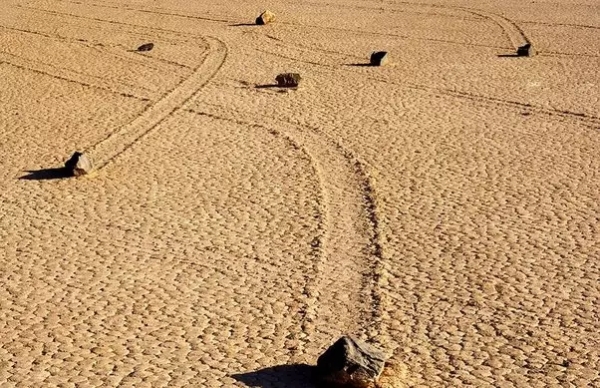 A NASA scientist named Ralph Lorenz who is already investigating on weather conditions of Titan, a moon of Saturn, took interest in the mystery of Death Valley and conducted experiments in 2006, to find out the reason behind these sailing stones.

From his experiments, he found out that when an ice-bound rock was placed on sand, having water on top of it, a small breeze can move this rock until the ice surrounding it gets melted. This movement leaves a trail on the sand according to its movement.

Hence Ralph and his team concluded that under certain winter conditions that occurred in this Death Valley, enough water and ice could have formed around the rocks, in Racetrack playa which when moved by light breeze made them float across the muddy bottom, leaving a trail.