All the nominations received for Padma Awards are scrutinized by the Padma Awards Committee, which is constituted by the Prime Minister. The committee is headed by the Cabinet Secretary and includes Home Secretary, Secretary to the President and four to six eminent persons as members. However, the recommendations of the committee are placed before the Prime Minister and the President of India for final approval.

Who gets the award

Every year not more than 120 people will be given these awards in the months of March and April and the awards are announced on 26th January, Republic Day. These awards are given for achievements in all fields or disciplines where an element of public service is involved. One important fact which many people ignore is the award does not entitle the receiver to use it as a title and cannot be used as a suffix or prefix to the awardees’ name.

In highly deserving cases, the Government even considers giving an award posthumously, but usually, it is awarded to people who are alive. The next or higher category of Padma award can be conferred by the Awards Committee only after a period of at least five years has elapsed since conferment of the earlier Padma award. In highly deserving cases this rule is relaxed. 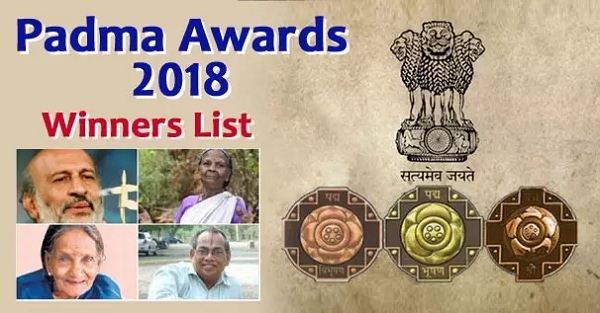 There are many celebrities who have received these awards from since Padma awards are instituted in the year 1954. But due to the historical decision, which was taken by the Modi government, common man also found space in these awards category since last 3 years.

"You will be proud of the fact that today, the common man is being cited for Padma awards without any recommendations. There was a certain methodology of awarding Padma awards every year, but this entire process has been changed for the past three years. Now, any citizen can nominate any person in our country. Transparency has been brought about in the entire process by making it operable online," the PM said.

Here is the list of the Unsung Heroes who have dedicated their lives to working for the poor or have risen from deprived backgrounds to excel in their own fields, who are receiving the Padma awards for 2018.

She is a tribal woman from Kerala. Her specialization is preparing herbal medicines.She makes medicine for snake and insect bites along with helping people to increase memory. She also teaches and the only tribal woman who is educated in the 1950s. She lives in a small hut in a tribal settlement in a forest. Example for simple living and high thinking.

Arvind Gupta is an IIT Kanpur alumnus who made 6200 short films on toy making in 18 languages and inspired generations of students by visiting 3000 schools in 4 decades.

The Gond artist Bhajju Shyam, who is internationally acclaimed for his Gond paintings, a tribal style of painting of Madhya Pradesh is also among the Padma awardees this year. He is born in a poor tribal family and worked as a night guard and electrician to support the family before becoming a professional artist. His most famous depicting Europe, The London Jungle Book sold 30,000 copies and it was published in five foreign languages.

Mr.M.R.Rajagopal is known as Kerala’s medical messiah to terminally ill. M.R. Rajagopal has specialized in pain relief care for neonatal cases is also among the Padma Shri title winner.

India’s first Paralympic gold medalist, Shri Murlikant Petkar who lost his arm in 1965 India-Pakistan war is another winner of the Padma Shri.

Working as a housemaid and daily laborer for 20 years, the 75-year-old Subhasini Mistry has a great heart to build a hospital for poor in rural West Bengal. She is the most deserving candidate for the Padma Shri award.

A farm laborer and the hard working lady Sulagatti Narasamma who also provides midwifery services without any medical facility in the backward region of Karnataka. A true humanitarian.