What are the measures taken to make EVMs tamper proof?

Let me tell you that it’s an EVM machine, not a toy. If anyone can hack mobile towers then I think EVMs can also be tampered with. The results of the recent Gujrat assembly elections (BJP:99-CONG:77) show that there was no tempering done with EVMs and I do not claim this, it has been clarified by Former CEC Mr. Krishnamurthy that the EVMs have done their job well.

How Does Election Commission Ensure the Security of EVMs?

The first level of the check of the EVMs done by the Election Commission months before the actual voting takes place. The procedure is performed in presence of all party reps. And if any machine indicates any glitch, it is scraped there-and-then. So, the prior knowledge of a particular EVM in a particular constituency or polling both is next to impossible.

For paring a ballot unit and control unit, there is a double randomization process. This step makes it impossible for a person to know the exact pairing also which machine will be used at which constituency. The final list of the candidate on the ballot unit is placed on the last day of the withdrawal of the names and not before that and usually 13 days ahead of the polling, the EVMs are again tested for proper functioning and that too in the presence of the part representatives. Post this exercise, the candidates sign a certificate confirming the EVMs are in order.

Finally, before the EVMs are sent to the polling booths, the machines are sealed with a unique security number. This event too takes place in the presence of the candidates and representatives of all political parties who sign on the seal once it is placed. 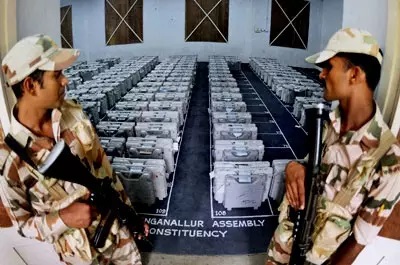 Afterward, the Election Commission places the name of the candidates for each constituency in an alphabetical order to wipe out the possibility of the predictability. Also considering that an EVM can record only 1500 votes how can anyone hacks so many machines.

All this adds to the security measures that have been taken, it’s virtually impossible to temper an EVM.