What are the functions of the stomata?

Stomata are the tiny openings, present in the epidermis of leaves, stems, and other organs, to allow an exchange of gases. The stomatal pore is guarded by two kidney bean-shaped cells known as guard cells.

Guard cells are located in the leaf epidermis. The pair of guard cells have a gap between them which forms a stomatal pore. This pore regulates the CO2 influx from the atmosphere into leaves. The guard cells also regulate the loss of water by transpiration.

It helps in the closing and opening of the stomatal pore.
Functions:
(i) Stoma allows the exchange of gases. Commonly, carbon dioxide is consumed and oxygen is released through stomata during photosynthesis, while oxygen is consumed and carbon dioxide is released through stomata during respiration.
(ii) Through the stomatal pore, the excess amount of water is released from aerial parts of the plant in the form of water vapor through transpiration. 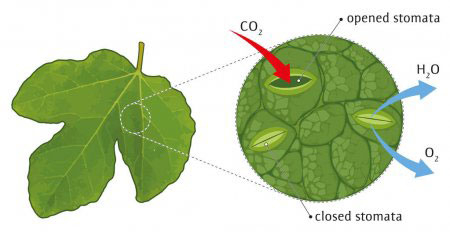