Electric generator was discovered even before the discovery of the connection between electricity and magnetism. Moving electrically charged plates, disks, and plates were used to operate the electric generators and it follows electrostatic principles. The charge was mainly produced by using either of two mechanisms: turboelectric effect and electrostatic induction of turboelectric effect. Such kinds of generators produced low current and high voltage. Generators are very useful as it supplies poise to the electrical appliances during a power disruption. Generators are available in various physical and electrical configurations for use in different applications.

What is a generator? 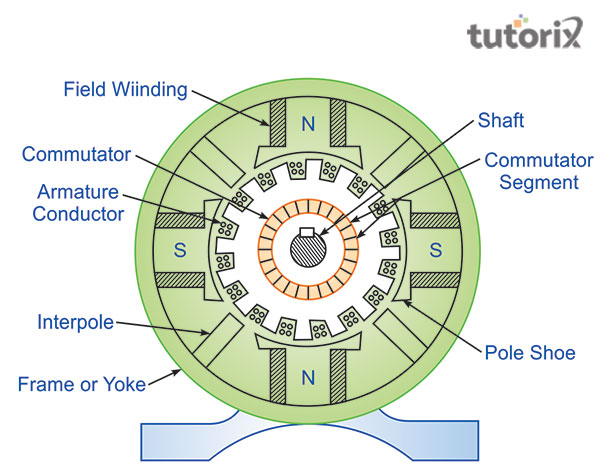 Figure 1: Construction of a generator

Generators are very essential devices that are used for power supplies during the power cut-off. Thus it prevents the discontinuity of regulated activities and affairs without any disruption. Generator mainly transforms the mechanical energy to the electric energy. The generator gets the mechanical energy from the external source.

Figure 2: Working process of a generator

Electric heaters are utilized for the production of electric energy. The electromagnetic induction principle is utilized by generators for converting mechanical energy into electrical energy. In the generator conductor, the coil is placed between the horseshoe magnets. Rapid rotation of conductor coil occurs that results in the production of electrical energy. The conductor coil and soft core together form the armature. The armature connected to the motor gets rotated. The requirement of mechanical energy is fulfilled through engines operating on natural gas fuels. Rotation of the coil results in cutting the magnetic field located between two magnetic poles. Interference of magnetic field with electron within conductor induces electric flow

Generator and its usage

Generators are very useful in emergency conditions of several conditions. It provides power supply to the electronic devices during the shortage of electricity. Different types of generators are applied in different types of situations. The necessity cannot be avoided in any aspect. The importance of generators becomes very important in today's modern era as it provides the continuous flow of electricity. Thus it makes sure that everyday occurrences can be done without any turmoil.

Q1. What is the difference between a portable generator and a standby generator?

Ans. Portable generator provides power supplies'' in the time of power outage but it is the temporary solution. Whereas a standby generator gives the perpetual solution and it is run by liquid propane or natural gas.

Q2. What is the importance of generators in daily life?

Ans. The generators provide the power supplies during the time of power failure. Numerous kinds of generators are used to ensure the continued sustainability of electricity.

Q3. What is the convenience of standby generators?

Q4. Which is the main part of the generator?

Ans. Engine is said to have been the most important part of a generator. The engine of a particular generator is conducted by neutral or diesel gas. The fuel tunes the engine and engine activities of other components of generators.