A two-stroke engine is associated with the kind of engine that utilizes internal combustion to generate a complete power cycle. The two-stroke engine completes a power cycle utilizing two strokes of the piston. Furthermore, this power cycle is completed in a single revolution of the crankshaft. These engines have a distinct property of retaining a high power-to-weight ratio and the power is available within a very shallow range of rotational speeds which are referred to as the power band.

What is a two-stroke engine?

Aa (2020), the two-stroke engines work on a very specific principle that the starting of the compr two-stroke engine is typically referred to as the internal combustion engine that completes a power cycle with two strokes of piston during a single crankshaft revolution. According to Ikpe & Owunnession stroke and the end of the combustion stroke work simultaneously and the intake and the scavenging functions occur simultaneously as well.

The two-stroke engines are identified to have a high power-to-weight ratio. The first commercial two-stroke engine that involved a function of cylinder compression was discovered by a Scottish engineer named Dugald Clerk, patenting his design back in 1881.

Two-stroke engines have several distinct properties that separate them from the other engines like the four-stroke engine. 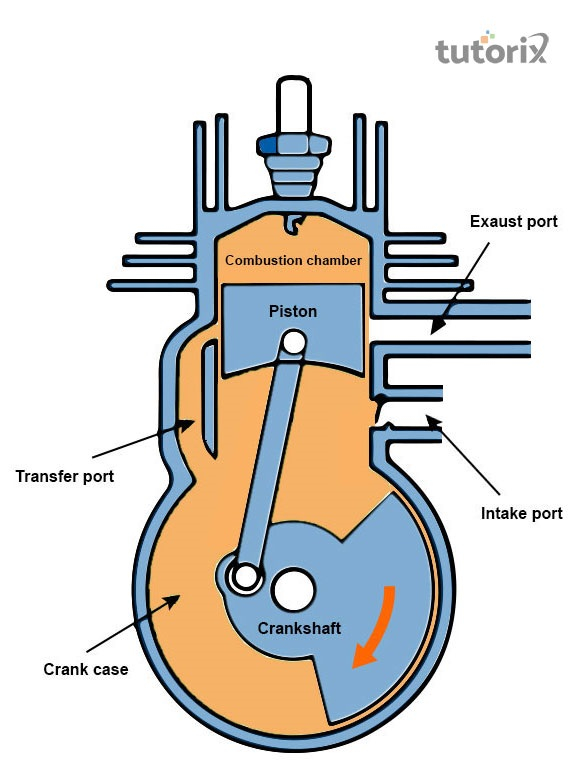 The two-stroke engines are made of multiple parts and they all have their distinct functionalities. The piston helps in transferring the dilating force of the gases into the mechanical rotation of the crankshaft functioning through the rod connecting to it. The crankshaft turns the reciprocating motion into rotational motion. The connecting rod transfers motion from the piston to the crankshaft and it acts as a lever. There is also a mechanical device in the engine that utilizes the stored energy which is called a flywheel.

There is a spark plug in the engine that gives out the electric current into the combustion chamber which further helps in igniting the air-fuel mixture that leads to the rapid spread of gases. There is a counterweight present in the crankshaft that reduces the vibrations that occurs due to the imbalances in the rotating assembly. There are two distinct ports with separate functions, these ports are called inlet and outlet ports these ports generally help in the passage of fresh air along with the fuel to enter and exit the cylinder. 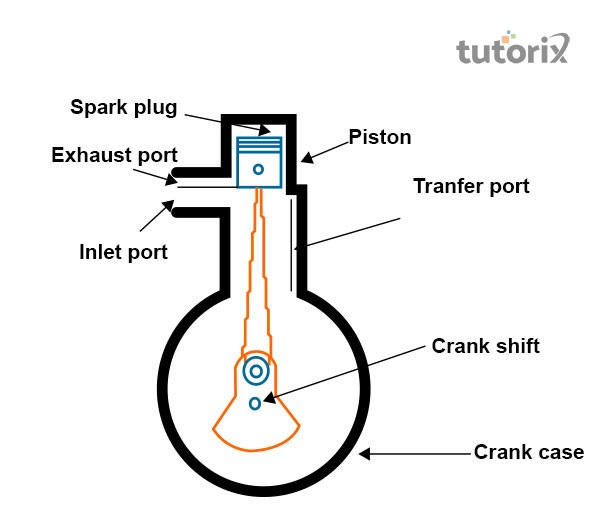 Two distinct cycles occur in the engine cycle the first being the down stroke where the position moves from the top-dread-centre to the bottom-dread centre letting the fresh air enters inside the combustion chamber. The fresh air-fuel mixture further gets inside the chamber of combustion through the passage of the crankcase. In this entire stroke, the crankshaft rotates a 180°

In the upstroke movement, the piston pushes from BDC to the TDC, that result in the fuel-air mixture getting compressed and the spark plug inside the engine ignites the mixture. The mixture then expands and the piston is pushed down. In the case of the upstroke, the inlet port is opened. According to Heywood and Sher (2017), as the inlet port is opened, the mixture gets pulled inside the crankcase that enables the mixture to get inside the combustion chamber during the down stroke. However it continues to remain in the crankcase till the position moves up to the TDC and in this stroke, the piston makes a 180° rotation.

Q1. What is a two-stroke engine?

Ans. Two-stroke engines are a variant of an internal combustion engine that completes an entire power cycle with a two-stroke of the piston. This power cycle is compelled using a single revolution of the crankshaft.

Q2. Who discovered the two-stroke engine?

Ans. A Scottish engineer named Dugald Clerk patented his design of the first commercial two-stroke engine that had the functionality of cylinder compression. He patented this design in the year 1881.

Q3. What are some of the distinct shortcomings of two-stroke engines?

Q4. What are some of the advantages of a two-stroke engine?