The properties of the object

Every object that can be seen in any corner of the world is made of some specific material. Based on this material the views of and characteristics of objects, change. The material is directly connected to the light transmission process that made anything visible in this world. The object is letting the light pass or it is creating an obstruction, depending on what the three types of objects are named. It all depends on a very basic thing, the material of the object. The material decides the light will pass in the amount of hundred per cent or Less than that or will completely get blocked. 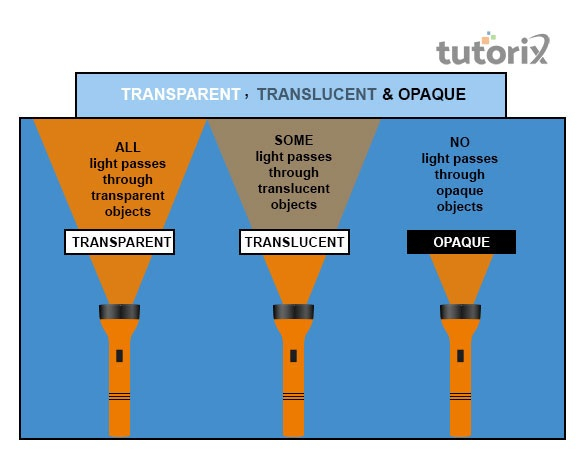 What is a transparent object?

An object that allows complete light transmission is called a transparent object. It can be defined as if anything can be seen through any object, which means it allows the light to pass, is known as a transparent object (Chen, Han & Wong, 2018). Materials such as water, air, or glass (which is completely clear) are considered transparent. In the process when light encounters those materials, the light will pass completely through them. For example, objects made with clear glass are see-through objects.

What is a Translucent Object?

What is an Opaque Object?

An object that does not allow any kind of light transmission is called an Opaque Object. For clear perception, it can be defined as if through one object nothing can be seen at all, is called Opaque Object. Objects such as wooden doors, bricks, walls, plywood’s are the perfect example of Opaque objects. Those solid objects do not allow light to pass and create obstruction in the process of light transmission and as a result, one person cannot see anything through them.

The main thing that is in common and at the same time, which creates a difference between these 3 types of objects, is light. The light will travel completely through, partially or will get blocked depending on the material of the object. Such objects that go with the 1st thing, meaning it allows a hundred per cent light transmission so anything can be seen through the object are called Transparent. When the object allows partially light transmission, so one can see partially through the object, is called the translucent. This kind of object is between the transparent and opaque object (ontarioca, 2022). Objects that do not allow light to pass through, so it does not allow people to see through them, is called an Opaque object. 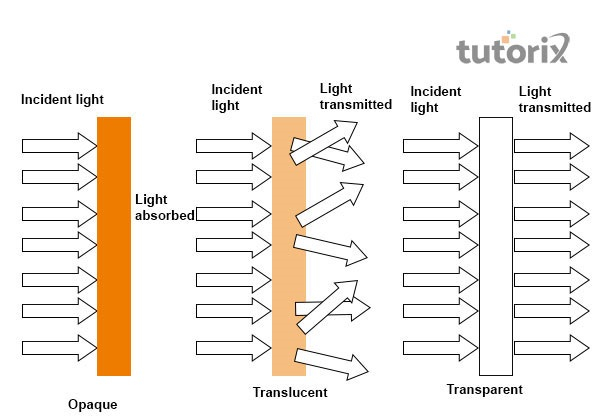 There are many differences between these 3 types of materials that are based on the amount of light transmission. For example, in light transmission, where transparent objects allow all kinds of lights to pass, however, the translucent object allows the partial light transmission and on the other hand, the opaque object completely blocks any kind of light, which means it has zero penetration of light.

Based on visibility, transparent tops the list. It has the maximum visibility, where the visibility of translucent objects is not clear completely, and the opaque has no visibility at all.

Based on shadow, the transparent object allows a hundred per cent of light it does not create any kind of shadows and as the translucent object partially allows the light, so it creates a minimum amount of shadow. The opaque creates full shadow because it does not allow light at all.

Those 3 kinds of objects differ based on their density too. Where the opaque has the highest density, the translucent has less than the opaque and the transparent object is considered the object with the least density.

The light consumption of objects completely depends on the materials and that too depends on the suture of atoms and molecules. Simply by absorbing the wavelengths of lights electrons transit to another level of energy. In nature, smoke and fogs are considered translucent, because it is all blurred when one sees through them. There are animals underwater that are near about transparent, such as jellyfish. Opaque glasses are used in houses to ensure privacy because it is not a see-through object.

Q1. What is the basic difference between Translucent, transparent and Opaque Objects?

Ans. The basic difference between these 3 objects is based on light transmission. Transparent objects allow complete light transmission, whereas the translucent allow partial light, and opaque blocks every kind of light.

Ans. The opaque object completely blocks the light; as a result, it creates a complete dark shadow.