Trades winds are the permanent east to west winds that flow on Earth. In ancient times, in the particular legion of the sea, the sailor got the necessary winds to sail their sips, and from this particular incident the wind derived its name, trade winds. Trade winds are predictable and reliable wind which always blows in the same place towards the same direction. The name trade wind, was originally derived from the 14th century onwards when it reached its highest pick. The importance of trade winds holds a high significance in the regulation of vessels in various oceans. Sailors find this wind very helpful in the sailing of ships in several oceans while passing through equatorial region.

What are meant by trade winds?

Trades wind refers to the winds which flow to the equator from north to east in Northern Hemisphere, and from south to east in southern hemisphere. As opined by Long et al. (2020), the sailors of the ancient times depend on this wind for sailing tester ships as it is very reliable wind that always flows in the equator. As opined by Maher et al. (2018), trade winds are the air currents that are closer to the earth's surface. This particular wind generally blows from east to west near equator.

Why do trade winds flow from the east to the west?

The rotation of the earth on the axis made the trade wind blow to the west part. The Coriolis effect which is the offshoot of earth's rotation, makes the air to take a curve shape when it moves in the atmosphere. As opined by Li et al. (2019), the winds that are converging on Equator come from northeast in Northern Hemisphere and southeast in southern hemisphere. Trades winds are found near about 30° south and north to equator. Just in the middle of equator, there is no air taht arises and thus this particular region is called doldrums.

Trade winds and Doldrums and their effect on weather

The sun shines directly on the equator and it causes the scoring geat in that region. Particularly because of this fact the equatorial region becomes very warm and the air rises up in atmosphere. As opined by Kennel & Yulaeva (2020), the particular region in the equator which does not possess any air is called doldrums. the winds of this region become very hot and it also possesses the much of vapor in it. After the air goes high atmosphere, it gradually becomes very cool, accumulates clouds,s and then causes heavy rain in tropical regions.

As opined by Stevens et al. (2020), in the Atlantic ocean this is transformed in stim which is further known as hurricanes. NOAA’s GOES-East satellite notes the impact of the trade winds as well as the movement of the tropical storms and hurricanes to the USA. Trade winds play a very important role in sailing of the different ships in these. The hit atmosphere of the region of equators gives rise to the trade winds. The trade wides are always present in the equatorial region of earth and it is a very reliable wind especially to the sailors as it helps them to smooth drive the sail without any hustle. 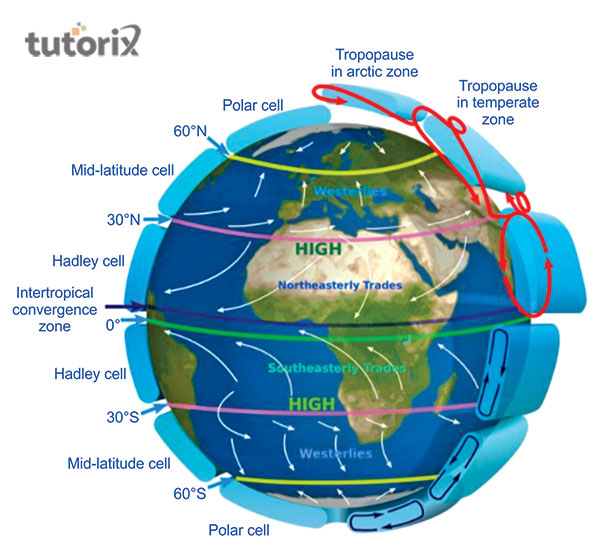 Trade winds are the always present both in the north a south directions of equator. Trade winds are very important as it allows the sailor to sail the ships across the ocean. Trade winds also help to drive various vessels from America to Asia. The sailor depends on this type of wind to drive their ships in a smooth way. During the time of mid-summer, in Northern Hemisphere, the moving trade winds that move to the westward, and south of winds that move to the northward. These winds carry the dust from the Sahara desert which movers to the southern periphery.

The impact of trade winds

Surface air which blows from the high-pressure belt of the subtropical region to equator is deflected to west both in north and south hemisphere by Coriolis effect. This particular effect is very important in the field of studying the weather report. Coriolis effect possesses a momentous ole in movement and nature of winds.

The wind is an important factor in atmosphere. Wind plays an important role in determining the weather and climatic condition of earth. Several weather patterns rely on the wind. The movement of wind depends on many factors and it greatly impacts the atmosphere of earth. Trade winds are considered as one of the most important factors in wind movement. Trade winds determine the smooth regulation of multiple ships and vessels.

Q1.What is the impact of trade wind that can be noticed in the atmosphere?

Trade wind generally helps in the moving of the ships and thus it helps the sailor to direct the ship is particularly correct direction. Trade winds played a significant role in driving the ships in the ocean.

Q2.What is the main characteristic of trade wind?

The most important characteristic of the trade wind is it flows in tropics that are situated in sub-tropical of the high-pressure belt to equatorial low-pressure belt which is situated between 30°S and 30°N.

Q3.How does trade wind affect the climate of tropical islands?

Trade wind is particularly warm by nature and thus it carries a lot of moister from the wind. This causes a great amount of rainfall in tropical islands.

Q4.Wahr is another name for trade winds?

Trade wind can also be called as tropical easterlies. It continuously flow both in the northern and southern hemisphere.