Identifying the path of the white light through a triangular prism is an important scientific experiment. It is used to exhibit the spectrum of visible light. Different types of light hold different colors when they pass through a triangular prism they are divided into multiple spectra and thus by this experiment is found that a mere white light possesses the different colors in it. This experiment was first done by Isaac Newton in 1665.

Some significant facts of Triangular Prism

Triangular prism is generally a polyhedron that has two parallel bases. When a particular ray of light divided into two refractions while travelling through the prism, it separates in certain angle from the real path. 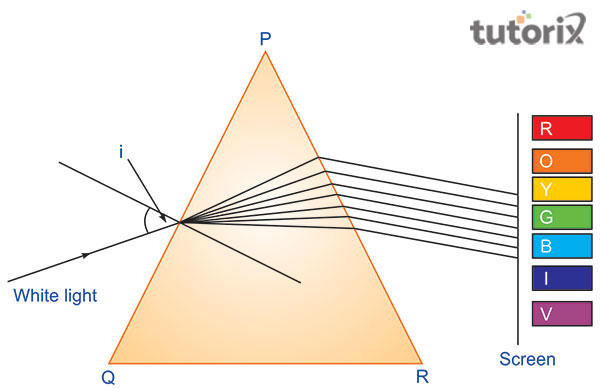 When the beam of light is reflected on one side of the surface of the prism it divides into seven colours. As opined by Hess et al. (2020), this particular phenomenon demonstrated by a prism is named dispersion of light. This collective band of the seven colours of the lights is known as spectrum.

Glass prism exhibits the various refractive indices which include the several color compounds of the white light. It happens because of the varying speed of each color. Thus, different colors come from the prism being different and thus becoming distinct (Smith & Karunadasa, 2018) White light spreads into VIBGYOR (Violet, Indigo, Blue, Green, Yellow, Orange, and Red) with Violet showing maximum deviation and red showing minimum deviation.

The aim of the experiment is to identify path of rays of light by glass prism. 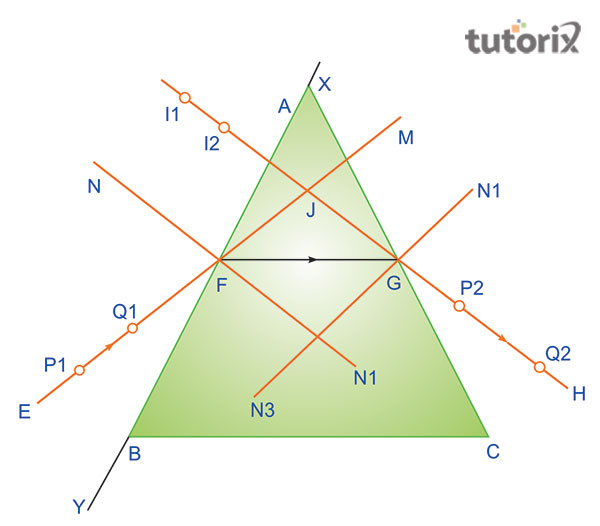 Figure 2: path of rays of light

White paper is fixed on the drawing board with cello tape.

EFGH describes a certain path of the light through a prism and it is presented in the diagram.

The refracting face of glass prism needs to be smooth and transparent and should be free of broken age or are bubble. It should be triangular in shape. A sharp pencil is needed for drawing the boundary of prism as well as beams of lights. As opined by Zhdanov et al. (2018), the alpins should be shaped and needs to be fixed vertical to the plan of paper. 6m distance is needed between alpins. It gives the perfect accuracy to find the direction of the refracted ray and incident ray. The feet of alpins should be adjusted always and not the head. Pins must be circled and dotted. Angle of incidence must be from 30° to 60° (Taravati & Eleftheriades, 2021). The appropriated arrows essentially need to be drawn to indicate the direction of incident ray, emergent ray and refracted ray.

Prism refers to an optical object which has a transparent, polished and flat surface which refers the lights. A prism is general used to experiment the refection of light.

Q2. Which unit is used for refractive index?

Refractive unit doesn't nit possess any unit. This is because of the fact that it is the ratio between speed of light in particular medium and in vacuum.

Q3. What is meant by dispersion of light?

It refers to the dispersion of white light splitting into seven different colors. This phenomenon happens when the light travels through a lucid medium.

Q4. What occurs when the incident ray enters into a prism?

An incident ray generally bends to normal while passing through the prism. It happens because the ray changes its original path and becomes deviated.