In physics, total internal reflection is regarded as a complete reflection, associated with a ray. A particular medium such as glass or water is required for the reflection of a ray. The ray reflects from a surrounding surface to the medium. In case of greater value of the angle of incidence, a certain limiting angle is found to have formed. This limiting angle is known as the critical angle. The sparkling diamonds and mirage are real-life examples of total internal reflection.

What is total internal reflection?

Total internal reflection takes place at a time when a ray travels from a denser medium to a less dense medium. The density of these mediums is recognized based on optical view. 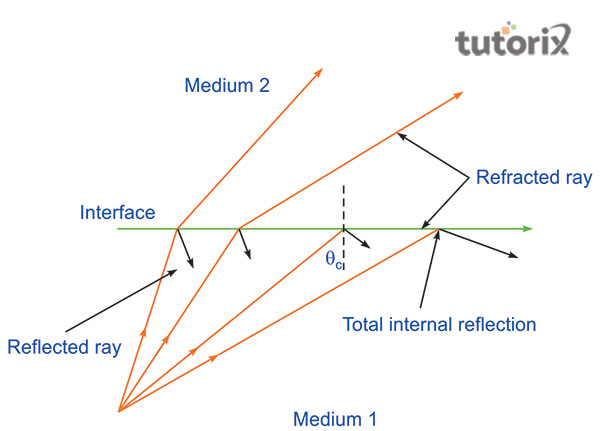 At the time, when a ray travels from medium 1 to medium 2, the density changes, and as a result, the ray is refracted. The density of medium 1 is considered here as dense as the other medium. The refracted rays are seen here to be bent more than normal. In a specific angle of incidence, an incident light’s refraction angle is situated along with the angle of the surface. This particular angle is known as the critical angle (Zhu, Walsh & Semperlotti, 2018). If the refraction angle’s value is greater than 90 degrees, the refracted angle comes back to the medium and that phenomenon will be total internal reflection.

There are two most important conditions under which TIR (Total Internal Reflection) takes place. The first condition is to ensure that the ray travels from a denser medium to a low dense medium (Goodling et al. 2019). The second condition is to ensure that the value of the angle of incidence is greater than the value of the critical angle. Both of these conditions are to be met to perform proper action of TIR. As an example, if a ray is traveling from air to water, TIR will not take place as the ray is traveling from a less dense medium to a denser medium in this situation.

The formula of TIR

The value of TIR is extracted by using a significant formula. Based on Snell’s law this equation has been developed.

The first example of TIR can be presented by taking a fish or a driver's eye and visual display method. For instance, when a fish is looking upwards it can see the sky.

In the case of looking at a larger angle, the fish can see the reflection of the pond's bottom at the surface of the water (Villanueva et al. 2018). 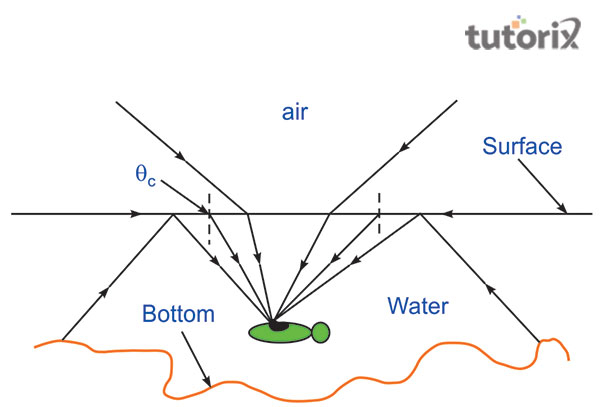 As a second example, internal reflection’s occurrence at a significant interface can be mentioned. At that time when a TIR takes place at a particular interface, that interface acts as a perfect reflector (Tinnemann et al. 2019).

In the mechanism of binoculars as well, this process is utilized. In binoculars, crown glass prisms of 450 are used in the place of a mirror. This helps in reflecting the light in binoculars (Usik et al. 2019). All the angles, situated at the sides of a prism are 450. This angle is greater than the value of the critical angle for crown glass which is 410. 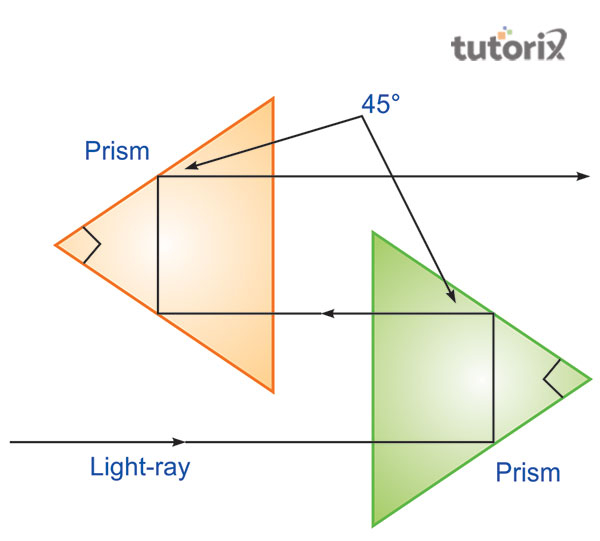 Figure 3: Arrangement of prism in a binocular

In almost all fields of fiber optics, total internal reflection is widely used. In a telecommunication system, TIR is used. In the creation and development of automotive rain sensors, this phenomenon is used (Sun et al. 2018). In creating windscreen wipers as well, wide usage of TIR is found. Another important application of TIR is found in the preparation of Optical fingerprinting devices.

TIR enables light to transmit within a glass fiber as well. That light is often found to be reflected from the sides of fiber and always follows a path. At certain times, light can be transmitted around corners with the help of glass fiber. As the bends of the fibers are not sharp, the light is found to strike at a greater angle than the critical angle.

Q1. What happens when the value of critical angle and angle of incidence are equal?

At a certain time, both the critical angle and the angle of incidence are equal in value. As a result, the angle of refraction is found to be 90 degrees.

Q2. What is the reason behind the reflection of a diamond?

All three things, reflection, dispersion, and refraction are the reason behind the shine of a diamond. Reflection takes place when the light hits the surface of the diamond and bounces back.

Q3. Who has firstly proposed the concept of TIR?

A German mathematician, Johannes Kepler firstly presented the concept of TIR. After that Willebrord was another person, whose contribution is not negligible in this field.

Q4. What is the most important condition of TIR?

The light has to travel from a less dense medium to such a medium that is denser than the first one. This condition needs to be followed at all times of TIR.