To measure the thickness of sheet using Screw Gauge

In order to get the measurement of a sheet made with any metal, different tools are used including screw gauge and Vernier Callipers. Using this particular measurement tool, one can be able to measure the width of a metal sheet in a more precise manner that is up to 0.005 mm. The screw gauge has two successive threads that are separated by a similar amount of space. Focusing on such a concept of physics, the current tutorial will explain the experiment for measuring the thickness of a sheet by using a screw gauge.

The core intention of conducting this experiment is to determine the thickness of a sheet by using a screw gauge.

The apparatus that is required for this particular experiment of physics are very less in number in comparison to the other complex ones. For this experiment, only three apparatuses are required. The names of the apparatuses are screw gauge, a magnifying glass, and a paper sheet.

The specific measuring tool named screw gauge has been made with a metal frame of which the shape is U. The main application of this particular tool is to measure the dimension of tin items which have a width of not more than 0.01mm. The tool has been made by attaching a hollow cylinder to one side of it, inside of that the Grooves have been encrypted that allows a screw to pass through. Parallel to the axis of the screw a pitch scale or main scale has been attached while a sleeve has been fastened to the other side of the screw (Physicsmax, 2022). In order to divide the head of the screw into 100 segments, a head scale has been placed. A spindle is located on the flat surface of the screw. To the opposite end of the frame, an Anvil has been attached. 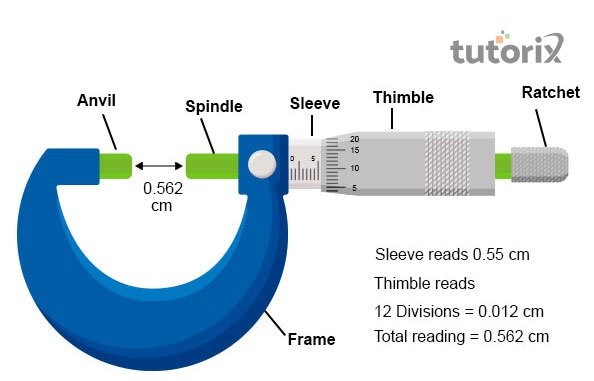 In a time of rotation by one division, the smallest count has been determined by the distance travelled down by the screw on the axis. Based on this, the principle of least count can be found by the ratio of pitch to the total number of divisions in the circular scale.

Prior to conducting this experiment, finding the zero error has been mentioned as a crucial factor in this experiment. The zero-error can be determined by rotating the screw completely until it strikes the anvil.

The procedure of this experiment includes the determination of the value of single linear scale division. By making contact between anvil and Spindle, the calculation of zero error can be found. At this time, the sheet needs to be placed over the anvil and the spindle head needs to be moved toward the anvil (Singh et al. 2020). It will come to a halt if the head rotates without moving the screw. Then, the number of the division scale is required to be counted that are visible to the cap's edge. Based on this the reading (IV) has been considered a linear scale reading (L.S.R). The number of the liner scale is required to be noted that lies on the line of reference for determination of the total reading of zero correction in every case.

Calculation and result based on observation

In each observation, the value of t has been determined and the value of t0 has been recorded. The reverse value of t is used to be placed in the column 4b. These determinations from this experiment help to provide the thickness of the sheet with the unit millimetre.

Q1. What does the screw gauge range imply?

Ans. The maximum length of the main scale can be referred to as the range of the screw gauge. The measurement section of this tool is designed within the range of 25mm.

Q2. Does the diameter of the skew vary in accordance with the change in the temperature?

Q3. How is the screw gauge measured?

Ans. The measurement of the screw gauge is conducted based on the co-responsive imperial system to a certain fraction of an inch diameter. Based on this the ability to measure this tool is considered accurately up to 0.1mm.

Q4. How are gauges calculated?

Ans. The mathematical representation of the formula for measuring the gauge is (100) x (mils), as an instance it can be taken that 0.3 mils = 30 gauge.