To find the Surface Tension of Water by Capillary Rise Method

Capillarity is a combined function that helps determine the water’s surface tension with the utilisation of the method named the capillarity rise. In this method, the adhesive and the cohesive forces are the causing liquid or water to rise in the pipe to a tiny diameter. The cohesive force also functions at the same duration to underrate the length between the molecules of water by drawing the meniscus up to the bottom against the gravitational forces. In this tutorial, gaining knowledge on the surface tension with the utilisation of the method called the capillary rise. The usefulness of the capillary rise method helps understand the surface tension of a liquid substance by applying a formula. This function also used the travelling microscope for the measurement purpose.

The attractiveness of the net force used in the capillary rise method causes the surface of the water to get contracted with the interior walls of the repulsive forces. The contraction in the point to the area surface can make the minimum area of its volume. The attraction of the forces can make the utilisation of different formulas (Thefactfactor, 2022). The spherical slides of water are a knowledgeable sight, for instance, when the exterior energies are insignificant. 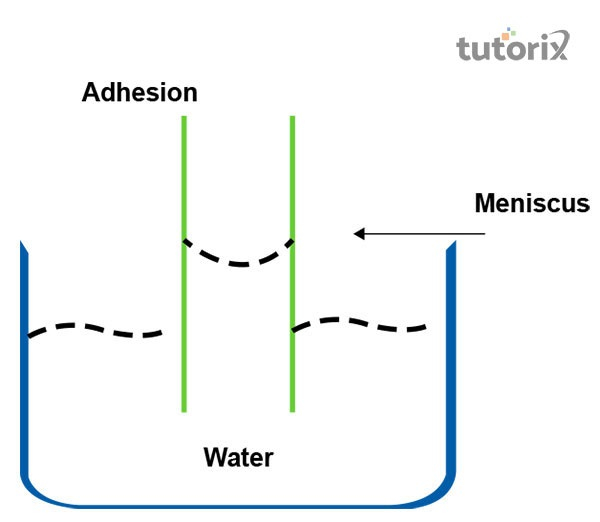 The capillary action can be expressed as the ascension of water via a slim pipe, cylinder or an absorbent substance due to adhesive and cohesive forces that are making the interaction between the container’s surface and water. When the intermolecular adhesion of water itself is inferior substantially to the surface of the substance, as a response it interacts with the capillarity appears. Additionally, as the consequence, the container’s diameter and the gravitational forces will specify the quantity of raised water (Sciencedirect, 2022). In this method, the equilibrium is advanced when the strength of the surface is counteracted by the gravitational force on the water contains in the tube.

The followings are the primary forces used in the determination of the water processing as a capillary action:

The bonding of the intermolecular of a particular substance attracts the mutual forces to manage a certain amount of water shape.

The surface tension can be estimated by applying the unit; Newton/metre.

The occurrence of the tension among the molecules that are not similar is known as the Adhesive force.

The formula that is used to estimate the surface tension is mentioned in the followings: T = r(r + h/3)pg / 2cos𝛳

A student who wants to experiment with the estimation of the surface tension of water using the capillary tube method needs to arrange some instruments. In the first stage, an adjustable stand needs to be placed on the table and the base needs to be placed in the horizontal format by using the screws for levelling. The arrangement of fresh water is an essential object. Overall, three capillary tubes are required in different radil (Vachaparambil & Einarsrud, 2019). Vertically aligning the capillary tubes is essential to make the height adjusted. 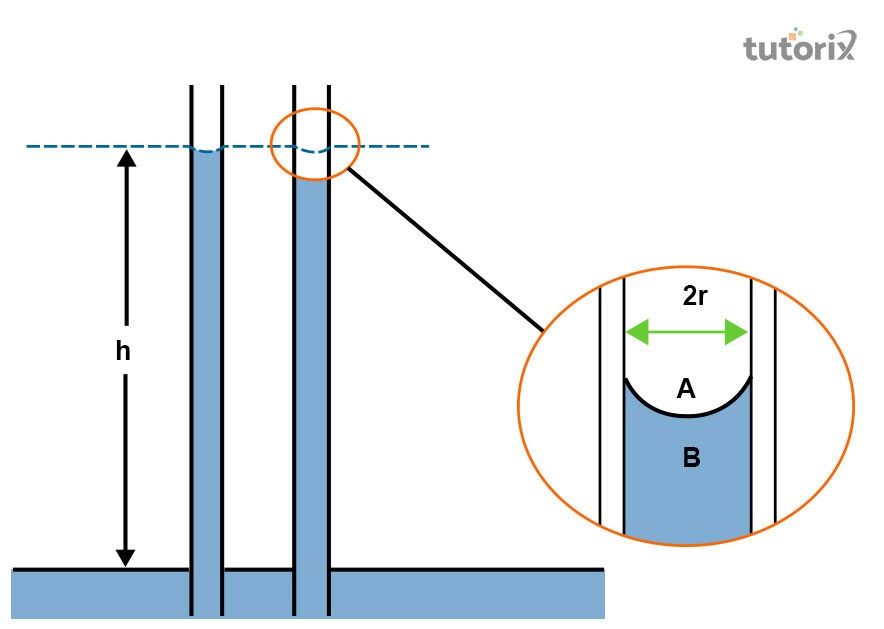 Figure 2: Placement of a capillary tube

Starting the steps with fixing the supplied tubes on a plate made using glass parallel to each other is required. The lower ends of the tubes, need to be engrossed in water, at the next stage, students should fix the tubes closely as possible. The needle needs to be fixed at a 1 cm distance from capillary tubes (Corrosionpedia, 2022). The vertical forms are the formation of the tubes where the immersive in water. In the next step, students need to put focus on the clamp stand near the beaker. The screws attained in the microscope and the utilisations of the convex lens are useful in the additional crosswire.

Additionally, in the next stage, the student needs to turn the screws of the microscope in the horizontal orientation to consider the viewpoint of the capillary tube that is placed next to one and again follow the same step to get the right position of for the surface tension value of water. By lowering the tip of the microscope, a student can make focus on the two cross wires which will get the vertical reading by the scale ‘R’ (Kim et al. 2018). With the mentioned steps, students can make the appropriate measurement of the value for the surface tension of the water using the capillary tube.

Table 1: The internal diameter of the capillary

In this tutorial, the researchers have attained to make the value of the surface tension using the capillary method. The highlighted function of the components can help in accelerating the accuracy by applying the capillary rise method. Students need direction to use the instruments required in the experiment. Moreover, the application of fresh and clean water is required to make the measurement more appropriately. The applications of the capillary action are evident in all forms of fundamental properties.

Q1. What is the surface tension of water?

Q2. What is a possible application of the capillary action?

Ans. Conceivableble usefulness for capillary action is as a reference to renewable energy. By permitting water to ascend via capillaries and evaporate once it advances at the shelter.

Q3. What is the Capillary rise method?

Ans. The method which is most convenient and simple to retrieve a result based on the utilisation of a clean capillary tube which is filled with a liquid. This method is useful to calculate the surface tension force.