As each consumer has a limited budget, they are faced with the problem of utilising it in the ‘best’ way. With the various goods and products available on the market, this means spending their limited resources in a manner such that the consumer can avail the most benefit or happiness. Thus, the Theory of Consumer Behaviour studies the preferences of consumers and how they utilize their budget to obtain the most happiness according to these preferences.

This theory can be divided into Utility, Budget, and Demand, with each having its effect on the overall outcome. in this tutorial, we’ll go through the utility aspect of the Consumer Theory in detail.

The word utility, in this case, refers to the amount of satisfaction a consumer obtains from a certain commodity. In more specific terms, utility can be said to be the want-satisfying power of a certain commodity for a consumer. So, the greater the utility, the more likely a person is to spend their income on it, while a lower utility would lead to less expenditure on the commodity.

Along with being specific to each commodity, utility is also variable for each consumer. This is because the wants of every consumer are different and thus, they will be satisfied differently by a commodity.

For example, cold drinks might have high utility for people in a warm environment while it would be lower in a colder region.

However, how can you understand utility in a way that can be quantified and calculated for economic purposes? Well, this is where the Cardinal Utility Analysis is used. This method assumes that utility can be shown in numerical values such that specific values of utility per commodity are definable. To make more sense of this, let us try to understand how the Cardinal Utility Analysis measures utility.

Types and Measurement of Utility

The two primary measures of utility are -

Total Utility (TU) refers to the total utility obtained from the consumption of a commodity. This value is a complete value that does not take into account the individual utility of each unit but indicates the aggregate of satisfaction that a consumer derived from a particular commodity.

Thus, it can be assumed that

Consider that consumer A has purchased and consumed 4 apples.

This is because marginal utility is the change in TU upon consumption of an additional unit.

As you can see in this table above, the marginal utility makes up the difference between each subsequent unit of commodity consumption and when added together, provides you with the TU. Another visible thing is that the MU is rapidly decreasing to the point where it reaches below 0, meaning utility is lost upon consumption. This happens due to the Law of Diminishing Marginal Utility.

According to the Law of Diminishing Marginal Utility, each consecutive unit of a commodity that is consumed will provide lesser MU to the consumer.

To understand this, you can think of yourself as the consumer. Now, imagine that you wish to eat a banana and go to the store to eat some. While the first banana you eat will provide you with immense satisfaction, as you go on, each additional one will feel less tasty till the point where you don’t want to eat anymore. Thus, as you continue to consume a commodity, the MU from each additional unit will gradually fall.

This approach is known as Cardinal Utility Analysis and can be used to derive the demand curve for certain products. However, cardinal utility analysis only considers the utility in numbers and cannot indicate the behaviour and preferences of consumers when faced with various commodity bundles. In this case, the ordinal utility analysis is used.

For example, let’s say you are now able to purchase mangoes as well. In this situation, if you initially were to buy 5 bananas, you might buy 2 mangoes and 2 bananas instead as this would provide you with more utility and a chance to taste both fruits. Thus, you would have substituted 3 bananas for 2 mangoes to obtain the same level of utility.

This is called the Marginal Rate of Substitution (MRS) which can be defined as the rate at which a consumer will substitute one commodity for another so that the TU remains constant. You can also represent this data graphically in the form of an indifference curve. 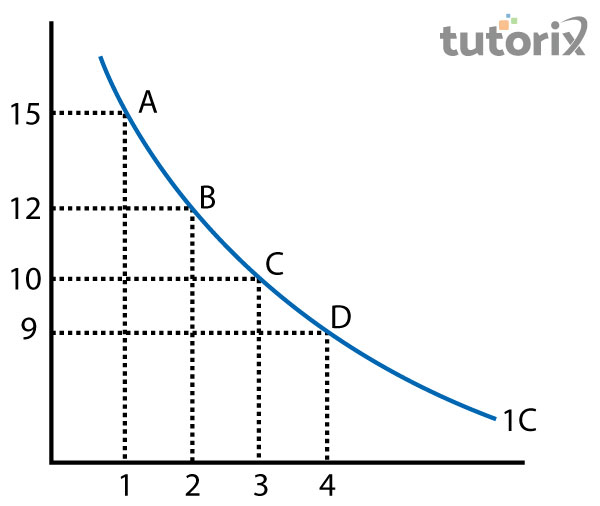 1: What is utility for a consumer?

Ans: The utility of a commodity is the amount of satisfaction that a consumer can derive from consuming it. This value defines the demand a consumer has for a certain commodity and can also define how much they are willing to consume.

2: Does a higher indifference curve provide greater or lesser utility?

Qns3: What is an indifference map?

Ans: An indifference map is a combination of various indifference curves on a single grid. Each of these indicates a different level of utility that can be derived from consuming certain combinations of two commodities.

4: What change occurs to the marginal utility for each additional unit of a commodity consumed and why?

Ans: As additional units are consumed, the marginal utility derived from each one will gradually drop and can even go below 0. This is because according to the Law of Diminishing Marginal Utility, every additional unit of a commodity consumed will have less want-satisfying power due to which the MU will drop.